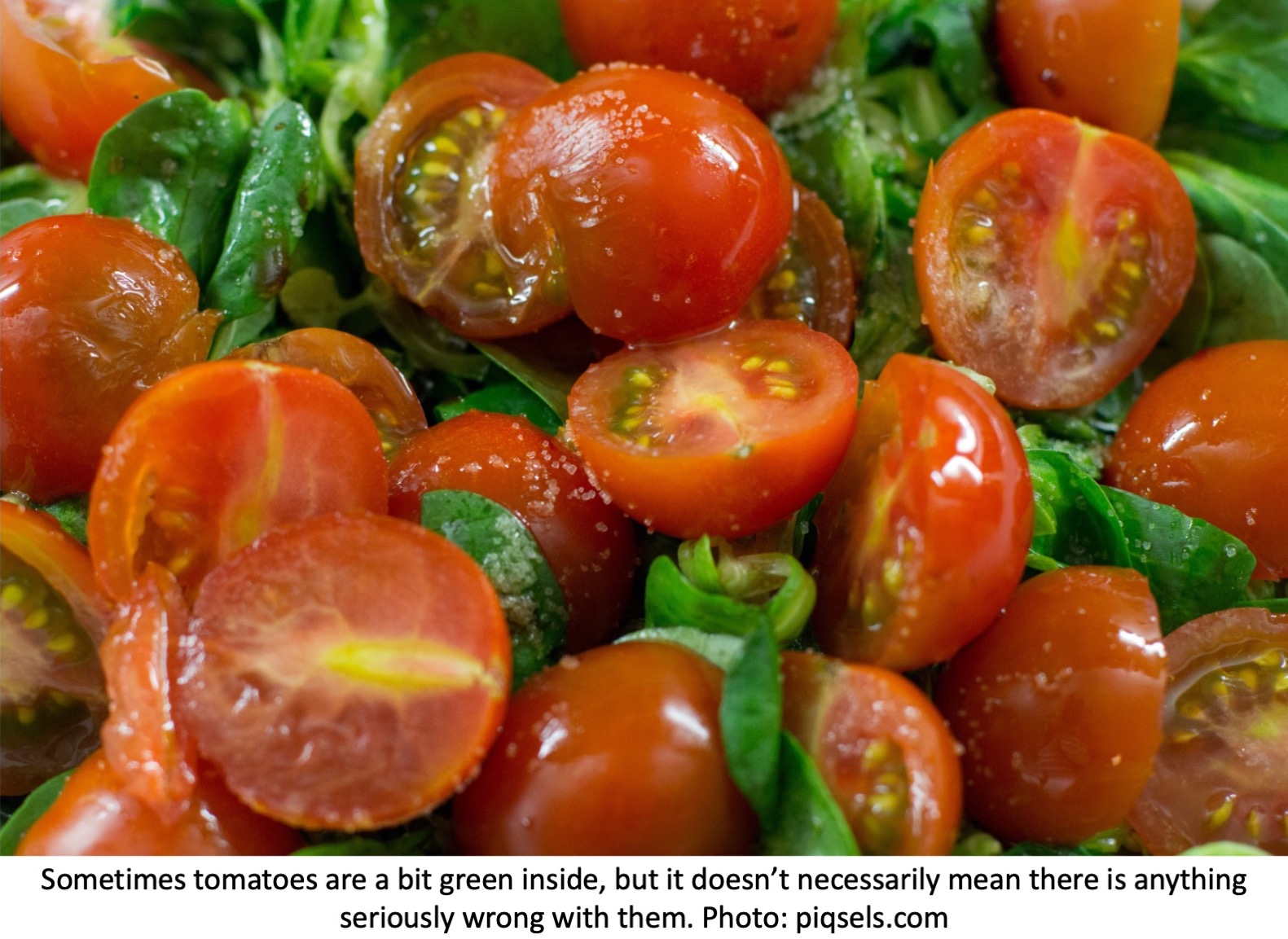 Question: I just harvested my first tomatoes and discovered the inside was still greenish. Is this normal? Are they still edible? This is my first time growing tomatoes and, in fact, growing vegetables of any kind!

Answer: There are many possible reasons as to why certain tomatoes retain a bit of green tissue inside their fruit.

To start with, this is quite normal for certain tomato varieties. This especially true of heritage tomatoes, some of which, like ‘Everett’s Rusty Oxheart’ and ‘Thorburn’s Terra Cotta’, tend to have quite a bit of green inside, even when grown under perfect conditions. In fact, there are tomatoes that are green through and through even at full maturity, such as ‘Aunt Gertie’s German Green’ and ‘Green Zebra’. Green inside or not, such tomatoes will be perfectly edible and delicious.

In other cases, though, green flesh inside the fruit indicates a problem.

Tomatoes usually mature from the inside out, so are usually quite red inside even before the outside has taken on its final coloration. However, maturation doesn’t always go smoothly. Stresses of various sorts can cause the fruit to mature unequally. The problem can be due to:

The best way to avoid the above problems is simply to give your tomato the best conditions possible. Obviously, you can’t control the weather, but you can make sure your plants are well watered and fertilized, grow in rich, friable soil, are kept a bit cooler by mulching, are treated against insect problems without delay and don’t suffer needlessly due to the removal of healthy green leaves.

Yes, You Can Eat Them

And don’t worry: even if your tomato are a bit green inside, they’re still edible.

If they’re perfectly mature, as in the case of a variety that is normally green inside, they should be delicious. Just bite in!

If you harvested yours a bit early and their greenness comes from not being quite ripe, you’ll still find them very tasty, but perhaps not yet at their best. Try letting them mature a few days longer in a dark cupboard or brown paper bag. Many will ripen perfectly when so treated.

And if ever yours are just not as flavourful as you think they could have been, try cooking them up and using then in a recipe of some sort rather than eating them fresh. Cooking is a great equalizer when it comes to not-quite-perfect tomatoes!

0 comments on “Why Are My Tomatoes Green Inside?”