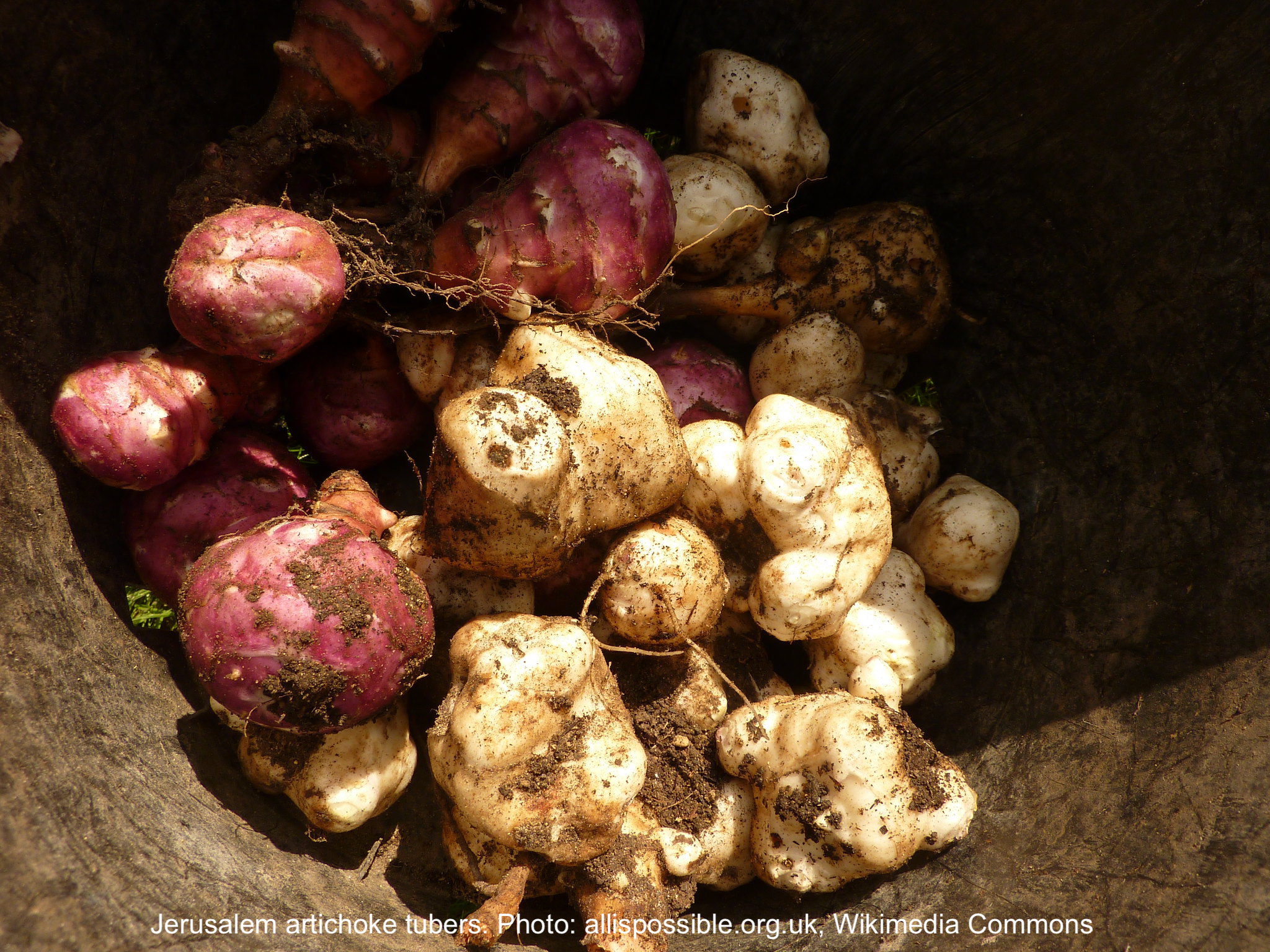 When French explorer Jacques Cartier stopped in the little Iroquoian village Stadacona during his second trip to the New World in 1535, on the site where Quebec City would later be established (1608), he saw vast fields of maize (corn), common beans and squash … which Cartier mistook for millet, broad beans and melons. (He was clearly not a farmer!) Two other plants were also grown: tobacco (Nicotiana rustica) and a sunflowerlike plant we now call Jerusalem artichoke (Helianthus tuberosus).

Jerusalem artichoke was widely grown by native peoples throughout Eastern North America. It was actually a companion of another French explorer, Samuel de Champlain, namely Marc Lescarbot, who in 1606, seeing the plant growing in Port Royal (Acadia), brought the plant back to Europe and tried to popularize it. Comparing its taste to that of the artichoke, he called it “truffe du Canada” (truffle of Canada) or even just “canada.”

The name by which we know it today—Jerusalem artichoke—is the result of a longstanding error. Why indeed would a plant from the New World be associated with Jerusalem, in the Old World? That’s because the plant was first successfully introduced to England from Italy where it was called “girasole,” the Italian word for sunflower, and indeed, it is closely related with to the common sunflower (Helianthus annuus). But to the English ear, “girasole” sounded like Jerusalem and it tasted like an artichoke, whence the name Jerusalem artichoke.

You may well see this plant marketed as “sunchoke” in supermarkets, a name given to it by organic farmer Frieda Caplan, in Vista, California back in 1965 when she was trying to promote the tuber as a healthy new food. In the past, it has also been known as the Canada potato or the French potato.

The Jerusalem artichoke produces tall stems (up to 7 feet/2.5 m tall!) with oval, pointed, dark green leaves that are rough to the touch. Yellow sunflowerlike blooms appear at the top of the plant in the fall… at least in most areas. Many late-blooming cultivars fail to bloom at all in short-season areas like mine. Where I live (Quebec City), the local Amerindian variety, unnamed as far as I know, has escaped to grow wild in many areas, yet never blooms at all. However, the lack of bloom doesn’t prevent the plant from producing tubers… and it’s the tubers that make the Jerusalem artichoke so interesting!

In the fall, the Jerusalem artichoke produces a profusion of swollen roots called tubers. They are roughly spindle-shaped: rounded or elongated, depending on the cultivar, but pointed at one end. They are often bumpy and irregular, hard to clean, although some selections have a smoother shape and are easier to prepare. They can have a yellow, brown or reddish skin, but all are white inside.

Unlike the potato, with which it is often compared, the Jerusalem artichoke has a sweet taste and a crunchy texture, a bit like a water chestnut. Also, unlike the potato, it contains no starch, but instead inulin, a carbohydrate based on fructose. Since type-2 diabetics tolerate fructose better than sucrose, Jerusalem artichoke tubers are said to be good choices for them. Inulin is also said to be excellent for our intestinal flora.

On the downside, you should consume the tubers in small quantities at first, until your intestinal flora adjusts to the new food; otherwise they can cause flatulence, leading to the Jerusalem artichoke’s other and less enthusiastic common name, fartichoke. Since the inulin in stored tubers is slowly converted into fructose over time, the tubers become more readily digestible the longer they are stored.

Although Samuel de Champlain himself promoted the “truffle of Canada” to the settlers of New France, they didn’t take the bait and failed to seriously adopt it. Nor did colonists in the colonies that would one day become the United States. They were deeply suspicious of this Amerindian plant. Their reasoning seems rather outrageous today, but essentially, they believed that if they ate like the “savages” (native peoples), they risked becoming savages. Hence their reluctance to accept Native America foods. Even corn, common beans, and squash took a certain time to become widely accepted and the Jerusalem artichoke simply never became a staple food in North America.

In France and elsewhere in Europe, on the other hand, it was accepted more rapidly and has long been grown on a large scale. During World War II, when the Germans commandeered essentially all the potatoes produced in mainland Europe, the Jerusalem artichoke saved millions of people from starvation… but for many of those who lived through the war, it remains a famine food, associated with horrible memories, and the older generation is reluctant to eat it. The younger generation doesn’t have that kind of constraint, and the Jerusalem artichoke is now easy to find and even relatively popular in Europe. All that remains to do is to reintroduce this North American vegetable to North Americans!

There is probably no other vegetable that is easier to grow in temperate climates than the Jerusalem artichoke. It can literally grow entirely on its own with no care whatsoever!

To get started, plant the tubers in spring or fall about 8 inches (20 cm) deep and about 3 feet (1 m) apart. Full sun or partial shade and well-drained soil, rich or poor, are fine. No maintenance is normally required, except perhaps the occasional watering if the summer is exceptionally dry. (Even if you don’t water, the plant will still survive, although the tubers will be smaller and less numerous.)

Sometimes a few leaves are chewed by insects or slugs, but this doesn’t seem to reduce the harvest. Rabbits don’t seem to like the leaves and although voles occasionally nibble on a tuber, this doesn’t really seem to impact the overall harvest. You may need to protect your plants from deer, though. As for diseases, sometimes the leaves suffer from powdery mildew in the fall, but this has no negative effect on the crop either. As for any weeds, the vigorous plant simply crowds them out.

However, a word of warning! The Jerusalem artichoke may be a vegetable, but it has no place in a vegetable garden. It’s a very invasive plant that will soon choke out other plants. This plant needs a space of its own, far from vegetable and flower beds, maybe surrounded by a lawn so the lawnmower can quickly eliminate stray stems.

Harvest the tubers in the fall, from late September through early December. Ideally, the stems should first undergo a few frosts, as cold weather improves the tubers’ taste. Or you can wait until spring and harvest them when the snow melts: the taste will be even better. In climates where the ground doesn’t freeze, simply consider the garden as a storeroom and dig the tubers as needed, anytime from fall to early spring!

Tubers harvested in the fall can be stored for several months in the refrigerator or cold room. Spring-harvested tubers, however, should be consumed without much delay, as they will soon start to sprout and then the tuber shrinks and becomes inedible.

Normally, a Jerusalem artichoke plantation will last a lifetime. As you harvest the tubers, you will normally miss a few smaller ones and it will quickly grow back from those, providing all the plants you’ll need for the upcoming season.

Where to Find Jerusalem Artichokes?

You won’t find seeds of this plant on the market, as it rarely produces seeds in culture. You’ll instead need to plant tubers. They’re found more and more often in garden centers in the spring and public markets and even supermarkets in the fall. And yes, you can successfully plant tubers bought from a food store in your garden

Some companies sell tubers by mail, shipping in the spring or in spring and fall. Do a quick web search and you should find plenty of sources! Don’t give up if you see the mention “sold out”, but rather try again later, as you’re probably just ordering in the off-season.

Jerusalem artichokes: the easiest vegetable. Try them and see what I mean!

9 comments on “The Jerusalem Artichoke: Is Any Vegetable Easier to Grow?”