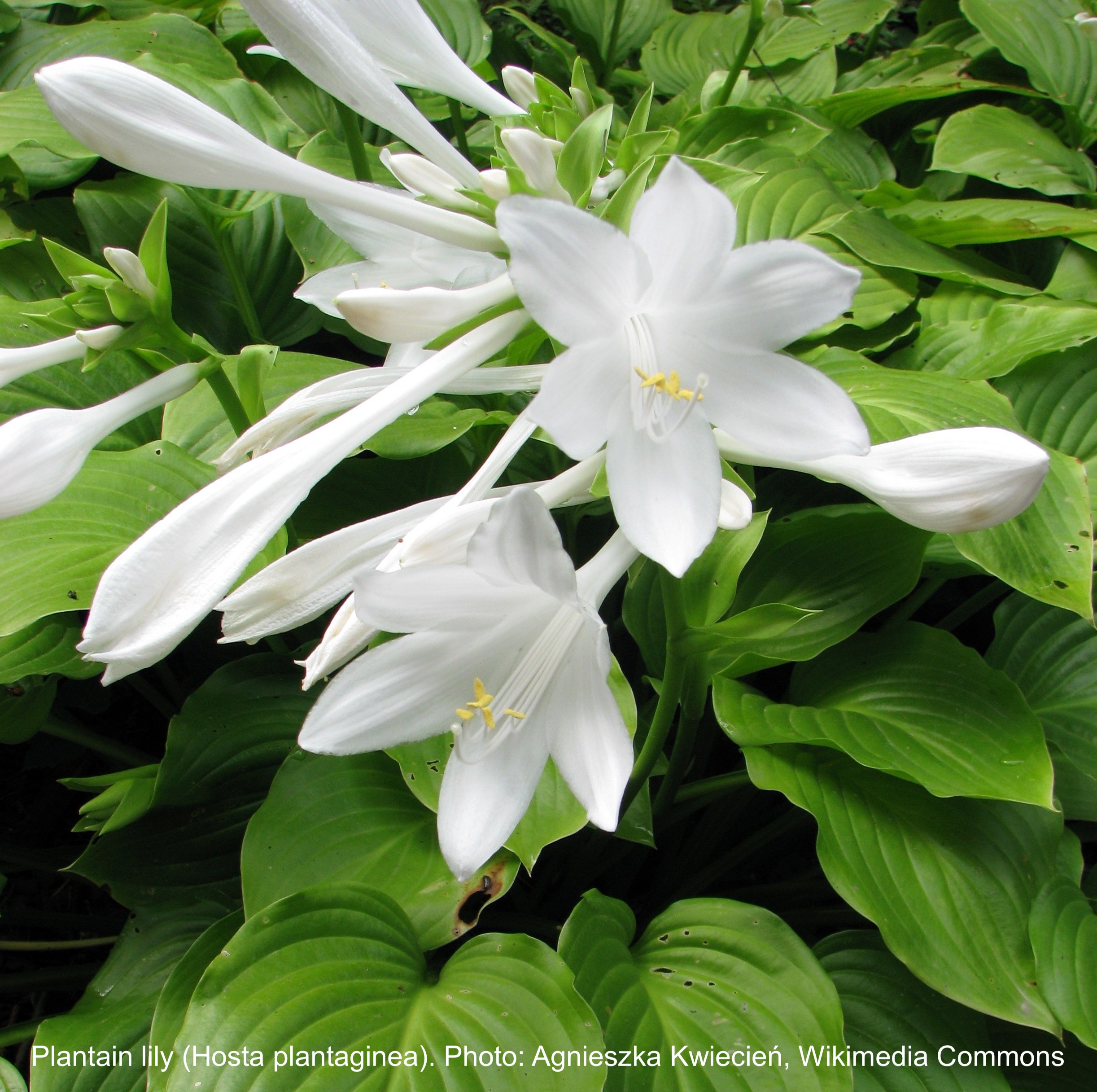 The first time I saw a plantain hosta (Hosta plantaginea) in Ladew Topiary Gardens some 35 years ago, I thought someone was playing a prank, that they had stuck stems of fragrant lilies in among a hosta’s foliage.

I never would have believed that a hosta could have flowers so big and so fragrant! The pure white trumpets measure 6 to nearly 7 inches (15 to 17 cm) in length and their intense orange-blossom scent will seduce you from quite a distance. And it’s the only one among the some 60 species of hostas with noticeably fragrant flower. As a result, botanists first classified this plant as a daylily (Hemerocallis). Even they couldn’t believe this plant was a hosta!

There are now many scented hostas in gardens, cultivars like ‘Royal Standard’ and ‘Fragrant Bouquet’, but if you trace their history, you’ll discover all are either mutations of H. plantaginea or hybrids with it as at least a distant parent.

H. plantaginea forms a dome of shiny, medium green, shiny, deeply veined leaves about 2 feet (60 cm) in diameter on a plant some 18 inches (45 cm) high. The leaves are quite similar to plantain (Plantago major) leaves, although larger, which is where the plant gets both its common name (plantain hosta) and botanical name (Hosta plantaginea). The flower stalk is about 30 inches (75 cm) high.

Plantain hosta is the latest of all the hostas to bloom, starting in August or early September, and the flowers bloom successively for nearly a month. In many areas, its late-blooming habit has given it the nickname August lily. (Note the word lily: I’m obviously not the only person to see the resemblance!) Flowers open late in the day as well, at the end of the afternoon, then stay open all night and into the morning. It’s definitely worthwhile placing this hosta in spot you frequent in the evening!

H. plantaginea is the most southerly species of hosta, found in mild climates in China, and although very hardy (USDA zone 3, AgCan zone 4), it has certain habits that are different from the typical hosta most gardeners know.

The most obvious difference is that it produces new leaves in flushes throughout the summer, not only all at once in the spring like other hostas. Therefore any damaged or tired leaves are eventually covered up by fresh new ones. That also means it can hide hail damage and even deer damage … assuming you can keep the deer away when the new leaves come in!

Also, it sprouts earlier in the spring than other hostas, which can put it at risk of frost damage in areas where the snow melts quickly. If you cover its root zone with good thick mulch about 3 to 4 inches (7–10 cm) thick, that will keep the ground cooler in the spring, thus delaying its growth and keeping it safer from frost. But if it does get frosted … well, at least it will soon produce fresh leaves to hide the damage, unlike other hostas whose frost-damaged leaves remain visible all summer unless you clip them off.

Finally, unlike other hostas, the plantain hosta prefers sun or only part shade. It will tolerate full shade, but won’t bloom as well there.

Otherwise, H. plantaginea is a classic hosta that will tolerate almost any kind of soil as long as it is well drained. Like most hostas, it will do best in rich, cool, somewhat moist soil. Do think to water it during periods of drought, especially while it is in bloom.

As with most hostas, it’s best multiplied by division in spring or fall. It rarely produces fertile seed in cooler climates, but where it does, you can grow new plants from seed as well.

Although H. plantataginea rarely suffers from that bane of hosta growers, slugs, deer love it, more than other hostas in fact! If you have deer, this is not the hosta for you.

One Cultivar to Avoid

Most cultivars and hybrids of H. plantaginea are excellent garden plants and many in fact are very popular. That includes ‘Fragrant Bouquet’, ‘Guacamole’, ‘Stained Glass’ and ‘Invincible’.

One cultivar I don’t recommend, however, is H. plantaginea ‘Aphrodite’ (‘Venus’). This is a double-flowered mutation of the species with flowers just as big and as fragrant and in fact, extremely beautiful, so it seems like an excellent choice on paper. Unfortunately, the extra weight of the double flowers means they tend hang down so you can barely even see they are double. Worse yet, often the entire flower stalk simply flops to the ground, especially if it rains. This is a rare example of a plant where the species is more interesting to gardeners than its selection.

Where to Find a Plantain Hosta

This is one hosta more often found in people’s gardens than in garden centers, so if you don’t have it, trying begging a friend or neighbor for a slip! If you can’t find a free division, you ought to be able to find it in a larger nursery. If not, it is readily available by mail order.

The plantain hosta: much more than just a hosta!

Text based on an article originally published in this blog on September 9, 2015.

6 comments on “The Plantain Hosta: More Like a Lily Than a Hosta!”