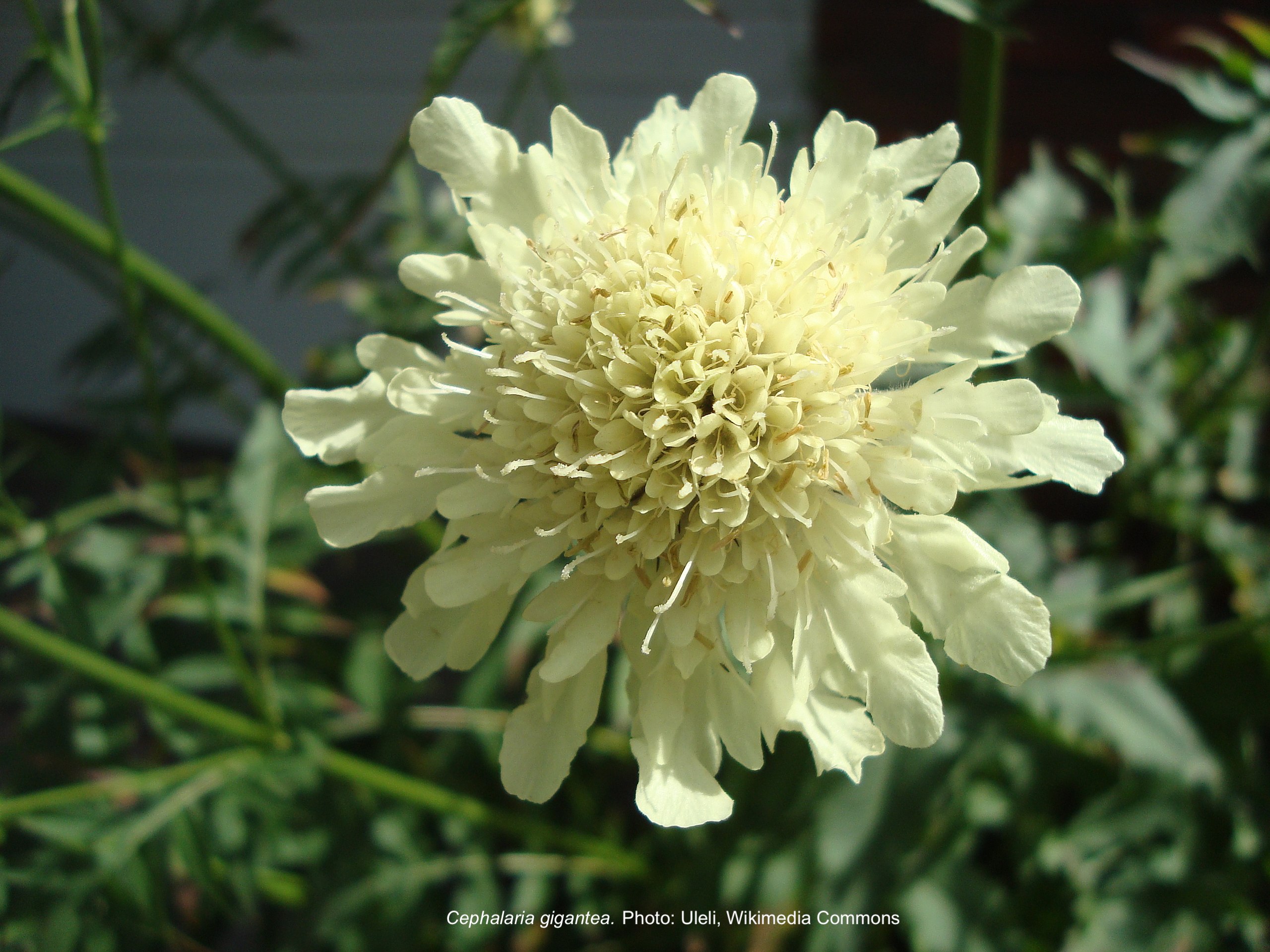 Question: I’ve been growing a beautiful perennial for several years, one that I grew from seeds picked up in a friend’s garden. She didn’t know what it was, but it has been in her garden for over 40 years. At first, I just grew it and enjoyed it, but I’ve become more particular about my garden plants over time and now like to put a name on them. The problem is, nobody I’ve asked recognizes it. The flower is very similar to that of a scabious. Do you know what its name is?

Answer: Yes, I do. In fact, I grow it myself. This perennial, Cephalaria gigantea, often goes under the names giant cephalaria or giant pincushion flower. It’s a very tall plant (5 feet to 8 feet/1.5 m to 2.5 m high) with very pale yellow flowers, almost cream coloured. And indeed, it does look a lot like the closely related scabious (Scabiosa), so much so that it is sometimes called yellow scabious or giant scabious. Both are in the honeysuckle family (Caprifoliaceae).

It’s a traditional cottage garden perennial, but has become fairly rare these days and is not often mentioned in books or magazine articles. That it was once more widely grown in the past is seen in that fact that it is often found in old gardens and even abandoned ones where it seems to hang on in spite of decades of neglect. Despite its rarity on the market, it’s very pretty, long-flowering plant that needs no care whatsoever, one that lovers of perennial borders would certainly find of great interest. Hopefully, this article will give it a bit of a boost in publicity.

The genus Cephalaria includes some 65 annual and perennial species, mostly Eurasian, usually with pale yellow, white or lavender flowers, but giant cephalaria, native to the Caucasus and Turkey, is one of the rare species cultivated. It forms a low-growing rosette of fairly large bipinnate leaves, dark green above and downy underneath. They’re actually quite attractive … but unfortunately you rarely see them since this very large plant is almost always cultivated in the back of perennial borders where the foliage, rarely more than 2 feet (60 cm) high, is usually well hidden by other plants.

The flowers, however, are very visible: carried on tall, thin, branching stems bearing only few tiny leaves, they are a charming primrose yellow. Like its more popular cousin, the scabiosa or pincushion flower (Scabiosa), its inflorescences are composed of a domed central disc with prominent stamens, giving a pincushion effect, surrounded by several rows of flattened bracts of the same color.

The flowers are plentiful and borne in succession for eight weeks or more, from June to August, but they are so well spaced and on stems so thin that they create more of a see-through curtain than a wall. And it’s not because they’re small: at 3 inches (6.5 cm) in diameter, they’re actually quite large. Overall, the giant cephalaria is extremely pleasing to the eye … but its airy appearance makes it very difficult to photograph!

Even after flowering, the seed capsules maintain somewhat attractive, like a green button that slowly turns brown.

The giant cephalaria makes an excellent cut flower sometimes found in florists’ bouquets, and bees and butterflies love it.

Giant cephalaria an easy-to-grow perennial; a good plant for beginners. Almost any soil will do, but since drought causes the leaves tend to turn brown around the edges or even die back, throwing the plant into summer dormancy, it’s best to plant it in fairly moist soil or, at the very least, use a mulch to keep the soil cooler and moister. It does best in full sun, as the flower stalks can become weak and floppy if you grow it in too much shade.

In serious gardening circles, especially among aficionados of English cottage-style gardens where it best known, giant cephalaria has the reputation of being a workhorse of a plant, able to put up with just about any neglect. It’s adapted to USDA hardiness zones 2 to 8 (AgCan zones 3 to 8) and it rarely seems to be bothered by insects and diseases. Even herbivorous mammals (deer, rabbits, groundhogs, etc.) tend to ignore it.

Some people deadhead this plant in the hopes of stimulating rebloom, but I’ve never heard of that actually working. However, if you’re deadheading it to stop it from self-sowing, that would make sense. I like to let it self-sow, though: it only seems to do so modestly and it gives me gift plants and backup plants.

You can, obviously, cut it to the ground in the fall if you want, but I leave mine standing to feed the birds, as they like harvesting its seeds. By spring, the old stems and leaves will have pretty much collapsed and you can just let them decompose on the spot if it’s in the back of the garden. Or you can clean up if that’s you’re into sort of thing.

Giant cephalaria is usually multiplied by seeds and they germinate in three to four weeks without special treatment, whether sown indoors or out. If you’re having a hard time getting germination (especially likely if the seed isn’t fresh), however, do give them a few weeks of cold stratification beforehand.

Theoretically, you could divide a giant cephalaria, but that’s not easy to carry out, because the roots are very deep and difficult to extract. Transplanting mature plants is problematic for the same reason. Young plants, on the other hand, are easy to move. So, if you find a plant that has germinated in the wrong place, just dig it up and move it.

Finally, you can also propagate this plant by root cuttings.

Where to Find One

That’s not so simple. This is not your run-of-the-mill perennial and unless you have a nearby nursery specializing in cottage-garden perennials or old-fashioned plants, you won’t likely to be able to find this plant locally.

There are several nurseries that offer plants by mail order in the US (Digging Dog Nursery, Annie’s Annuals and others) and many, many more in the United Kingdom (Claire Austin Hardy Plants and Bluebell Arboretum and Nursery are two examples). I don’t know of any mail order nurseries in Canada that offer it, but if you’re aware of one, don’t hesitate add that information to Leave a reply below.

And that brings us to buying seeds, which is certainly the cheapest way to go. Among the seed sources are Plant World Seeds, Seedaholic and Jelitto Perennial Seeds. I ordered the seeds of my original plants from the British seed house Chiltern Seeds, but they are not, as I write this, shipping outside of the United Kingdom because of Brexit complications.

The giant cephalaria is really a truly interesting perennial. Try it and see!

3 comments on “A Mystery Perennial”