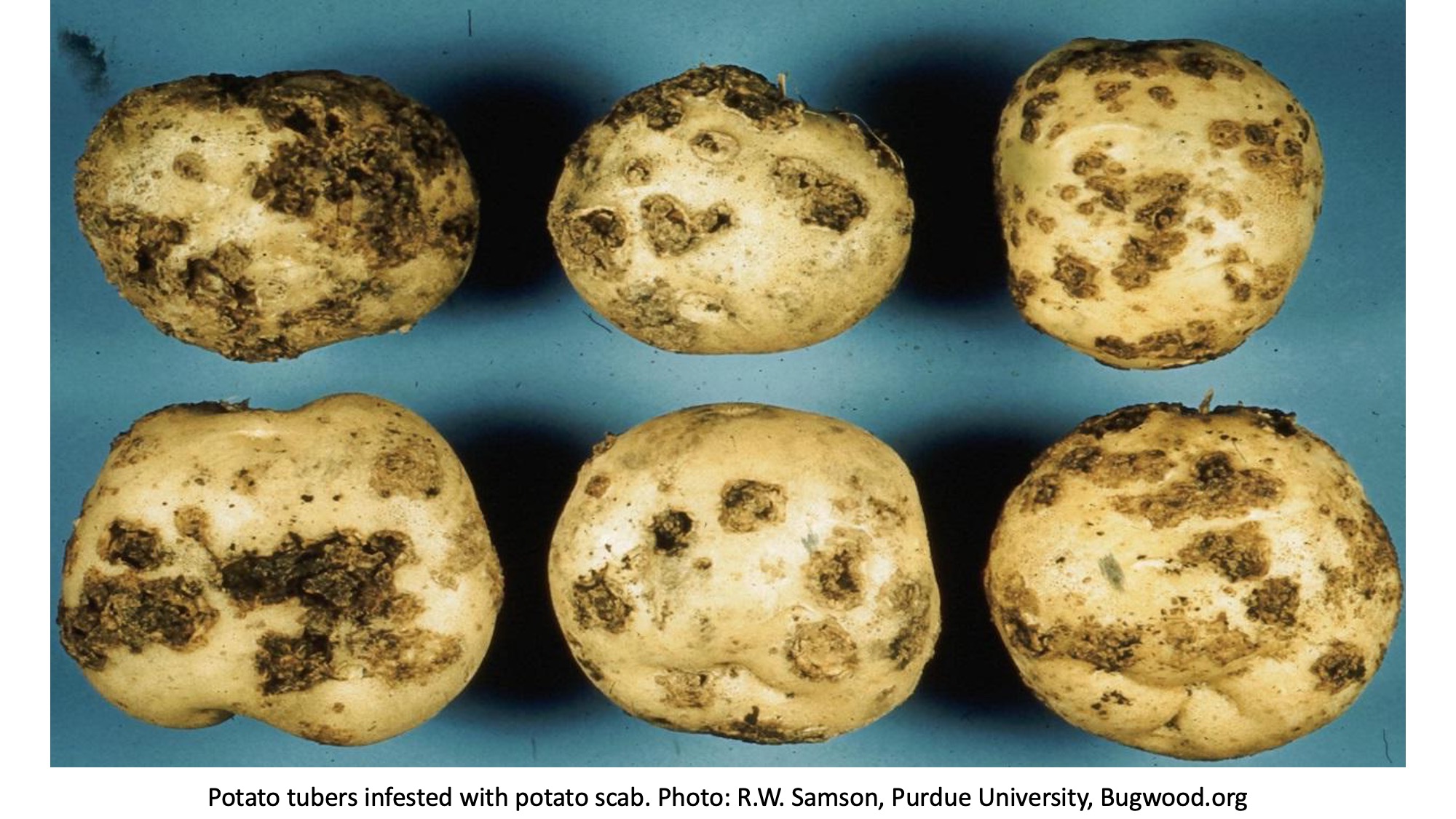 Question: I grew three bags of potatoes this year and two-thirds have been attacked by scab. It’s anything but appetizing. Would they be edible if I peeled them? And will the soil they grew in be good for next year? And if so, for vegetable plants or just for flowers? I grow organically and it is important to me to know: I don’t want to throw out my potatoes and, even less, the soil.

Answer: You certainly won’t have to throw away the soil and probably not the potatoes either. At least, not most of them.

Potato scab, also called common scab, is a bacterial disease that causes irregularly shaped, brown, corky lesions on potato tubers. They usually measure 3/16 to 3/8 inches (5 to 10 mm) in diameter. There may only a few scabs per tuber … or most of the tuber may be covered in them.

Scabs do not render potatoes inedible: you can remove them by peeling the tuber and what remains will be perfectly edible. Note that peeling works well when the scabs are mostly superficial, but sometimes they form a pit extending well into the tuber, either that or insects or diseases penetrate secondarily, reducing the amount of usable potato flesh you can harvest.

Do note that the disease stops developing after harvest, so you can still store the tubers. On the other hand, a scabby tuber has no commercial value: buyers, even potato chip producers, want perfect potatoes!

The bacteria in question (several different species of Streptomyces) live in the soil and can persist for several years after the original infestation. In home gardens, common scab usually only seriously affects potatoes. Some strains do sometimes slightly infest other root vegetables, such as carrots and turnips, but generally not enough to hinder harvesting.

In sum, you can still grow whatever you want in your potato bed—flowers, other vegetables, herbs, small fruits, etc.—, but will need to avoid potatoes for a while.

The main treatment for potato scab in the home garden is crop rotation: wait at least 4 years before growing potatoes again at that location. You should also avoid root vegetables: although they may not show clear symptoms of the disease, they can help nourish the bacteria and keep you from breaking the cycle.

When you do return to growing potatoes, only plant tubers that are certified disease free.

Also, if possible, chose a variety known to be resistant to scab, such as ‘Avon’, ‘Gold Rush’, ‘Hilite Russet’, ‘Huron’, ‘Netted Gem’, ‘Norland’, ‘Péribonka’, ‘Pike’, ‘Russet Burbank’, ‘Superior’ or ‘Viking’. Be especially wary of any tubers that have remained in the garden all winter: they are often a source of infection.

You might want to consider acidifying the soil (lowering its pH). Most scab bacteria do little damage in acidic soils and so using garden sulfur or ferrous sulfate to bring the pH down to less than 6, in fact, even as low as 5, may help in the future. And avoid liming beds where you intend to grow potatoes: it makes the soil more alkaline and therefore tends to increase damage.

Also, don’t add fresh compost or manure to the soil in the spring when planting tubers, as these two products help feed the bacteria.

Finally, the soil should also not remain constantly wet during the growing season or nor should it be allowed to dry out completely until the plant becomes drought-stressed. Instead, let the soil dry out just a bit before watering thoroughly. Unfortunately, in spite of your best efforts, a summer of heavy rain may stimulate a resurgence of the disease.

Some soils seems especially susceptible to potato scab, while other gardeners can grow potatoes for decades and never see a sign of it. But since you’ve had a problem, you can expect that it may well return some day.

2 comments on “What to Do About Scabby Potatoes?”