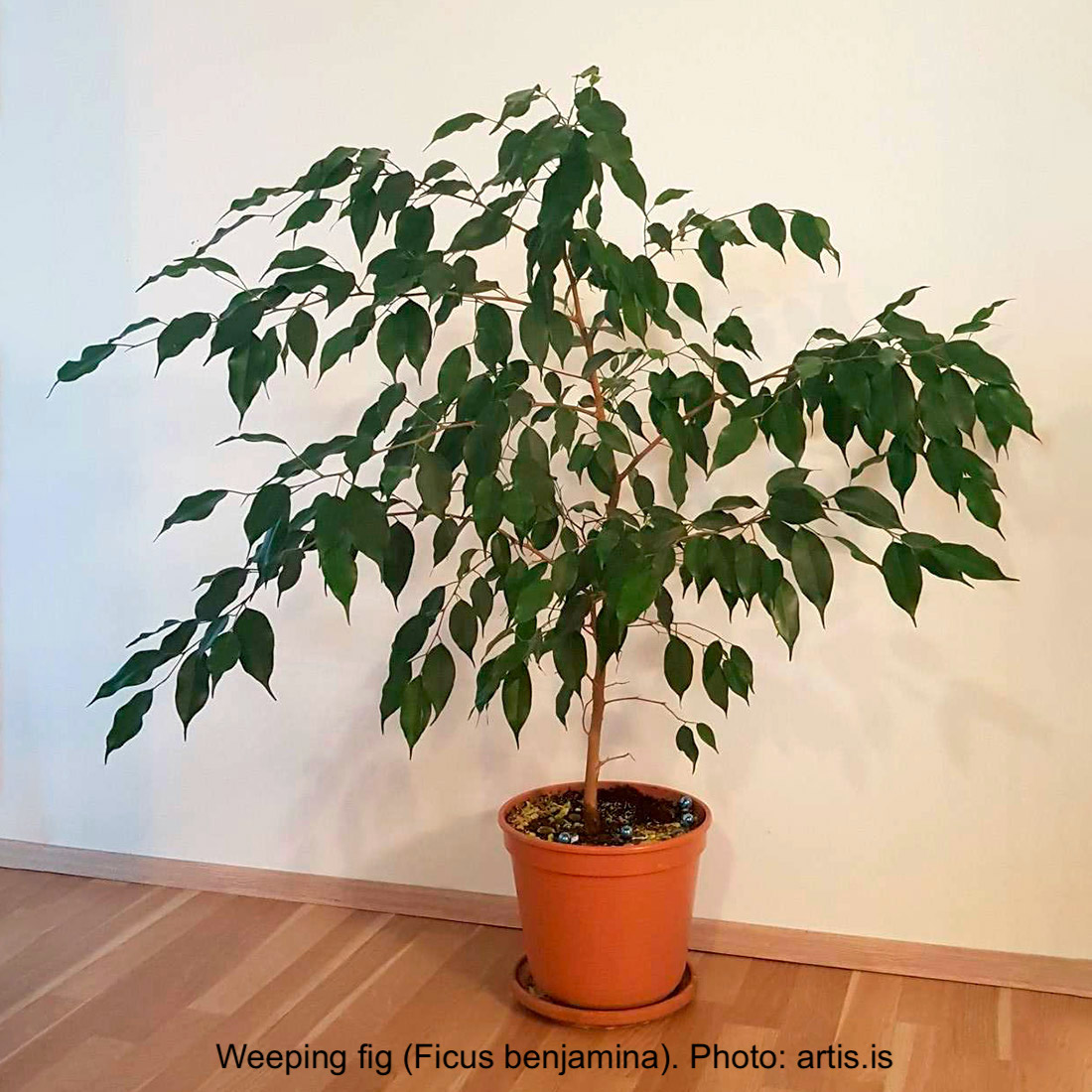 This popular houseplant usually comes in the form of a tree with a sometimes braided or spiral trunk and long, arching branches that hang down somewhat at the tips, hence the nickname “weeping fig.” It has countless dark green oval leaves, each with a very pointed tip. And sometimes it produces a few small round green berries that turn orange.

In its native lands in tropical Asia and Oceania and in gardens in tropical climates, the weeping fig is a huge tree up to 100 feet (30 m) in height. In shopping centers, you also see specimens of quite a large size, maybe 15 to 20 feet (5 or 6 m), but it’s necessarily smaller in our homes: rarely more than 10 feet (3 m). Who’d have room for anything bigger? But since a weeping fig will grow all its life, you may eventually have to prune yours, because otherwise it will one day reach the ceiling.

But There’s a Problem

The weeping fig is nearly the perfect indoor tree! It has a beautiful silhouette, a phenomenal capacity to filter the air of pollutants and the capacity to adapt to typical indoor conditions. What more could you ask for?

Well, there is one thing: that it not drop its leaves. Because it tends to lose them. Not just a few, but dozens, hundreds, often nearly all of them. This inevitably occurs after you move it. And it can lose so many leaves it may die. What is so particularly discouraging is that this all happens within just a few weeks after you buy it and bring it home.

It’s so disheartening … and yet so easily preventable. You just have to know what to do.

When you see it in the garden center, it has usually freshly arrived from a nursery in the tropics where it grew outdoors in full sun. As long it stays in the greenhouse, though, it doesn’t react too much because the light there is still very intense and the atmospheric humidity is excellent: close of the conditions it had been receiving.

But when transferred to a typical living room, where the air is dry (in the average house, the atmospheric humidity is shockingly low, rarely exceeding 40% whereas the fig would prefer 70%) and the light is abysmal (oddly enough, people seem always to think that their home is very well lit, yet a luxmeter will almost always indicate that light is “low” to “very low”), the poor plant quickly goes into a state of shock and the leaves start to drop off one by one if not a dozen at a time.

So Easy to Fix

To acclimatize a weeping fig tree, water it lightly, then slip it inside in a large clear plastic bag (a dry-cleaning bag or a large clear trash bag will be needed for large specimens) as soon as you bring it home. Then seal the bag.

No, the plant will not suffocate inside a sealed bag. Plants are constantly recycling the air around them and produce their own carbon dioxide and oxygen, therefore all the air they need. Besides, as long as the plant is sealed inside its bag, it won’t lose water to evapotranspiration and won’t need watering either.

Inside this temporary greenhouse, the air is going to be extremely humid. This allows the plant’s stomata (pores through which it breathes) to open fully and therefore for photosynthesis to carry on at full speed. It’s like balm on a wound for the plant, giving it just what it needs to recover as the leaves adapt to the necessarily lower light. Do place the fig tree in a well-lit location at first, although without direct sunlight (otherwise it will cook inside its large, sealed bag).

After two weeks under high humidity and good light, try moving the plant to its final home, the place where you want it to grow, which is probably shadier.

Wait another two weeks, during which time, thanks to the high humidity, the fig tree will acclimatize to the new light level, even if that light is quite low … and will do so without losing any leaves.

When it’s well acclimatized, it’s time to start getting it used to the open air again.

Because the air in your home is much drier than the very humid air that the fig tree has become accustomed to during its time in its personal greenhouse, you’ll need to acclimatize it to the change gradually. Each morning, poke a hole or two in the bag with a pencil or pen. Over time, the bag will be more and more perforated, the humidity will drop bit by bit and the plant will become more and more acclimatized to dry air. When the bag is in tatters, your fig tree will be well adapted, and you can remove what is left of the bag.

Success! And it really wasn’t that hard to do!

Subsequently, maintaining a weeping fig is easy: water thoroughly when the soil is dry to the touch, offer normal indoor temperatures and fertilize two or three times per year with the fertilizer of your choice (it will adapt perfectly to any fertilizer) during the spring to summer growing season. That’s all!

Thus treated, a weeping fig tree can live 40 years or more in perfect health … but if you change its conditions, even if it is only to transfer it to another room in the same house, place it back inside a clear plastic bag and start acclimatizing it all over again.

After all, what can you expect? The weeping fig tree will adapt to almost anything … but only as long as the changes come on gradually. It just doesn’t like sudden change!

The Same Goes for Crotons

Another houseplant that reacts the same way after you bring it home from the store—that is, with massive leaf loss often followed by death—is the croton (Codiaeum variegatum), an indoor shrub or tree with multi-colored leaves. It requires exactly the same treatment: a “greenhouse stay” of a few months under high humidity (being sealed inside a clear plastic bag) to allow it to acclimatize.

Adapting a weeping fig to your indoor growing conditions is no more complicated than that!