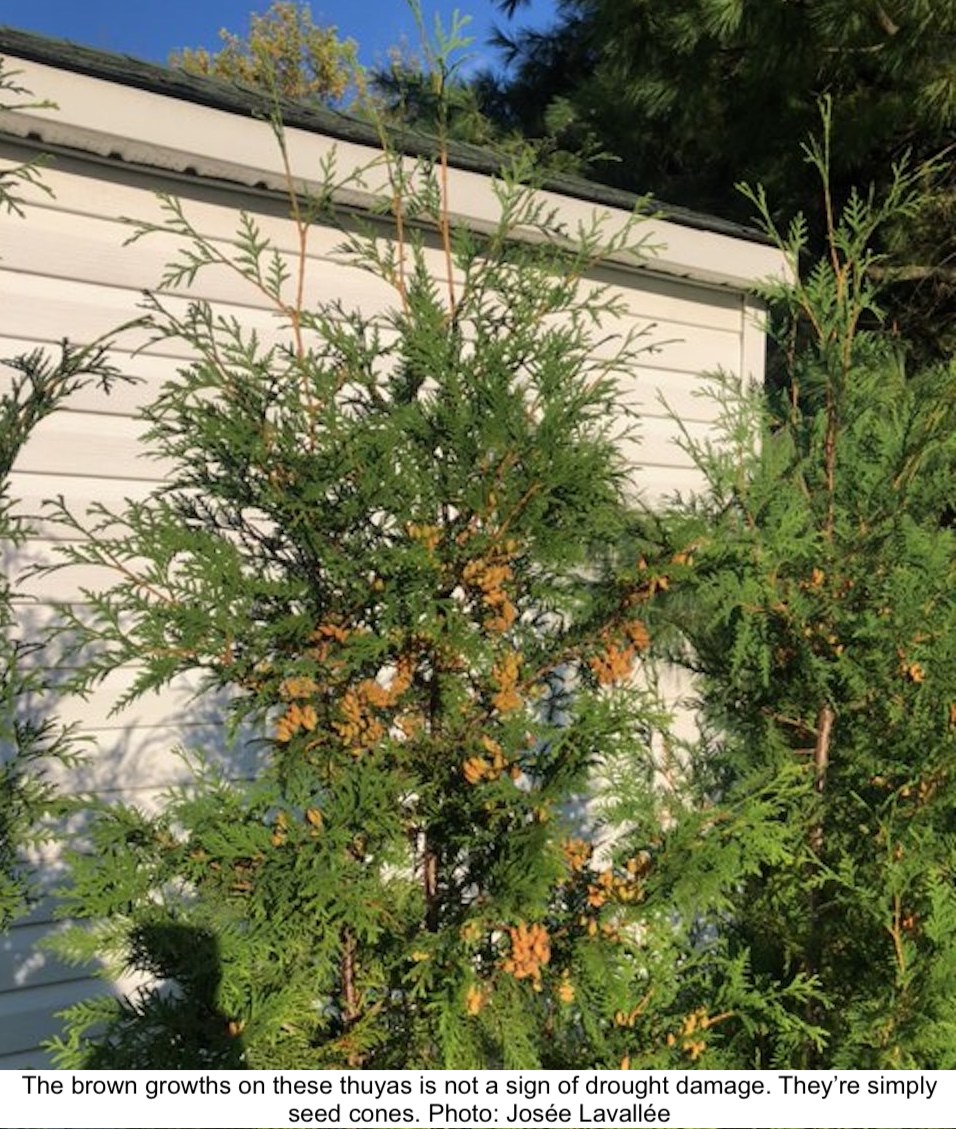 Question: I had a cedar hedge installed in June 2020 and the plants all passed the winter without any damage. However, the summer was very dry in our region and we had to water less than usual due to the watering restrictions that the city imposed.

Our cedars made beautiful young green shoots over the summer, but now they are drying out and dying. Am I going to lose them? I’m including a photo so you can see.

Answer: No, you’re not going to lose your “cedars” (Thuja occidentalis), better called arborvitaes or thuyas. In fact, they are perfectly healthy.

What you see are not dead stems due to drought damage, but simply cones. They may not look much like the pine cones you may be more used to, given their much smaller size (only 0.3 to 0.5 in/8 to 13 mm in length), but they serve the same purpose: cones produce the seeds that will give birth to the upcoming generation. After all, thuyas are conifers and the word conifer means cone-bearing.

The cones will turn fully brown when they reach maturity later this fall, then split open to release their seeds. They’ll hang on over the winter, but will eventually drop off, their job done.

Also, you probably won’t be seeing this phenomenon next year, as thuyas usually only produce cones every 2 to 5 years.

If you really do want to prevent cones from forming in future years, study the plants in the spring (April to June, depending on the region). In years in which you see pinkish tips appear on the branches (these are female flowers), when you prune your hedge, got at it a bit more heavily than usual and remove them. Obviously, if you prune off the female flowers, there will be no cones that year.

That said, I suggest learning to see cone formation on thuyas as an added if minor attraction rather than a problem and just letting nature run its course. After all, thuya cones are an important source of food for many birds and animals, including chickadees, grosbeaks, pine siskins, nuthatches and red squirrels. Wouldn’t you want to invite them to your garden?

Live and let live: an excellent motto for laidback gardeners!