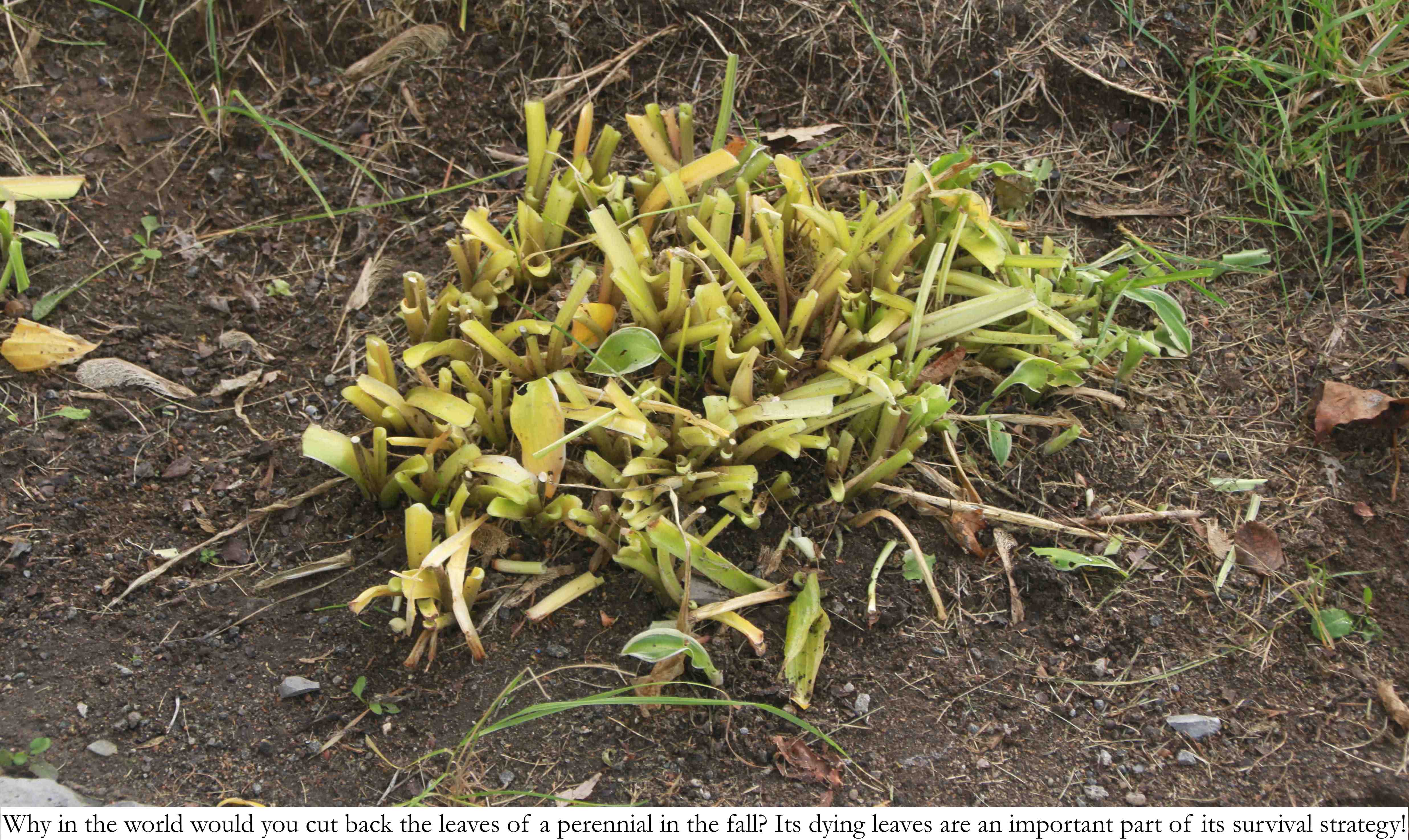 The idea of “cleaning up” your perennials in the fall should have died out decades ago. It’s never been necessary and in fact the tradition of cutting perennials to the ground in late autumn is even harmful. You’ll find that perennials grow better if you simply leave them alone in the fall.

Because, on one side, the dead and dying leaves help protect the plant not only from the cold, but especially from freezing and thawing (usually much more deadly than cold itself). Dead leaves are a natural insulator.

But also, remember a detail that can’t be emphasized enough: the best fertilizer for any plant is its own foliage. Its leaves contain exactly the minerals the plant needs to grow and bloom well. So, Mother Nature devised a wonderful system whereby the old leaves die, but decompose on the spot to feed the plant the following year. Millions of years went into developing this self-sustaining system … yet so many gardeners still think they know better than Mother Nature and cut the leaves off.

Cut off the plant’s leaves and you’ll have to replace the minerals lost with expensive fertilizer!

Think of it this way: if you remove the plant’s dying leaves, you’ve made the soil the plant grows in poorer, so you’ll have to replace the missing minerals with fertilizer next spring. So, you just added two useless activities to your list of things to do in the garden (cut off perennial leaves in the fall, apply fertilizer in the spring) and, worse yet, you have to pay for the fertilizer!

Of course, there are gardeners who will say they cut the leaves off in the fall so they won’t have to do so in the spring, insisting that it is more pleasant to pick up relatively dry leaves (in the fall) than leaves soaked by a long winter under the snow (in the spring) … but that’s a sign that they still don’t understand Mother Nature.

The leaves of perennials decompose during the winter. They are not there in spring or, if still present, are in a state of decomposition so advanced that if you let them continue, in most cases, there will literally be nothing left before summer even begins.

All that’s left to “clean up” in the spring (and only on some perennials) are the dead flower stalks. They have, in many cases, been feeding the local bird population over the winter, but that role is over by spring. So, when the snow melts, if these stems are still standing and if they bother you, simply snap them off at the base and place them on the ground at the base of the mother plant. That way they will continue their role of feeding momma and will decompose in their turn over the summer.

Moreover, often beneficial insects overwinter in and on the dead leaves and hollow stems of your perennials. If you remove them in the fall, it’s like welcoming undesirable insects into your garden. Let the leaves and stems decompose on the spot and the beneficial insects will already present when the bad bugs awaken.

In conclusion, the fall cleanup of perennials is a waste of time and it is even harmful. So why bother? Instead, take a laidback attitude and let Ma Nature do her thing!