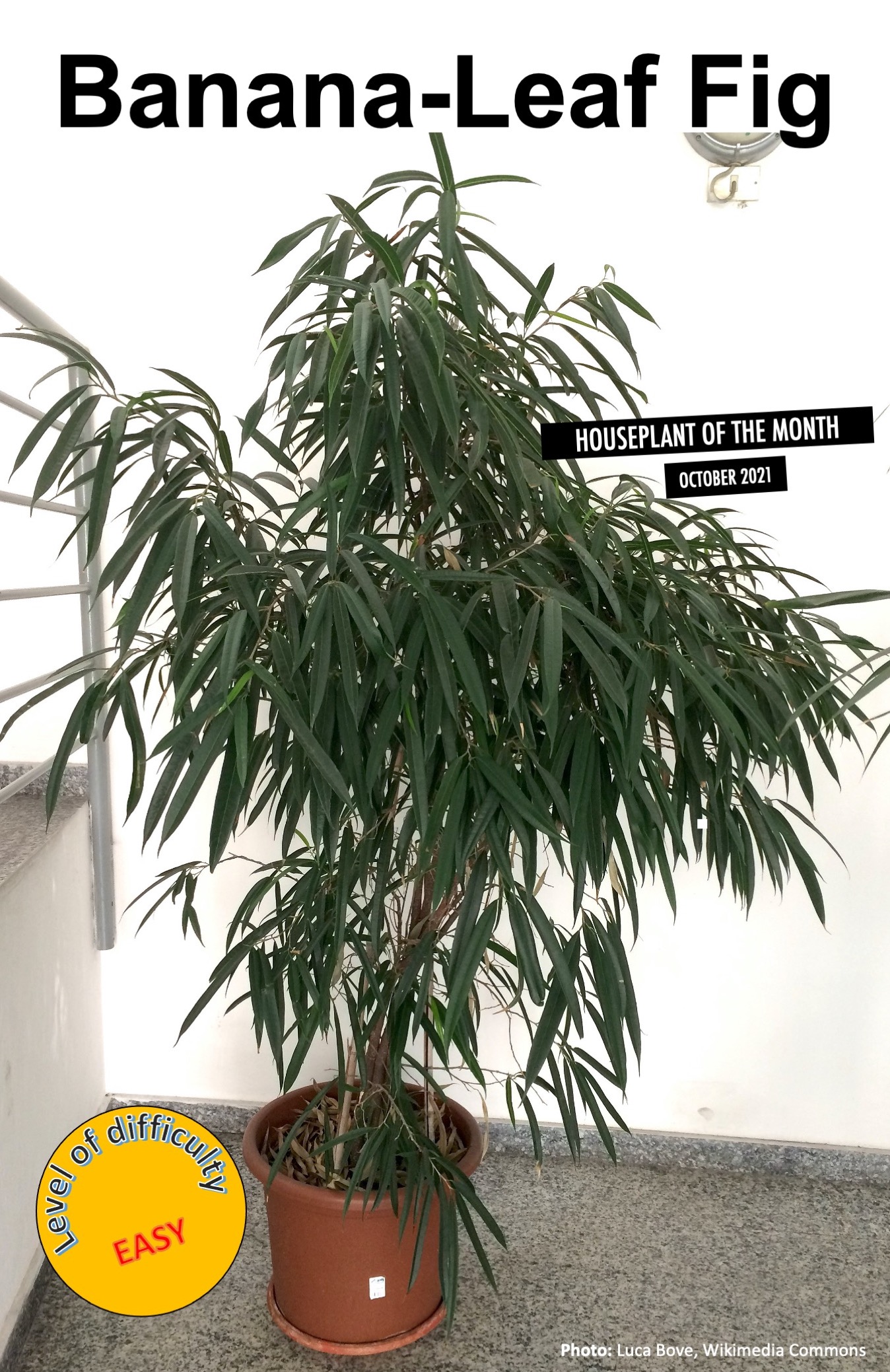 The banana-leaf fig or sabre-leaf fig (Ficus maclellandii) is an indoor tree. You might also know it as Alii fig, Alii being the cultivar name of a Hawaiian selection (F. maclellandii ‘Alii’), by far the most commonly available clone. (Alii means “chief” in Hawaiian.) Or you may know it as F. binnendijkii or F. longifolia, two illegitimate names. The name F. binnendijkii is still commonly used in Europe.

I first wrote about this plant way back in 1990, featuring it in on the cover of my magazine, Houseplant Forum. It was a fairly new introduction at the time and seemed very promising, but has since remained stuck on the cusp of popularity. Even to this day it is better known to interior designers than houseplant hobbyists. It’s widely available, but still largely passed over in favor of its much finickier cousin, the weeping fig (Ficus benjamina). Too bad!

In its native range, tropical southeast Asia, from Assam and Yunnan, China south to peninsular Malaysia, it’s a tall tree of the tropical rainforest, reaching up to 65 feet (20 m) in height.

It’s actually a strangler fig, one of many fig species with that habit. It’s what is known as a hemiepiphyte: a plant that starts its life as an epiphyte, then becomes a terrestrial plant. Its sticky seeds are dropped onto tree branches or trunks by fruit-eating birds and animals and the seeds germinate and start to grow there. The young sprout sends roots down, often wrapping around the host tree. When they reach the ground, the roots thicken, graft together and become a trunk even as the upper part reaches up into the sunlight for more energy. Over time, the fig then often strangles its host and takes its place.

Don’t worry, though, no strangling will be going on in your living room!

Ficus is, of course, is the genus name for all figs, while the species name maclellandii honors John MacLelland, a British medical doctor and plant collector (1805–1883).

When grown as an indoor plant, your banana-leaf fig is very unlikely to reach 65 feet (20 m) hight. More like 7 to 10 feet (3 to 4 m) over many years. It can easily be kept much smaller by underpotting and pruning. Some people even grow it as a bonsai!

The young plant has a fairly narrow upright trunk, although certainly sturdy enough to support its weight. The bark is medium brown at first with numerous white lenticels (breathing pores), turning a more even beige as it matures. It is often sold with a twisted or braided trunk, as is often seen with the weeping fig (Ficus benjamina). Under high humidity, it may grow aerial roots that reach to the soil and form additional trunks, but that rarely happens under average home humidity.

The banana-leaf fig branches readily, naturally taking on an upright shrubby appearance in its youth, but when you buy it, the lower branches have often already been pruned off to accentuate its treelike silhouette. These lollipot-like specimens are called “standards” in the houseplant industry.

Of course, the main attraction of the banana-leaf fig is its unusual leaves: leathery, pointed, long (to 5 inches/13 cm) and narrow in diameter, yet fairly thick, they grow from narrow buds at the stem tip and bend down, giving tree an oriental appearance, somewhat like bamboo. ‘Alii’ has the narrowest leaves, less than 1 inch (2.5 cm) in diameter. Another popular clone, ‘Amstel King’, has broader ones, up to nearly 2 inches (4.5 cm).

Tiny green berries sometimes form at leaf axils, especially under greenhouse conditions, but can’t mature since the flowers inside can only be pollinated by a very specific tiny wasp not found outside of the plant’s native range … and pollination is a must, as male and female flowers are borne on separate trees. The berries, never having been fecundated, therefore soon stop growing, then drop off.

Besides ‘Alii’ (narrow leaf) and ‘Amstel King’ (broader leaf), there are a few variegated cultivars that are occasionally seen, such as ‘Alii Variegated’ and ‘Amstel Gold’: both chartreuse with darker green marbling.

Caring for a Banana-Leaf Fig

The main selling point for this houseplant tree has always been its tough-as-nails nature. It will grow almost anywhere and is not given to dropping its leaves when it is unhappy, always a problem with weeping fig (to read more on that, go to Bring Home a Weeping Fig Without Losing a Leaf).

It is probably the easiest of all the indoor trees to grow, at least among those that actually look like trees, that is, with a trunk and many branches! And it’s very hard to kill.

Light: Bright to medium light with at least a few hours of sun per day will work perfectly. However, it’s very tolerant of low light, so a good choice for that dark corner. Just don’t expect it to grow as densely nor as quickly there.

It does perfectly well under artificial light as well, usually fluorescent or LED lights.

Give it the classic quarter turn with each watering to ensure equal growth in all directions.

It will adore a summer spent outdoors. Just acclimatize it first over a week or so, in shade, then partial shade, then sun (if you wish: it doesn’t really need full sun).

Watering: This plant will put up with some neglect, so if you delay watering a bit, it probably won’t be damaged. However, that’s not ideal. Normally, just follow the golden rule of watering: water deeply, enough to moisten the entire root ball, then allow the soil to dry before watering again.

The finger test is the best way to tell when it needs water (stick your finger in the potting mix: if it feels dry, water; if it doesn’t, don’t), but you can also learn to judge watering needs by lifting the pot to test its weight: if it feels lighter, it’s time to water. Or you can use a moisture meter.

Humidity: This is a jungle plant, so it stands to reason that it will do best under high humidity, but it is surprisingly tolerant of dry air. Still, if you can keep the relative humidity above 40%, that will help it grow with more vigor.

Fertilizer: This is not a greedy plant and will do alright if you never fertilize it. However, it will do better if you apply fertilizer at a quarter of the recommended rate during spring and summer. (Fertilize at whatever frequency the manufacturer suggests, just with 4 times less fertilizer.) And any fertilizer will do: houseplant fertilizer, cactus fertilizer, lawn fertilizer: it really doesn’t care.

Even outdoors, you won’t find banana-leaf fig being grown with success outside of the tropics (hardiness zones 10 to 12). Of course, temperatures indoors are usually kept warm all year, so temperature is not usually a problem, but do watch out for cold drafts.

Grooming: Give your plant a shower every now and then to remove dust and dirt. Either that or go over the leaves with a sponge or rag dipped in soapy water to wipe it off.

The banana-leaf fig adapts well to pruning, but do remember that specimens placed in good light will grow back strongly if you cut them back seriously, so you may need to repeat the process. Otherwise, simply prune overly long or awkwardly placed stems whenever you see the need. Rather than prune to control size, it may be easier to slow the plant down by underpotting it. (See Repotting below.)

You can also hand pick any dead or dying leaves (no leaf lives forever!) or clip back any damaged ones. Remove too any dead twigs … but there won’t be many of them. This is not a weeping fig (F. benjamina), after all!

Do note that the tree drips a sticky white latex when you prune it, so place it on a sheet of cloth or plastic for a day or two until the dripping stops so the gummy sap doesn’t damage the floor or furniture.

The sap can be irritating to some people’s skin, so wear gloves when you prune.

Repotting: How big do you want your banana-leaf fig to grow? Because pot size has a huge influence.

If you want it to keep growing at a goodly rate, repot annually or every two years into increasing large pots. You can turn it into a huge indoor tree that way.

If you want it to stop growing, or at least seriously slow down, stop “potting up.” When it reaches the size you want, keep it in the same pot (or the same size pot) and just do a bit of annual top-dressing.

The best time to repot or top dress is in early spring, but any time from spring through fall is fine too. Repotting in winter, when the plant is barely growing, is not ideal. Any commercial potting mix will be perfectly suitable.

Multiplication: 15 to 20 cm (6 to 8 inch) cuttings root readily under high humidity. Dip them into water to rinse off a bit of latex, shake to remove the excess water, then lightly apply a standard rooting hormone and insert the cutting into a pot of moist soil. Then cover the pot with a clear plastic dome, bottle or bag to create the high humidity necessary and to keep it warm, also important. When new leaves start to appear, the young plant will be rooted and you can remove its covering over two or three days to acclimatize it to the drier air outside. It will root best in spring or summer.

It will sometimes root in water too … but sometimes it just dies.

You can also multiply banana-leaf fig by air layering.

Seed is almost never available, but if you find any, you could start it from seed as well, under high humidity.

Toxicity: The actual toxicity of banana-leaf fig is unknown, but the sap of other figs is slightly toxic to humans and pets, so there is a presumption of guilt it would be wise to heed. Usually cats and dogs won’t bother it, but if they show an interest, move it out of their way.

Problems: This usually isn’t a problem plant, but still, it isn’t totally immune to the “usual culprits”: mealybugs, scale insects, thrips and spider mites. The best cure is prevention. Before you put a newly purchased plant next to it, put the latter it in isolation for 40 days and then thoroughly inspect it. Sprays of insecticidal soap or neem oil will help control any pests that do show up.

The banana-leaf fig: you’ll probably find one in your local garden center. Maybe it’s time to try it!

1 comment on “Banana-Leaf Fig: The October 2021 Houseplant of the Month”