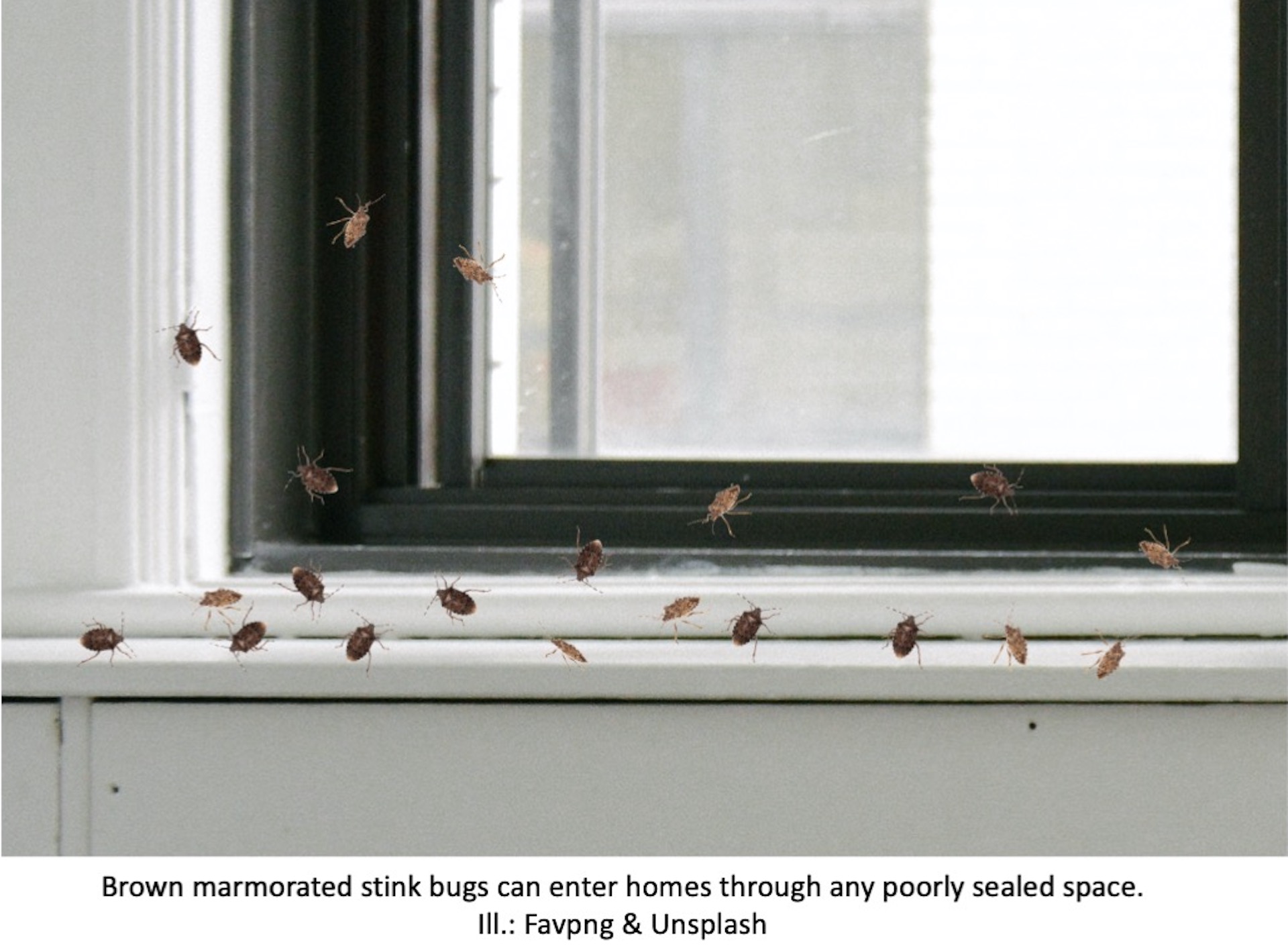 This is not a pest you’ll want to see move indoors for the winter!

There is a new enemy to watch out for in our gardens … and in our homes, because the brown marmorated stink bug (Halyomorpha halys) not only damages our plants, it even dares to enter our homes in the fall … and in large numbers!

So, what is this “brown marmorated stink bug”?

It’s an insect that was accidentally imported from Asia to North America about 20 years ago, probably in goods shipped from China, a first specimen having been found in Allentown, Pennsylvania in 1998. And this pest is now spreading like wildfire, having covered much of eastern North America, including well into Canada, and now racing through the West.

And if you’re reading this from Europe, things are no better. It’s believed to have been imported to Switzerland from China during the construction of the Chinese Garden in Zurich in 1998. It has since spread throughout much of mainland Europe and has now turned up in the United Kingdom (March 2021).

It’s causing major damage to crops in many areas and as a result, some orchards have simply been abandoned. Home gardeners too have been fighting this insect with its piercing mouth parts that damages so many everyday fruits and vegetables.

The adult brown marmorated stink bug is shield-shaped, fairly flat insect with brown mottling. It is between 14 and 17 mm (9/16” to 11/16”) long, roughly the size of an American dime or a European cent; somewhat smaller than a British 5-pence coin.

That would actually describe several native stink bugs too, but the brown marmorated stink bug is best told from the others by the edge of its abdomen and the last two segments of its antennae, both of which show broad alternating bands of very light and dark brown.

Newly hatched nymphs are dark red and black. Older nymphs (there are five instars) largely resemble smaller adults and show black and white stripes on their legs and antennae.

Adults emerge in the spring (late April to late May) and mate, then females deposit clusters of 20 to 30 light-green or yellow elliptical eggs on the undersides of plant leaves.

There is one generation per year in the northern part of its range, usually two in the middle, but up to six in the southern US and in southern Europe.

As the name “stink bug” suggests, the brown marmorated stink bug gives off an unpleasant odor when disturbed or crushed, smelling something like coriander.

The brown marmorated stink bug is a serious pest of a wide variety of plants, literally hundreds of species, including fruits, vegetables and other crops. Tomatoes, apples, peppers, grapes, corn, cherries, plums, soybeans and more are damaged and made unsaleable. In the home garden, damaged parts can often be pruned off, but that still requires a lot of extra effort to make plants edible.

Using their rostrum, both nymphs and adults pierce the epidermis of plants, injecting enzymes into it that liquefy the surrounding flesh, then slurp up the juice thus produced. This distorts the skin of the fleshy fruits and leaves spongy areas and internal tissue damage. On tomatoes, the damage—white or yellowish marks on the outside, whitish, spongy, damaged flesh inside—is called cloud spot.

When an Outdoor Pest Moves Indoors

Stink bugs abandon our gardens to also become unwanted house guests in September and October or when nights turn cool. Adults begin to search for a warm spot to overwinter and a human residence certainly fills the bill. They can enter homes in large numbers. Imagine: 26,000 were counted in a single residence in South Carolina! That’s out-and-out creepy1

At least these stink bugs don’t breed indoors nor do they cause any structural damage to the building, but let’s face it: that fact that hundreds and even thousands of little brown creepy crawlers can swarm into your abode is a very unpleasant thought. And if you crush them, on purpose or by accident, the stench can be almost unbearable.

Also, some people have become allergic to the smell of stink bugs, suffering from rhinitis and conjunctivitis; even dermatitis when there is physical contact. True enough, this only seems to affect a small percentage of the population, but still: it’s not something any of us wants.

How to Stop a Stink Bug Invasion

Before Stink Bugs Enter a Building

Physical exclusion remains the best method to prevent a marmorated stink bug invasion into homes and buildings. Here is what you can do:

After Stink Bugs Enter a Building

If stink bugs keep showing up in your house in spite of your best efforts to ban them, they obviously have some entrance you haven’t noticed. But you can still trap them inside walls (where they will be harmless) and thus deny them access to your inner sanctuary. So, go around the house and look for any openings where the stink bugs could move from the walls into the living space. That includes cracks under or behind baseboards, around windows and doors, and around air conditioners or ceiling lights. Seal these openings with caulk or other suitable material to wall the bugs in.

Live and dead stink bugs can be removed from the house using a vacuum cleaner. However, expect the vacuum to emit a stinky smell for several weeks afterward.

It is not advisable to use an insecticide to control stink bugs indoors. Such a product may kill stink bugs that have come out of their hiding places, but doesn’t seem to stop others from emerging. Even insecticides sprayed directly into the cracks where they have been seen have not been shown to be effective. And many of these insecticides pose a threat to the health of the house’s inhabitants.

A Predator to the Rescue

Since 2007, entomologists have been studying the idea of releasing a natural predator of the brown marmorated stink bug from Asia into areas where this insect was introduced and is wreaking havoc. There are several possibilities, but the most effective seems to be a small parasitic wasp, the samurai wasp (Trissolcus japonicus). Of course, the idea of releasing an alien insect to a new country always creates controversy. Is it really wise to introduce a new foreign insect to control another? Might it not become a pest in its turn?

Well, it turned out that the controversy has become mute. There was no need to artificially introduce the samurai wasp: it appeared all on its own, both in North America (2014) and in Europe (2017), no doubt brought over by accident from the Orient. Genetic testing has shown that these wild populations of samurai wasps were not escapees from a laboratory, but totally different strains to those under study.

The wasp multiplies faster than its host (there are up to 10 generations per year in Japan) and appears to tolerate a wide range of climatic conditions. Thus, there are good hopes that it can actually reduce the brown marmorated stink bug population to reasonable proportions at some time in the future.

This September and October, though, you might do best to close your windows and caulk the openings in your home. You wouldn’t want to see the marbled bedbug invading your home!