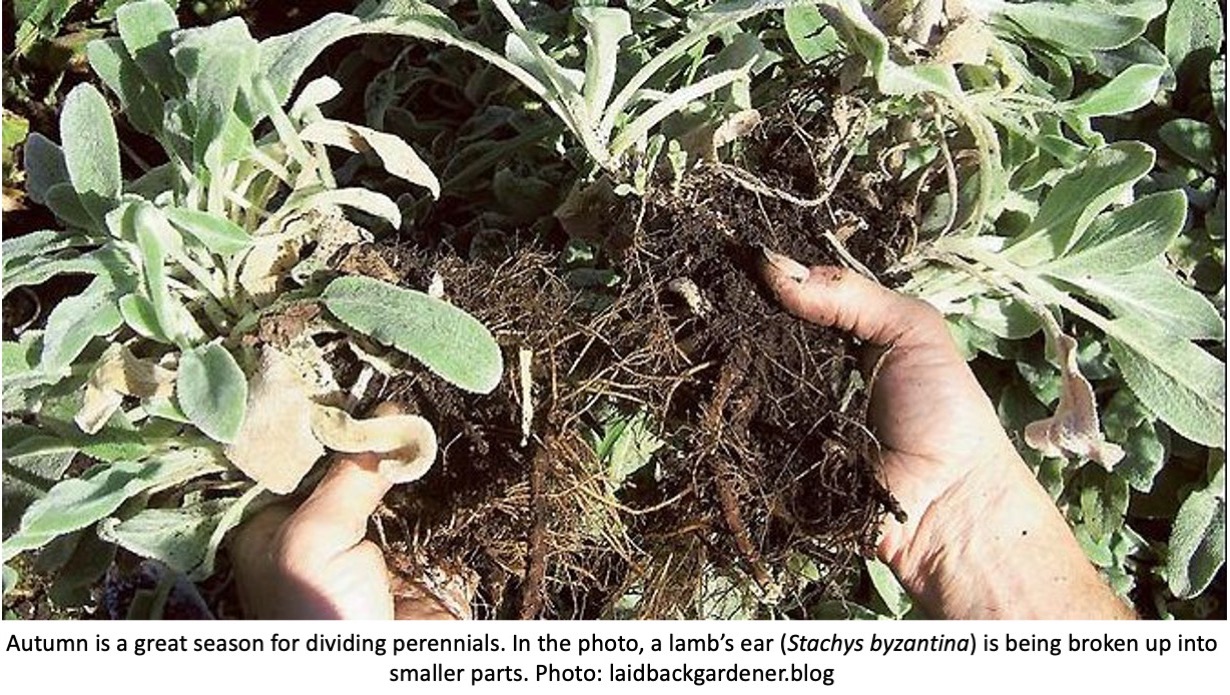 For many gardeners, there is only one season to divide their garden plants: spring. However, fall is actually just as suitable and sometimes even better for this age-old method of plant propagation.

What Plants Can You Divide?

Talk to any gardener about division and they’ll almost immediately think of perennials. And it’s true that you can divide almost any perennial. But then, you can also divide bulbs, grasses and even some shrubs.

Whether a plant can be divided or not is pretty easy to figure out. If there is only one stem or growth rising from the soil, clearly it can’t be divided. There’s nothing to divide: division implies there is more than one plant. I’m not saying such a plant can never be divided: perhaps in a year or so it will produce an offset or two, but until it does, no dice!

On the other hand, if the plant grows in a clump with several to many crowns or tufts of leaves either crowded together or more widely spaced apart, there is clearly more than one plant growing there. It might have been all on its own when you first planted it, but now the “plant” is really a cluster of plants and you can divide it.

Fall is a great time to divide most plants. After all, temperatures tend to be cooler and the soil is often moister, both of which help promotes rooting. Plus, most gardeners have more time on their hands than in the spring. Spring is often a mad rush to get things done. In the fall, you can do one thing at a time, and at your leisure.

The big exception is that, ideally, you wouldn’t divide in the fall plants that are in bloom in the fall. When plants are in flower, they use up more energy and are more likely to suffer stress than when they’re just vegetating. Plus, you would need to remove the flowers from any plant you divide, but why shorten their blooming season? So, if you can, put off dividing fall-blooming plants, such as asters, black-eyed susans, echinaceas and fall-flowering sedums, until spring. For all the others, such as those that bloom in spring or summer or those, like ferns, don’t bloom at all, fall division is perfectly fine.

There are several reasons for wanting to divide a plant.

When you divide a plant in the spring, there is no foliage—or only just a few buds starting to sprout—to get in your way. You can see exactly what you’re doing. In the fall, though, most perennials are still in full leaf when you divide them and, if the foliage is at all tall or thick, you won’t know where to start.

So, for once, cut back the leaves. Yes, usually you never cut back the healthy leaves of any plant, but this is an exception. Don’t be too concerned that cutting the leaves while they are still green will harm the plant, because by fall, the growing season for most perennials is close to being over. The leaves are still there, but they are no longer really contributing much to the plant.

This is the classic division, the one shown in most gardening books. It’s used either for plants that are difficult to divide or for perennials that you want to dig up and move anyway.

Take the peony as an example.

The herbaceous peony falls under the category of plants that “don’t like to be disturbed.” To divide it with as little stress as possible, though, fall division is ideal. It’s already essentially dormant and has been so since August, so division at this season will be less of a shock to its system.

With this sturdy-looking but actually delicate plant, it’s best to dig up the whole root ball. To do this, dig as deep as you can—the roots of the peony are long—all around the plant and hoist the plant out of the hole, setting it on the ground nearby. Rinse the roots well with a garden hose. You will see that the “mother plant” is actually made up of several plants linked together by carrot-shaped roots that are often intertwined. Now that the soil is removed and you can see what you are doing, cut between the plants, leaving each plant at least three to five buds (divisions with only one or two buds are possible, but will be years away from flowering).

For each division, dig a planting hole 3 times as wide as the root ball and as deep as needed to house it. You can mix compost or a little slow-release fertilizer with the soil removed to enrich it.

Replant the divisions to the same depth as they were originally, usually with the crown barely exposed, centering them in their hole. Herbaceous peonies are a bit of an exception. Plant them with the buds underground, pointing up, but never more than 2 inches (5 cm) deep. Planting too deeply may interfere with flowering

Note that a divided peony can take 3 to 5 years before flowering profusely, but it’s an exception. Most other perennials are faster and will flower vigorously the year following division!

Any good laidback gardener knows that you don’t have to dig up the entire root ball to divide most perennials.

If you just need a few more plants, or if your goal is to control an overgrown perennial, why disturb the mother plant by going through all the hassle of lifting the whole thing out of the ground? Just take a sharp spade and dig up a section from its outer rim. It’s like slicing a piece of pie: take a sharp shovel or spade, push it into the plant once, twice, then a third time and cut out a chunk of plant with attached roots.

It’s best to harvest the section behind the mother plant so that the removal doesn’t affect the plant’s appearance too much the following year.

Fill the hole left behind with good soil and then water well. The mother plant won’t react in the slightest to this minor intrusion!

Depending on the plant, it may be helpful to use a garden hose to rinse the soil off the chunk of plant you just removed. That will give you a better view of what you have to do. You will no doubt find that the “pie slice” harvested contains several plants, sometimes even dozens, each with its own tuft of leaves and roots. Pull the plants to separate them into individual plants (if you want as many plants as possible) or into clumps of three or four plants (for a faster recovery). If you can’t pull them apart, use a knife to slice between the plants. Then, simply replant them in a suitable location at their original depth.

Aftercare for fall-planted divisions simply involves watering when you finish, then again as needed over the coming weeks so the soil doesn’t dry out. You can also cover them with 2 to 4 inches (5 to 10 cm) of good mulch. (Don’t worry: they’ll grow right up through the mulch come spring.) Don’t hesitate to use as mulch the very leaves you cut off your perennials before you divided them: there is nothing a perennial likes better as mulch than its own foliage!

Almost all of your fall-divided perennials will be in bloom again the very next year!

4 comments on “Fall is For Dividing Too!”