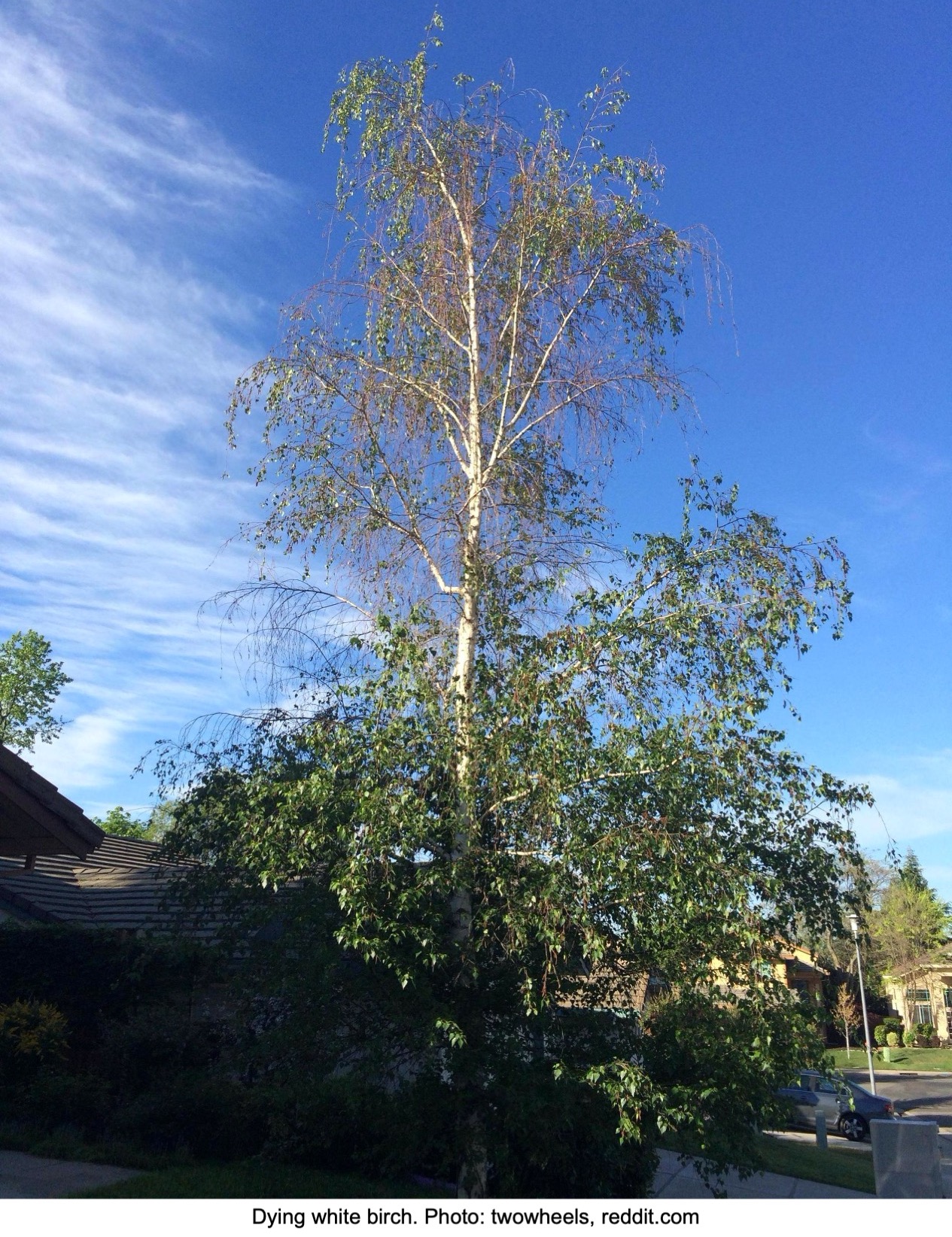 Question: I would like to know what has been going on in recent years with white birches. We lost a clump of three paper birches last year and since that time I have noticed that almost every birch tree in my neighborhood is also dying. Is this just a coincidence?

Answer: No. It’s actually a fairly common occurrence. But to understand, you need to know something about white birches.

These trees, with their attractive white bark, are common landscape trees in colder climates. They actually belong to several different species: there is the paper birch (Betula papyrifera) from North America, the silver birch (B. pendula) from northern Europe and several others found in the wild all across the upper latitudes of the northern hemisphere.

However, although these birches may be considered different species, they’re all closely related and all play the same role in nature: they are pioneer trees. Their role is to colonize freshly perturbed environments (after a fire, a flood, a landslide … or a home construction!) and grow quickly. Thus, they create the shade necessary for slow-to-start forest trees to begin to grow before being eventually overtaken by them.

White birches therefore never evolved for a long life. They’re designed to produce seed while young and persist in their environment through self-sowing. In a typical suburban garden in a cold-winter area, you can expect them to live some 30 to 40 years, then die off. These trees of the North are even less long-lived when you plant them in mild climates: few live more than 20 years in hardiness zones 6 to 9.

That isn’t to say that you don’t occasionally see very large white birch trees that can be 70 years old or even older, but that’s rather rare. Usually, white birches are simply short-lived: it’s just their way!

Some people blame this massive dieback of birches on the bronze birch borer (Agrilus anxius), a wood-boring North American insect that attacks white birch trees, but that’s putting the cart before the horse. Mother Nature’s role for the borer is to eliminate aging and ailing birches: it only slightly hastens the death of trees that are already dying. Treatments to control the borer therefore rarely give long-lasting results.

You can delay the death of a white birch by making sure the soil around it is always cool and moist. An application of mulch, which keeps the soil in just that state, is therefore helpful. The birch’s worst enemy is lawn: a birch surrounded by turf suffers more drought and heat than a well-mulched birch. And when a lawn mower or string trimmer bangs into the trunk—such a common occurrence! —, it causes injuries that are often slowly fatal. In addition, lawn fertilizers, which are rich in nitrogen, tend to be harmful to birches, causing faster but more vulnerable growth.

If you like birches, consider planting a longer-lived birch, such as river birch (B. nigra). Its bark, even more exfoliating than that of the paper birch, is variable in color, with creamy white, pink and pale brown all on the same trunk. It tolerates the heat of our suburban lawns better than white birches and lives a very long time for a birch. Under suburban conditions, you can expect 50 to 75 years of healthy growth. In addition, the birch borer rarely attacks it.

The river birch cultivar most widely available is Heritage (‘Cully’) and has an excellent reputation. Plus, it’s adapted to a wider range of growing conditions than any white birch, doing well notably in hardiness zones 4 to 9, sometimes even zone 3.

Two other long-lived birches you might want to consider are yellow birch (B. alleghaniensis) and sweet birch (B. lenta), but their nursery availability is limited and, like white birches, they do better in colder climates (hardiness zones 3 to 7).

There are now also longer-lived white birch selections, chosen from specimens that have been shown to have a particularly long life and to be more resistant to insects and disease. Two of these are paper birches: Renaissance Reflection® (B. papyrifera ‘Renci’) and Prairie Dream (B. papyrifera ‘Varen), zones 3 to 6. These varieties are worth trying if you want a white birch that will be sure to decorate your garden for a lifetime!

9 comments on “Why Are All the Neighborhood Birches Dying?”