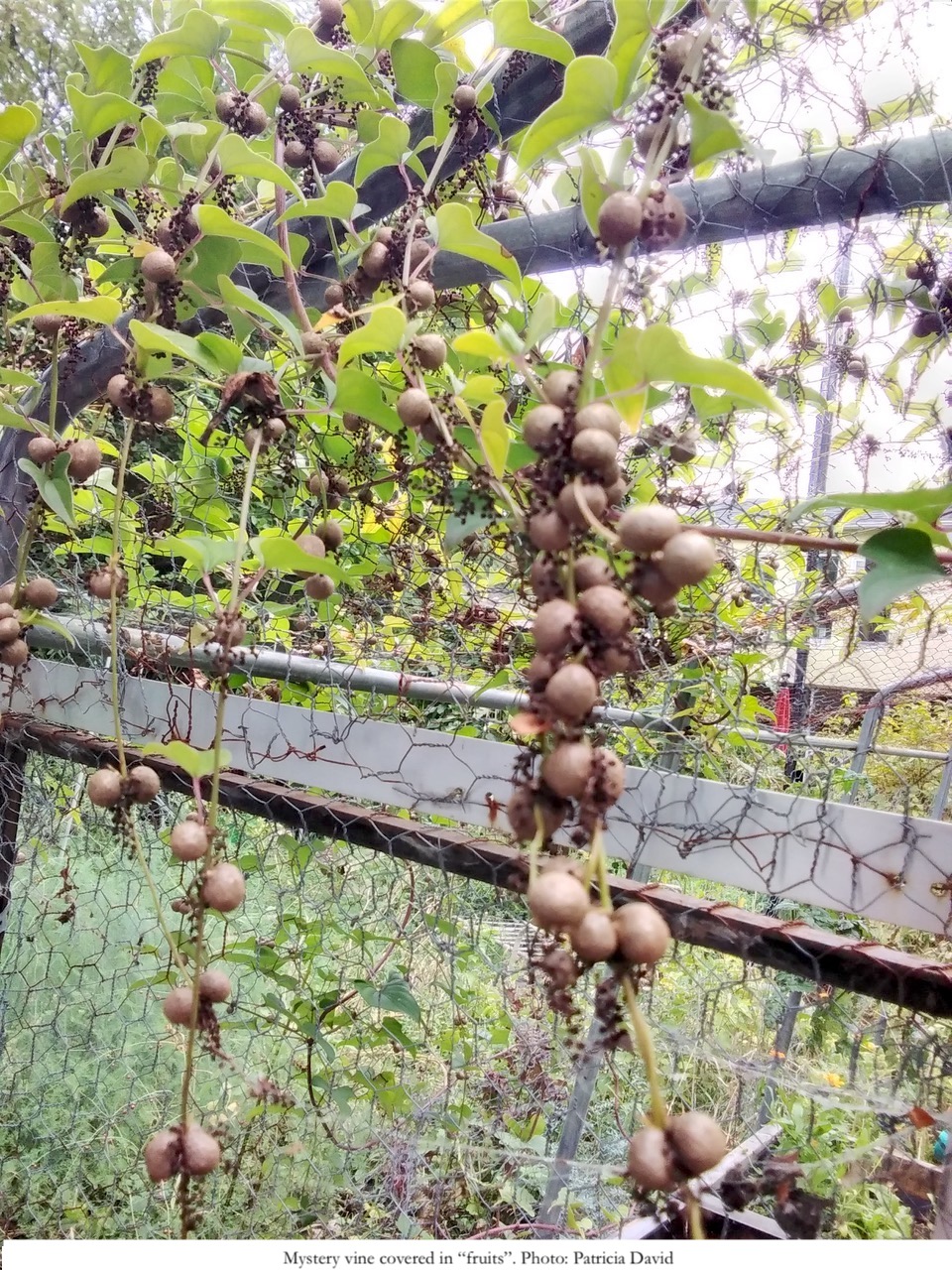 Question: A few years ago, I planted this climbing plant in my garden in Montreal. To my surprise, it comes back every year. This year it produced berries for the first time, but since I don’t remember the name of the plant, I’m not sure it’s edible.

Answer: Yes, it is edible and it’s even a popular vegetable in some parts of the world. Here’s a portrait of a plant some people consider a little-known climbing vegetable and others, a noxious weed.

Your plant is a Chinese yam (Dioscorea polystachya, formerly D. batatas). The small “fruits” borne at the leaf axils along the stem are actually bulbils, small aerial tubers that resemble tiny potatoes. They’re sometimes called yam berries, but, of course, are not berries at all. There are Chinese yam cultivars with bulbils of varying size in the Orient, but the varieties available in the West mostly seem to produce round bulbils of rarely more than 3/8 inch (1 cm) in diameter.

Don’t confuse the Chinese yam with the sweet potato (Ipomoea batatas), a tropical tuber many Americans call yam. True yams are in no way related to the sweet potato, in the morning glory family, Convolvulaceae, but belong to the genus Dioscorea in their own family, the Dioscoreaceae.

Bulbils are only produced in significant numbers when the summer is hot. Thus, Northern gardeners may not see them very often, while in the South, the plant can produce hundreds of them every year.

The bulbils are not the main crop, however. In fact, they’re usually considered too small to be of much culinary interest. Instead, it’s the main tuber, found underground, that is so popular in China, Japan, Korea and other Asian countries and is now being promoted as a vegetable for permaculture elsewhere.

It’s a long, spindle-shaped tuber reaching up to 3 ½ feet (1 m) in length and weighing up to 66 pounds (30 kg)! In a temperate climate garden, though, don’t expect anything that massive. There, an 8 inch (20 cm) tuber weighing about 2 to 2 ½ pounds (1 kg) would be considered an excellent harvest! The tuber generally forms at a considerable depth, 20 inches (50 cm) or more, so harvesting it requires a lot of effort, especially since it breaks readily if mishandled.

The tuber is normally harvested late in the fall when the aerial part of the plant begins to wither. In mild climates, it can also be harvested right through the winter. Again, gardeners in mild climates have a distinct advantage when it comes to harvesting tubers: they grow to a harvestable size in just one season, so can be collected annually, while it can take 2 to 4 years, even more, to get a tuber worth digging for in areas where summers are short.

The tubers of other yams (Dioscorea spp.) are poisonous until after they’re cooked, but the Chinese yam is an exception: it can be eaten both raw and cooked. When you peel off the pale brown skin, the floury white flesh, vaguely nutty in flavor, is served in different ways: grated, boiled, mashed, fried and even as yam chips. The tuber is rich in starch and vitamins C and B, but low in fat.

In its native lands, eastern Asia (China, Japan, Korea, Vietnam and the Philippines), Chinese yam is also used as a medicinal plant, although Western studies have not found it to have any therapeutic value.

The Chinese yam is an attractive climbing plant with twining stems that coil around their support such as a stake, a trellis, a shrub or a tree, reaching from 3 to 15 feet (1 to 5 m) in height. The shiny green leaves, about 2 to 4 inches (3–11 cm) long, are heart-shaped and have parallel veins, a feature quite unusual in a temperate plant. They create a charming effect and the plant can therefore be used as an ornamental climber.

Clusters of tiny yellowish flowers appear in the leaf axils in warmer years. They’re insignificant, although they do smell of cinnamon, giving this another common name: cinnamon vine.

This plant almost never produces seeds under garden conditions. It’s dioecious (male and female flowers are borne on separate plants), but usually only male plants are found in gardens, making fecundation impossible. If you see “Chinese yam seed” offered for sale, it will be bulbils, not actual seeds.

Indeed, the plant is most easily propagated by bulbils harvested in the fall and planted immediately or, if kept cool during the winter, in the spring. Also, at harvest, the upper end of the tuber can be cut off and replanted, then will root to form a new plant. It is also possible to take stem cuttings.

This plant is the hardiest of some 600 species of yam (Dioscorea spp.), adapted to temperate to subtropical climates (most others require tropical conditions). Chinese yam is said to be hardy down to 0 °F (-18 °C), and to be adapted to USDA hardiness zones 5 to 10 (AgCan zones 6 to 10), but it is obviously thriving in Montreal, Canada, hardiness zone USDA zone 4 (AgCan zone 5) and does fine in my own garden even further north in USDA zone 3 (AgCan zone 4), so it is clearly hardier than claimed.

However, I must admit that in my climate, I never see such vigorous growth as in the lead photo. Yearly, my 25-year-old plant grows to no more than 4 feet (1.4 m) tall and has never bloomed. Bulbils are rarely produced: at most, 1 or 2 per year. In most years, there are none. I’ve always assumed that my summers were simply not hot enough for this heat-loving plant to produce major crop of bulbils.

Chinese yam adapts to sun or partial shade, even shade, in rich, deep soil that is moist but well-drained. A good winter mulch will be vital in colder regions. Commercially, “seeds” are available in the spring or fall. Plant them about 3 to 5 inches (8–12 cm) deep, especially in cold climates.

If you plant bulbils in the fall in a cold climate, a good thick mulch over the planting area will be necessary. Otherwise, they can be killed by the cold, as happens to any bulbils that fall to the ground without frost protection.

This plant has been shown to be invasive in warm temperate climates because bulbils are easily carried out of gardens by small animals and flowing water (they float) and become established in natural environments. While this is less likely where winters are cold, given the poor frost tolerance of unburied bulbils, the fact remains that, with our warming climate, if you introduce this perennial vegetable to your permaculture bed, it would be wise to make sure you harvest all the bulbils each fall to avoid any risk of dispersal.

A Question of Legality

When researching this article, I was surprised to discover that distributing this vegetable in my country, Canada, is illegal. Yet I see Chinese yam “seeds” being offered for sale on the Internet in my country and the bulbils can also be found in fall in farmers markets and Asian grocery stores, so apparently the law is not being enforced.

Chinese yam is regulated as a pest in Canada under the Plant Protection Act. Importation and domestic movement of regulated plants and their propagative parts is prohibited.

So, if you already own a plant, you’d be allowed to keep growing it, but you can’t move it or share it.

This plant has been shown to be very invasive in the southeastern United States, but only two states actually ban growing it: Alabama and Florida.

In Europe, growing Chinese yam seems to be legal everywhere and it is even part of the repertoire of permaculture vegetables recommended by several urban gardening organizations. Even Australia, which is generally so strict about invasive alien plants, permits its sale.

Chinese yam: both a very original and ornamental climbing plant and a nutritious vegetable, but its ability to become seriously invasive ought to make you think twice about planting it, even where its distribution is legal.

5 comments on “What Vine Is This?”