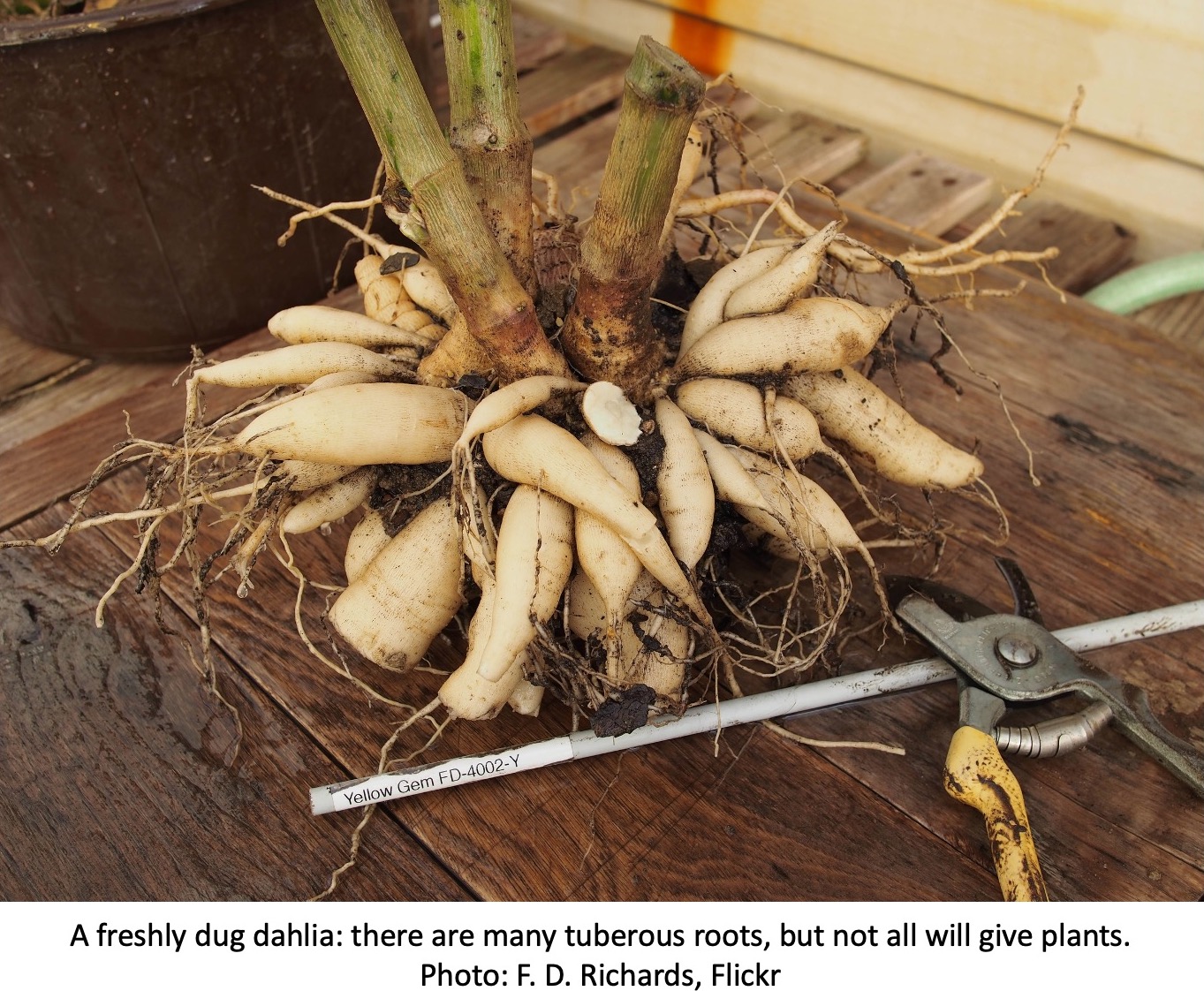 Question: (Re How to Lift and Store Tender Bulbs for Winter) Thanks for this information. I don’t have much experience with dahlias. Is each oval tuber hanging from the stalk a new plant? If I replanted each oval tuber separately, would I get more plants? Or do I just replant the entire clump next year? Thanks for your help!

Answer: Whether you divide dahlias or not depends on their state when you dig them up. If there are only a half dozen or so tuberous roots, there is no need to divide, but there probably will be in a year or so, as the plant grows. If there are a lot of tubers, it’s best to divide them. If the clump becomes too dense, that can negatively affect bloom.

As to whether you can divide dahlias in the fall, yes, you can do that … or you could do so in the spring. And it’s not quite as simple as just cutting a tuber free. Here’s why:

The tuber of a dahlia is a thickened root, called a tuberous root, a sort of a storage area for the starches, sugars and minerals that help the plant get through the winter storage to come. However, the eye (bud) that will give a new plant in spring doesn’t grow directly from the tuberous root: it’s not like a potato tuber that has eyes right on the tuber. With dahlias, the eye is found at the base of the stem just above: the crown.

Therefore, you can’t simply cut the tubers free: if you do, nothing will grow. (I once watched a garden commentator who clearly did not know dahlias do this on television: I cringed in horror as he cut off each root at its tip, thus killing it!) You need a tuber with a piece of stem attached and, furthermore, it has to be a piece of stem that bears an eye. Often, you’ll end up with two or three tubers (or even more) sharing just one eye. A tuber without an eye is said to be blind, as no plant will grow from it.

Experienced growers do usually divide their tubers in the fall, when the stems are soft and easier to cut, but then, they’re able to recognize the beginning of an eye, a little bump at the base of the stem.

For beginners, it might be best to wait until spring to divide the tubers. By then, the eyes will be well formed, even sprouting, so it will be very clear where you have to cut.

The downside of waiting until spring to divide your dahlias that you may need to saw through the now hard stems with a serrated knife to separate the divisions or use a lopper (the long handles give you greater force); pruning shears may not be powerful enough. Not all dahlia stems are that hard to cut … but some are!

The intermediate method is to divide your tubers into clumps of two or three in the fall rather than individually, always, of course, including a section of stem. For example, you could cut the clump in half (cutting through the stem from above), then cut the half clump in half. That way, you almost always have at least one viable eye per section the plant can grow back from.

As for winter storage, you can reread How to Lift and Store Tender Bulbs for Winter.

8 comments on “When to Divide Dahlias: Fall or Spring?”