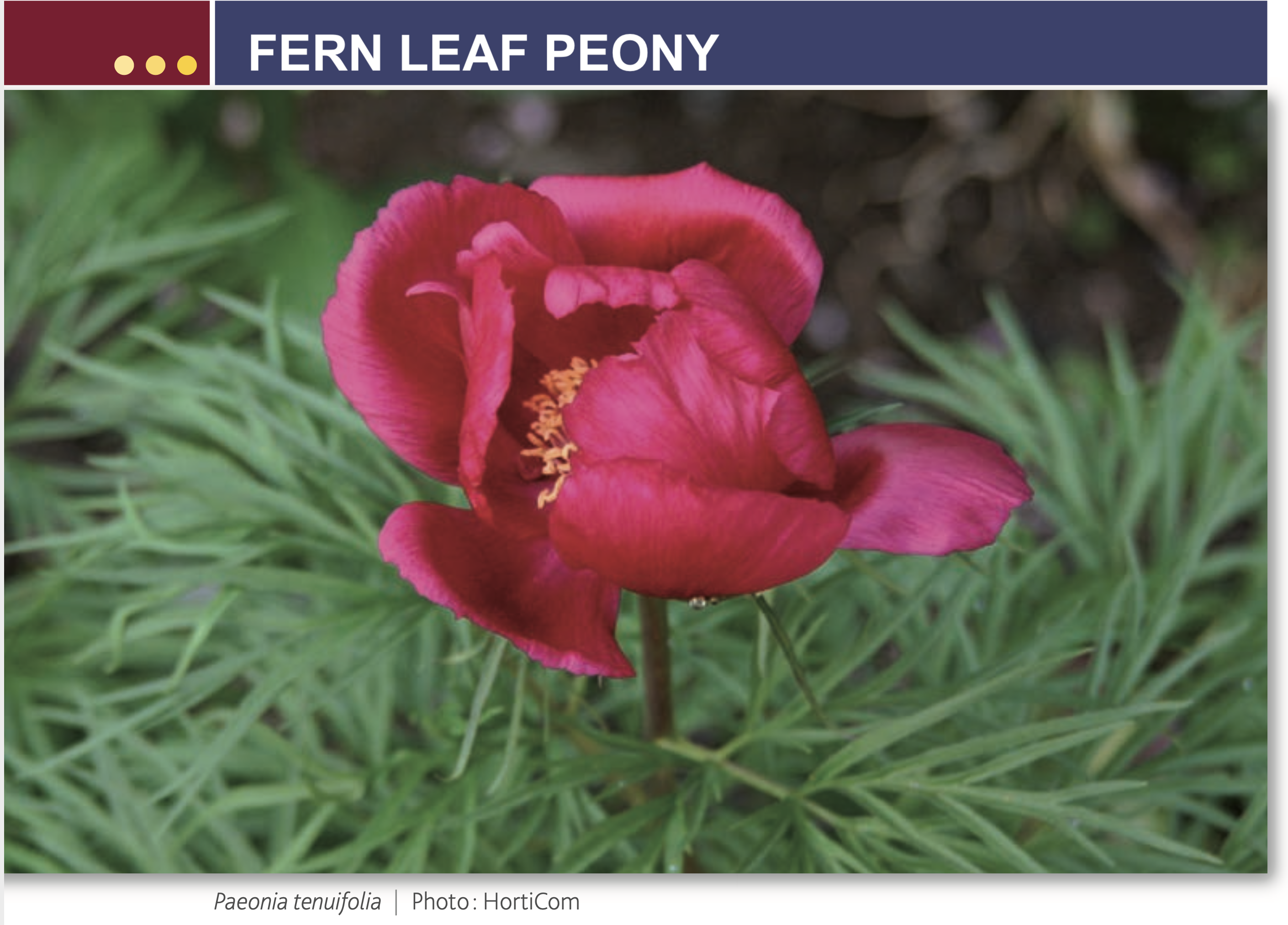 Sure, garden peonies (Paeonia lactiflora) and intersectional or Itoh peonies (P. i-hybrid) are great garden plants, but there is one I like even better, one I grow at least as much for its foliage as its flowers: the fern leaf peony (Paeonia tenuifolia). This species is a common enough garden plant in parts of Canada and the US, brought over generations ago by Ukrainian immigrants from their native land as a simple root division, but is almost unknown elsewhere … yet it’s an easy-to-grow plant that the average temperate climate gardener really should try.

This is not an inexpensive plant. It’s very slow growing, so it takes years to produce a saleable plant and the gardener pays the price. But I think it’s worth it. Besides, the price has come down over the years. When I bought my plant (now 3 plants, as I’ve divided mine), I paid $110 for it: yes, no kidding! And that was after years of hesitation about paying so much for just one. Yet I knew I had to have it, so… However, you can now find it in the $40 range. For a quality peony, that’s not excessive.

Description: With the fern leaf peony, you really have a long season of interest. As soon as the snow melts, the show begins: a large round flower bud emerges from the ground surrounded by a ground-hugging rosette of very deeply cut, reddish leaves, similar to the type of frilly lace collar worn by 15th-century nobles.

The finely cut leaves are said to look like fern leaves. I rather think they look more like those of the garden cosmos (Cosmos bipinnatus).

The leaves soon turn medium green and the stem gradually lengthens, the leaves following and spreading out along the stem, covering it entirely like green froth. The single flower bud rises with the stem and soon enlarges and reddens, then opens opening to reveal a cup-shaped flower with bright red petals surrounding a mass of yellow stamens. The flower is not as large as that of common peonies, but, at about 3 inches (8 cm) in diameter, it’s still big enough to impress. The fern-leaved peony is at the height of its glory during flower bulb season, when most of the other peonies are still dormant or just barely showing!

The petals drop off after about 7 to 10 days. Seeds don’t form on the most common variety, ‘Plena’, so no deadheading is required. If you have a different variety and seeds start to form, just let them grow to maturity and harvest them to produce more plants. This won’t harm or weaken the plant.

Once the petals fall, the plant redefines itself. It is no longer a flowering plant, but, at least visually, a “shrub” with ferny leaves. In areas where the summer is hot and dry, the leaves turn brown and drop in midsummer, then the plant goes into summer dormancy. Where I live, where summers are neither particularly hot nor particularly dry, they remain green until fall, but then turn brown quite quickly, early in September. This peony has none of the burgundy-red fall hues common in garden peonies. The brown leaves soon drop off, leaving little to clean up. You can just let them decompose where they fall as part of your garden’s mulch.

As with all peonies, the effect of the fern leaf peony improves over time. Young plants are beautiful and fascinating, but a well-established plant, with dozens of delicately lacy stems and a rounded mini-shrub habit, is sublime.

CARE: Growing the fern-leaved peony is about the same as growing any herbaceous peony, so many gardeners already know what to do.

Give it full sun if you can. After all, this plant comes from the windswept steppes of Eurasia where shade is rare. If you only have partial shade to offer, sobeit, but if so, prefer single-flowered varieties: they seem to stronger flower stalks in conditions of less than perfect light.

As for the soil, that’s of fairly little importance, as it adapts to most soils, rich or poor, acid or alkaline. However, ideally it would be moderately rich and well drained but not dry. It does better in heavy soils (as long as they drain well) than in sandy ones.

The soil must also be deep: its roots are long and a thin layer of good soil over impenetrable rock would not be suitable.

Think “permanent location”, as, like other peonies, fern leaf peony does not tolerate transplantation well.

Never let newly established plants dry out completely. Mature plants, on the other hand, will likely only need watering during the worst droughts, especially if you mulch them. If they turn brown in the summer, though, no need to panic: they’ve just gone into summer dormancy, a normal state for them.

As for fertilization, I know of a few places where you can see abandoned fern-leaved peonies blooming profusely every year without the slightest fertilization, but to achieve the best flowering, no harm comes from giving them a few minerals every now and then. To this end, applying a compostable mulch all around the plant is ideal because it constantly releases minerals, but you could also give it slow-release fertilizer from time to time.

A lot has been written about planting peonies as if it were particularly complicated, but it’s really not that special. Just plant your peony like any other perennial, except you have to remember that dormant buds should never be buried more than 2 inches (5 cm) deep. When they are buried too deeply, the plant becomes “blind”: it only produces foliage, not flowers. Simple enough! Dig, drop, fill, done!

If you buy this peony as a potted plant, you can plant it at any season. Just keep the root ball intact so the roots won’t be disturbed. The best time to plant a bare root fern leaf peony (it is sold in that form by many specialist nurseries) is in late August or fall. However, a bare root plant can be planted early in the spring if it’s available that season.

No pruning is necessary, even in the fall.

PROPAGATION: This is best done by seed (in this case, be patient, as it may take seven years or more before you see the first flower) or by division. As with other herbaceous peonies, division is mostly done in the fall.

USES: With its small size and elegant ferny appearance, this peony can work well in the foreground of a flower bed, in a rock garden, or along the border of a path. It also makes a great mini hedge … if you can afford multiple plants!

COMPANIONS: It is always fun to contrast plants with very fine foliage with plants with coarser foliage, such as bergenia (Bergenia spp.) or umbrella plant (Darmera peltata)

OTHER FERN-LEAF PEONIES: The species itself, P. tenuifolia, with single red flowers, remains rather hard to find.

The best known and most widely available variety is P. tenuifolia ‘Plena’, also called ’Rubra Plena ’, with very double red flowers that show no trace of yellow stamens. It is usually a little taller than the species—16 to 20 inches (40 to 50 cm)—and flowers a little later. Sterile, it produces no seed.

P. tenuifolia ‘Itoba’: the single dark red heart-shaped petals surround a mass of yellow petaloids, like a Japanese-type peony. Its foliage is less finely cut than the species.

P. × smouthii: this old-fashioned peony of uncertain origin (it has been available since 1843) is surely closely related to P. tenuifolia. Its small pinkish-red flowers, usually borne two per stem, are nicely scented and produced early in the season. The leaves are finely cut. It’s a taller plant as well: 18 to 26 inches (45 to 70 cm).

P. ‘Early Bird’: this is another cutleaf peony with P. tenuifolia as one of its parents. It has deep red single flowers. 20 inches (8 cm).

5 comments on “My Favorite Peony”