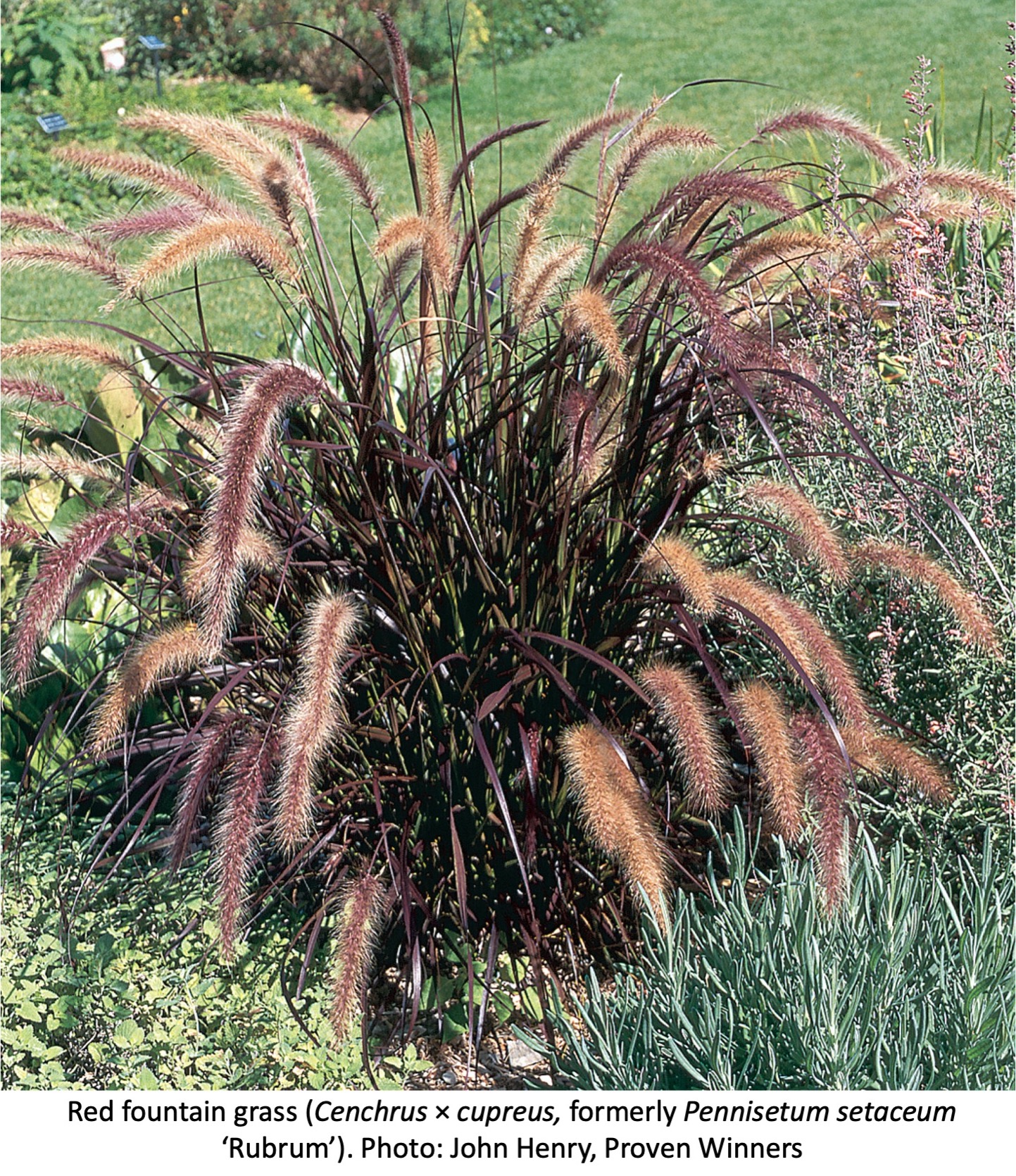 Even if you’ve already had a frost or two, it’s probably not too late to save your purple fountain grass (Cenchrus × cupreus, formerly Pennisetum setaceus ‘Rubrum’) from the cold.

This beautiful grass has reddish-purple foliage and arching foxtail-shaped flower spikes that dance in the slightest breeze, turning from pink to silver as the summer advances. It’s a very popular summer garden and container plant. However, nurseries offer purple fountain grass as an annual grass, so most gardeners obligingly leave it to freeze in the fall, assuming it’s doomed to die anyway. But it is not in fact an annual, but a tender perennial grass (hardiness zones 9 to 11) you can easily overwinter indoors.

And, as mentioned above, it’s probably not too late to save your plant, as it will tolerate quite a bit of frost: down to about 15˚F (-10˚C) is long as it doesn’t last long enough to damage the plant’s crown. So, if you act quickly, before the real winter cold sets in, you ought to be able to bring it indoors while it is still in decent shape.

Purple fountain grass has undergone a number of name changes over the last few years. Originally offered as Pennisetum setaceum ‘Rubrum’, it differed from the species P. setaceum in many aspects, notably in its drooping, sterile flowers rather than upright fertile ones and, most obviously, purple leaves, but also in its genes as well, as DNA studies showed. Notably, P. setaceum is a diploid while P. × advena is a hexaploid.

Purple fountain grass is not known from the wild and is considered likely to be a hybrid of P. elegans crossed with P.setaceum. This is a vital distinction, since P. setaceum is a tropical grass that is banned in Europe (and some other areas) for its invasive tendencies in mild climates. The hybrid, being essentially sterile (few fertile seeds are produced and those that do germinate poorly or give weak plants that rarely survive), is not invasive and can be grown there legally. (Nice to know!)

However, the name of the entire genus of fountain grasses, Pennisetum, has now been merged into Cenchrus, a name that has botanical priority over Pennisetum, since the first species of this grass ever named was listed as Cenchrus. As a result, purple fountain grass is now Cenchrus × cupreus. (P. setaceum too is now a Cenchrus under the name C. setaceus.)

Container-grown purple fountain grasses are simple to bring indoors: just clean off the pot and carry them in. If yours are planted in the garden, you’ll have to dig them up and put them in a pot.

Remove the old leaves and flower stalks when you bring the plant indoors, cutting them back to about 2 or 3 inches (3–5 cm) high. Place the plant near a sunny window. Normal room temperatures are quite acceptable, but it will also do fine in cooler rooms with night temperatures down to about 40˚F (5˚C).

Water the plant like any houseplant, that is, when the potting mix is dry to the touch. Don’t fertilize it in the fall and winter, though: you don’t want to encourage rapid growth while the sun is so weak: that will only give floppy, etiolated leaves. So put the fertilizer away and let slow and steady be your motto, at least until the longer days of spring.

Note that though the foliage will grow back fairly quickly after the plant’s severe pruning, its new leaves will probably be entirely green or only slightly reddish: that’s because the plant’s reddish-purple coloring only truly comes out when the plant is exposed to intense sunlight, as in outdoors. Without enough ultraviolet light, the leaves remain green. Indoors, your plant will look more like a pot of ordinary lawn grass—and a bit pale at that!—than the splendid purple fountain grass it becomes in summer!

In March, you can divide the clump if you want and repot the divisions. Or take cuttings. This will give you more plants to put outside for the summer!

When there is no longer any risk of frost, gradually acclimatize the divisions to outdoor conditions and pretty soon you’ll have striking red-purple grasses with swaying foxtail flower spikes to brighten your garden all summer!

There is also a group of former pennisetums with purple foliage from a different background. Derived from Napier grass (Cenchrus purpureus, formerly Pennisetum purpureum), also called elephant grass because of its great height—up to 20 feet/6 m in the tropics!—, these purple Napier grasses are grown as perennial grasses in zones 9 to 12 and as annual ornamental grasses in temperate areas. Some are pure Napier grass selections, but some are hybrids involving other species. Dwarf purple Napier grasses are popular for their dense clumps of fairly broad, deep purple leaves. They’re strictly foliage plants: they don’t bloom in short season climates. Actually, they rarely flower even in the tropics unless the local climate can offer both heat all year and short days.

This group includes such cultivars as ‘Prince’, ‘Princess Caroline’, Vertigo® and First Knight™. Like purple fountain grasses, purple Napier grasses are not true annuals, and so can be brought indoors for the winter. Just treat them the same way you would purple fountain grass.

Don’t expect much growth on Napier grass until temperatures warm up late in spring, though: it does like the heat!

Another former pennisetum, millet or pearl millet (Cenchrus americanus, formerly Pennisetum glaucum) is a major cereal crop in many tropical countries and very popular in bird seed mixes, It has also given rise to several ornamental cultivars with colorful leaves, such as ‘Purple Majesty’, ‘Purple Baron’, ‘Jade Princess’ and ‘Purple Jester’. It has broad leaves much like corn (maize) and a very thick, upright flower spike that fills with edible seeds.

Millet is a true annual and dies in the fall, even in the tropics. Typically, you would collect seeds from ornamental varieties and sow them in late winter indoors for another season of growth. If you have one of these in your garden, you can therefore collect its seeds now … if the birds haven’t already eaten them all!

Oriental fountain grass (Cenchrus orientalis, formerly Pennisetum orientale) is just a lovely and about as hardy, with pinkish foxtail spikes. ‘Karley Rose’ is the best-known cultivar.

Hardy fountain grasses don’t need to be brought indoors over the winter.

So, what are you waiting for? Get out there and go save your purple fountain grasses while there’s still time!

Article updated from one published in this blog on octobre 20, 2015.