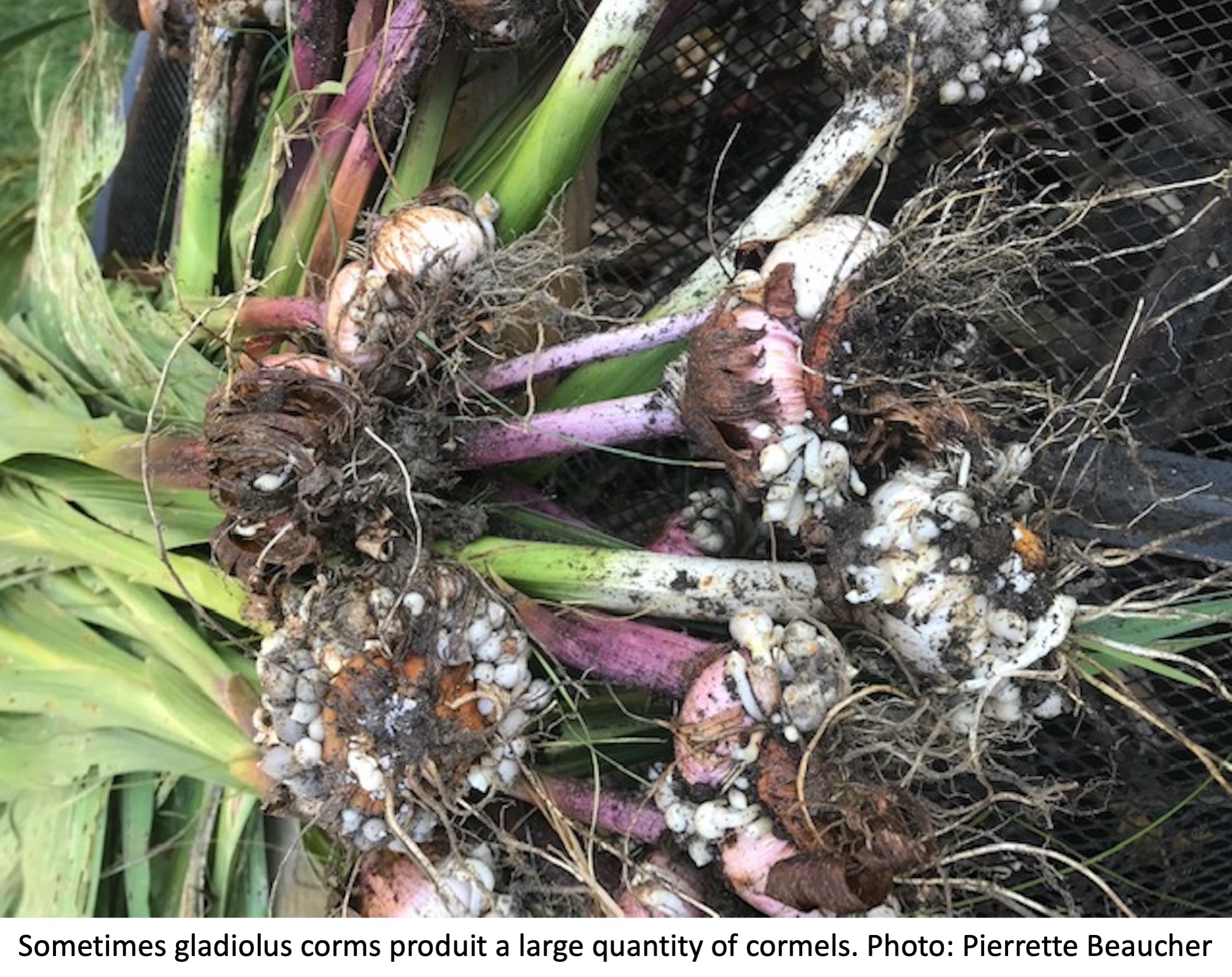 Question: I just dug up my gladioli and found a large number of very small bulbs all around the original bulb. Can I use them to propagate my plants?

Answer: Yes, but do be aware you won’t be seeing these cormels (bulblets) bloom any time soon. It will require a bit of patience. So, let’s first look at another way of multiplying your gladioli (Gladiolus cvs) that will give you flowers the very next year.

As you dig up your gladiolus corms (bulbs) in late fall, you’ll notice that the corm you originally planted in the spring has dried up and died, but a new corm has formed on top of it. And there is often not only one corm, but two. Separating these two twin corms is the easiest method of multiplying gladiolus, as the two will already be of sufficient size to flower the next year.

So, when you dig up your gladioli, leave the corms in a dry, well-aerated spot, but protected from frost (in a garage or tool shed, for example) for 2 or 3 weeks, until the foliage dries up. Then it will be possible to clean them without much effort. Remove the leaves and dried roots, which will then come off easily. Now, remove and compost the old, withered corm … and in doing so, you’ll find the two corms will automatically separate. So simple!

Now you just have to store them in a safe spot until spring. You can find information on overwintering tender bulbs like gladioli in the article How to Lift and Store Tender Bulbs for Winter.

As for multiplication by cormels, remove them before storing the corms. They are sometimes very numerous and, in that case, unless you want to have hundreds of plants, limit your selection to the larger ones, as they’ll come into bloom the fastest. You can overwinter the cormels under the same conditions as the corms.

When you plant cormels next spring, however, you won’t have flowers right away. Rather, you will need to let them grow larger before you see bloom: most likely for 2 or 3 years. So, transplant them into the garden in the spring, perhaps in an inconspicuous spot since all they’ll show will be grasslike foliage, and bring them in again next fall.

The cormels will then be much larger, looking much like a miniature version of the mature corms, but are still too small to flower. It normally takes at least another year of growing in the ground before your corms will be ready to flower. So, store them again over the winter, plant them in the spring and the next fall, dig them up yet again. Just maybe they’ll be large enough to bloom the following year!

And if not, well … you now know the routine!

When it comes to propagating gladiolus by cormels, patience is definitely a virtue!

2 comments on “What to Do with Baby Gladiolus Bulbs?”