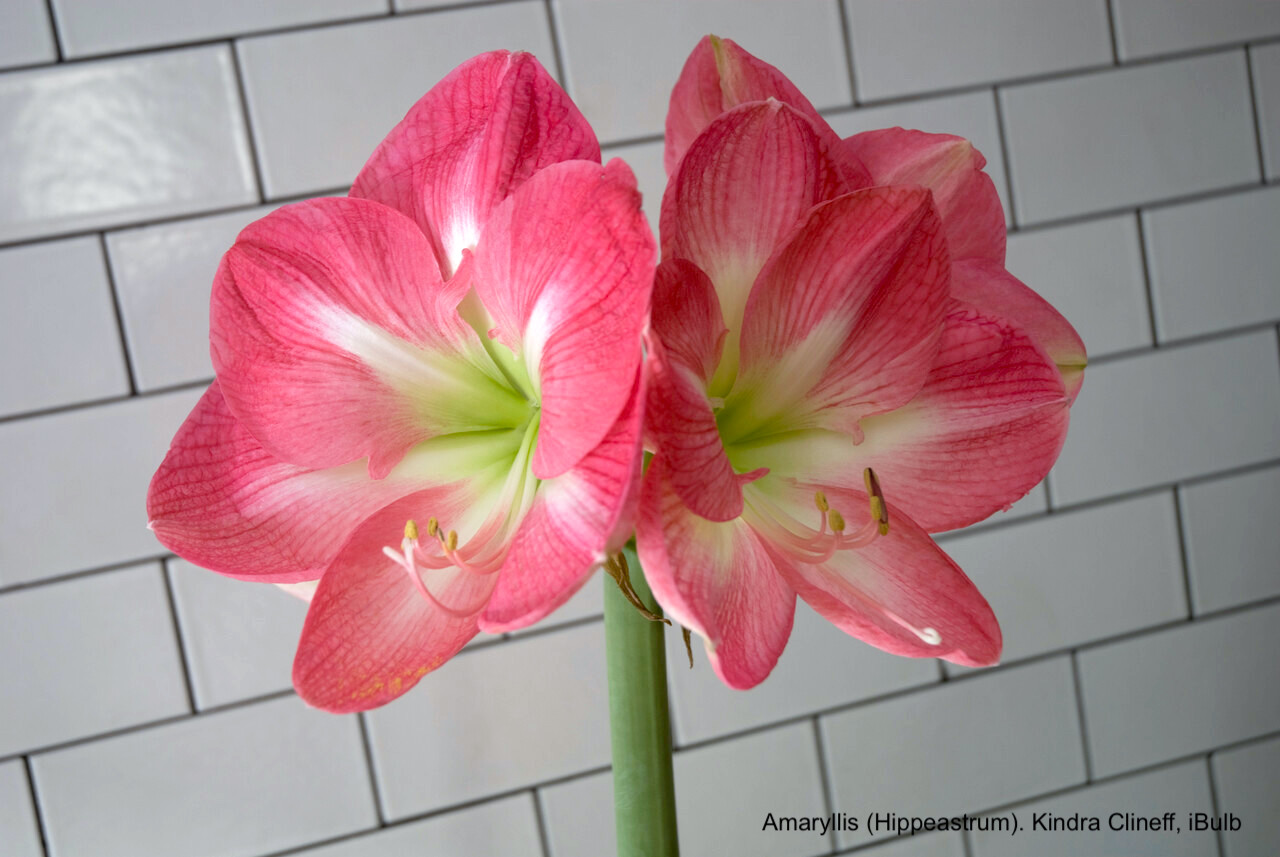 Amaryllis (Hippeastrum cvs) bulbs are in stores everywhere from mid-fall through early winter. Not only garden centers, but hardware stores and even supermarkets. With their giant flowers and their ability to bloom around Christmas, they’re very popular. But how much do we really know about this best-selling houseplant?

Here are a few surprising facts about the amaryllis that you might enjoy:

1. The name amaryllis comes from a Greek legend. Amaryllis was a nymph who fell hopelessly in love with the handsome shepherd Alteo, but he showed no interest in her. He was only interested in flowers. On the advice of the oracle of Delphi, she visited his cottage daily, piercing her heart with an arrow so drops of blood fell to the ground. On the 30th day, beautiful red flowers appeared where her blood had fallen. This attracted Alteo’s attention, and he fell in love with the nymph. (Do not try this at home!)

2. The amaryllis isn’t an Amaryllis. The plant we call amaryllis belongs to the genus Hippeastrum and is from the New World tropics. The true amaryllis, of South African origin, is Amaryllis belladonna, called belladonna lily, naked ladies or Jersey lily. The two do belong to the same family, the Amaryllidaceae, grow from a bulb and have funnel-shaped flowers … but that’s all. The belladonna lily is a hardier plant you can grow outdoors in some temperate climates (USDA hardiness zones 5 to 9, AgCan zones 6 to 9). It produces its flowers in the fall, without foliage (the leaves appear separately, in the spring). You can tell the two plants apart by the flower stalk. Hippeastrum has a hollow stalk, Amaryllis, a full one.

3. The name Hippeastrum means knight’s star, from the ancient Greek hippeus (mounted knight) and astron (star). This refers to the white starlike markings on so many wild species of amaryllis.

4. Amaryllis flowers come in all sorts of shapes and colors. Red may be the most popular color, but you can find them in pink, salmon, orange, white, yellow, and green and many are bicolor or tricolor. The flowers are usually funnel-shaped, but there are trumpet-shaped varieties and many modern varieties have double flowers.

Yet others have more open, spiderlike flowers with narrow tepals.These are often called cybister varieties, because their main parent is H. cybister, a wild species with very thin tepals.

5. For the best blooms, buy the biggest bulbs! Some amaryllis have bulbs over 40 cm in circumference and these usually produce 4 flower stalks. However, they are rarely available to home gardeners. So-called Jumbo bulbs (34/36 cm) are usually the best you’ll be able to find and should produce 3 stems with 4 to 5 flowers per stem. Do note that some smaller amaryllis have naturally small bulbs and for those, 28/30 cm bulbs will be the biggest you can find.

6. The worldwide hub of amaryllis production is the Netherlands. They produce some 15 million bulbs a year, all under glass in some 750,000 m2 of greenhouses. However, they import even more from such countries as Israel, South Africa, Brazil, and Peru (where the bulbs are often grown outdoors), then resell them around the world.

7. Amaryllis bulbs already contain their future flowers when you buy them. Yes, there is at least one flower bud inside, ready to pop out! According to Dutch law, they must be inspected before sale to make sure they house a bud or two or three and thus that they’ll bloom. That’s why they’re so easy to bloom the first time around.

8. Some amaryllis are epiphytes. Yes, their bulbs grow on trees! That is the case for such species as Hippeastrum arboricola, H. aulicum, H. calyptratum and H. papilio.

H. papilio is known as the butterfly amaryllis because the petals are said to resemble the wings of a swallowtail butterfly, is the only widely available epiphytic amaryllis, found in stores everywhere. However, it is rarely grown as an epiphyte indoors, but rather in a pot like other amaryllis.

9. There are hardy amaryllis. Well, at least somewhat hardy. One, H. × johnstonii, is even sold as “the hardy amaryllis” in some catalogs and can grow in USDA hardiness zones 7 to 9 (AgCan zones 8 to 9), even sometimes zone 6 (AgCan zone 7). Most others, though, are strictly tropical and usually grown as houseplants except, of course, in tropical or near-tropical areas.

11. Christmas is not the normal flowering period for amaryllis bulbs. Since they are popular flowers at that season, most bulbs on sale have been specially treated by the grower to flower in December, but, given their druthers, most would bloom in spring or even summer. To force them for Christmas, they are pushed into dormancy by withholding water in early fall. When the foliage starts to yellow*, they’re put in a cooler spot at 39–55 °F (4–13 °C). After 6 to 10 weeks (each variety has its own specific timetable), the bulbs are ready for pre-Christmas sale!

* Some species are evergreen and their leaves remain green even when water is withheld.

12. There are over 90 species of Hippeastrum and over 600 hybrids. Take your pick!

13. In the home, amaryllis are most readily propagated by division. Bulbs produce offsets (bulbils) that can be separated from the bulb and potted up individually. Some produce many offsets, others very few. You’ll find information on dividing amaryllis in the article How to Divide an Amaryllis.

14. You can also grow amaryllis from seed. If the flower is pollinated, it will produce lumpy seed capsules that open to reveal brown seeds. These can be sown to produce new plants, but … the plants are unlikely to be identical to the mother amaryllis, as almost all amaryllis are hybrids and contain a mixture of genes from various parents. And seed-grown plants can take up to 6 years to bloom! If you still want to try, you can learn about growing amaryllis from seeds by reading Congratulations! Your Amaryllis Is Pregnant!

15. Don’t delay too much before planting amaryllis bulbs. They’re so eager to bloom, they often start to send up a flower stalk or even to fully bloom while still inside the packaging they’re sold in … and the results aren’t pretty! If you see an unplanted bulb with a flower bud starting to show, plant it straightaway.

16. Amaryllis bulbs are long-lived. One has been recorded to have lived on one family’s windowsill for 75 years! After they bloom, you simply need to grow them in very bright light (preferably full sun) and water and fertilize them regularly to keep them alive and thriving. Then a period in a cool, dark place for two months without water helps encourage them to rebloom. For more on getting your amaryllis to rebloom, read How to Get an Amaryllis to Rebloom.

17. All parts of the amaryllis are poisonous, containing a wide range of often unique alkaloids, although it is only dangerous if eaten in large quantities. Like many toxic plants, it also has medicinal uses. Studies are notably being done on using it to treat Alzheimer’s disease.

18. Amaryllis should be planted with the top third of the bulb exposed. That’s the standard recommendation. But have you ever wondered why? Especially since the bulb grows completely underground in the wild. It’s simply to give room for the roots to grow. If you completely buried such a big bulb in a pot, there’d be no space for its roots!

19. The amaryllis is the international symbol of organizations associated with Huntingdon’s disease, a genetic degenerative disease of the nervous system. Many of these organizations have a fall amaryllis campaign to finance research into the disease. You can purchase bulbs by mail through your country’s organization. In the US, you can buy bulbs through the Huntingdon’s Disease Society of America, in Canada, go to the Huntingdon Society of Canada while in the United Kingdom, the Huntngton’s Disease Association offers bulbs in association with Marshall’s.

20. In the language of flowers, the amaryllis represents strength and determination because of their height and sturdiness

To learn more about how to grow a amaryllis, including how to pot up a bulb you’ve just bought, read It’s Amaryllis Time!

9 comments on “20 Fun Facts About The Amaryllis”