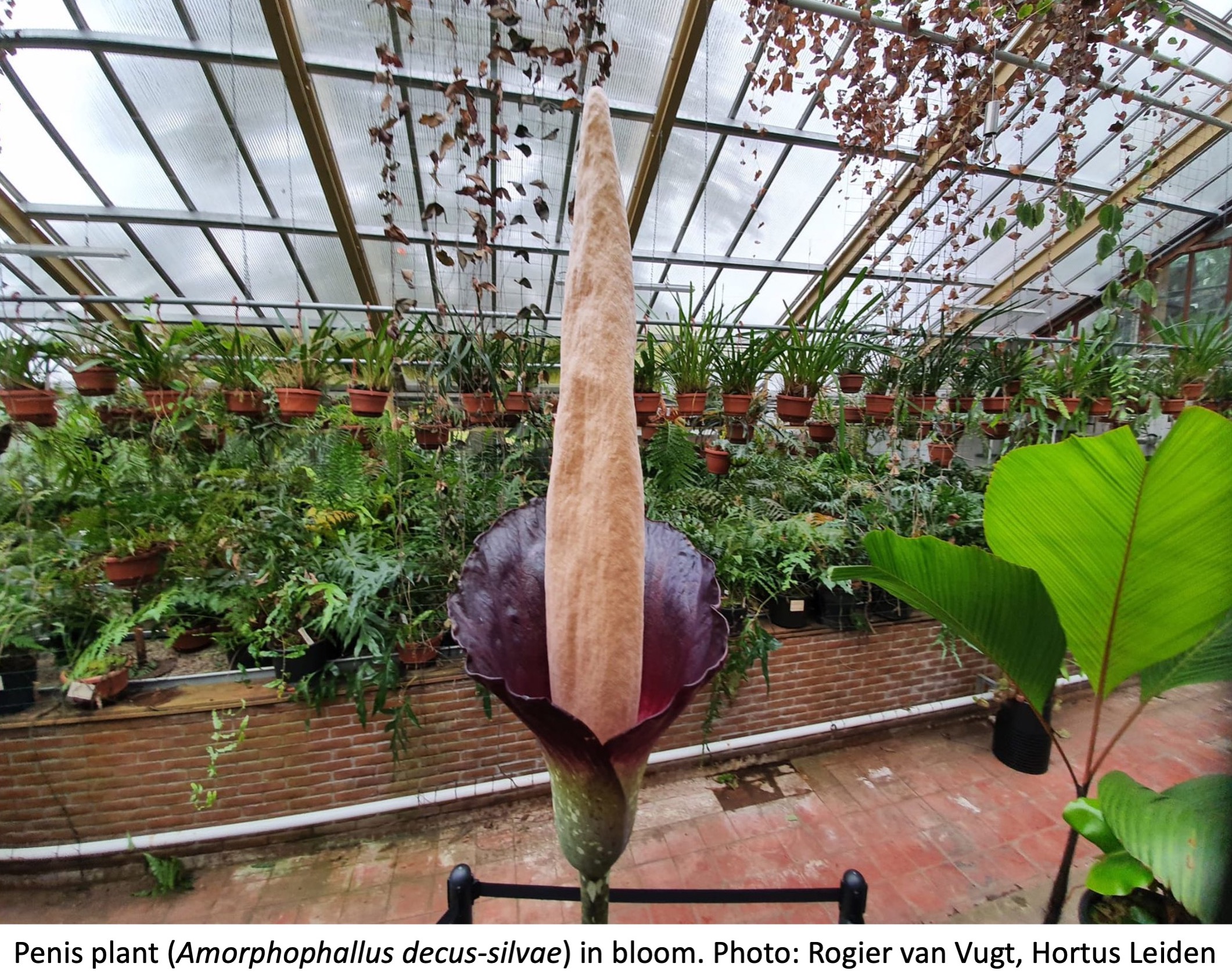 Yes, a very rare penis plant has just finished blooming at the Botanical Garden in Leiden (Hortus Botanicus Leiden), the Netherlands. Amorphophallus decus-silvae is called the penis plant because of the stiffly erect somewhat phallic spadix (pollen column) that arises from the deep purple collar (spathe) surrounding the base of the bloom. Or possibly because of its nauseating smell (I’m going any further into that subject). Or maybe because its botanical name says so: Amorphophallus, after all, means shapeless penis.

The penis plant is a close relative of the slightly larger titan arum (A. titanum), also called the corpse flower because it smells like a dead, rotting animal body. But so does the penis plant flower!

And it’s too late to buy that plane ticket to Leiden: the show is already over. It lasted from October 19 to 20, 2021, although the collapsing flower stalk was still visible a few days longer. Yes, although it may take the penis plant 10 to 12 years to bloom for the first time, once it does, the bloom lasts barely 48 hours. The one in Leiden, already an established plant when the garden obtained it, has been growing there for 6 years.

The day the giant flower opens (it measures about 2 m [6 ½ feet] in height!), only the female flowers, hidden at the base of the inflorescence, are fertile. The white, phallus-shaped part of the flower above then emits a terrible stench, like rotting meat. And gives off heat, up to about 36˚C, so that the odor can spread more widely. In the plant’s native environment, the forests of Indonesia, this awful odor helps to attract the flower’s main pollinator, carrion flies.

By the second day, the female flowers will have closed and can no longer be pollinated, but the male flowers just above now produce copious amounts of fertile pollen grains that rain down and coat the flies. But the odor soon fades, and the confused insects realize there is actually no rotten meat to be found. So, they fly off and, with a little luck (for the plant, at least), find a new penis plant just starting to stink up the air with a fresh bloom, then, as they visit it, accidentally pollinate its female flowers with the dusting of pollen they received. Then, over the following months, bright red berries will form containing the seeds of a new generation.

Well, that’s how things work in the wild. At Leiden, the poor plant was the only one of its species to bloom in Europe that year (indeed, only two other specimens have ever bloomed in Europe), so no pollen was ever transferred. Therefore, it looks like the plant wasted its energy, blooming for nothing. And it won’t likely bloom again for another 3 to 10 years, as blooming uses up almost all of the energy it stores in its underground corm (bulb).

However, maybe Leiden’s penis flower didn’t bloom in vain after all. Employees at the garden collected and froze pollen that can be shared with other gardens if and when their own penis plant blooms. When this happens, botanists, most of whom would undoubtedly prefer not to be confused with carrion flies, will carry out the stinky work of pollination.

The Flies Missed Out

No actual flies were attracted, as the botanical garden authorities weren’t interested in opening the greenhouses to let them in. Instead, what were attracted were thousands of human visitors, who came to see this unusual plant. Apparently, most visitors were women. I can’t help but wonder…

So, for the next decade or so, the Leiden Botanical Garden penis plant will only produce foliage. Every spring, it will give birth to one giant, deeply cut leaf with a marbled petiole much like a trunk that will stand tall and proud from spring through summer. This will allow the corm, which lost most of its size and weight when it bloomed, to store up energy and rebuild its forces. The leaf will then die back in the winter as the plant goes through its dormant phase. And next spring, it will start all over.

Until, one day, when the corm has regained its full size and, chock full of energy, the penis plant blooms again.

Can You Grow Your Own Penis Plant?

Or indoors, as it makes an attractive and curious houseplant as well. You’ll just need a big pot to hold the large corm which can reach 10 inches (25 cm) in diameter at blooming size.

And you can call the devil’s tongue a penis plant if you would like; after all, it is an Amorphophallus (shapeless penis), right?

Devil’s tongue corms are quite widely available in the spring among the usual tender bulbs, if not always in local stores, at least online. And the plant is easy enough to grow. Almost any soil will do, although rich soil will help stimulate earlier bloom. Place it in partial shade (full sun indoors, if possible) and water and fertilize like any other garden plant. Indoors, when the foliage dies back in the fall, keep it dry and on the cool side.

It will produce a huge new leaf each year, then go dormant in fall, and as it does so, its corm will become larger and larger. Then one day, after 3 to 7 years, a huge stinky bloom will appear, and then you can call your neighbors and friends over to admire and smell your stinky penis plant!