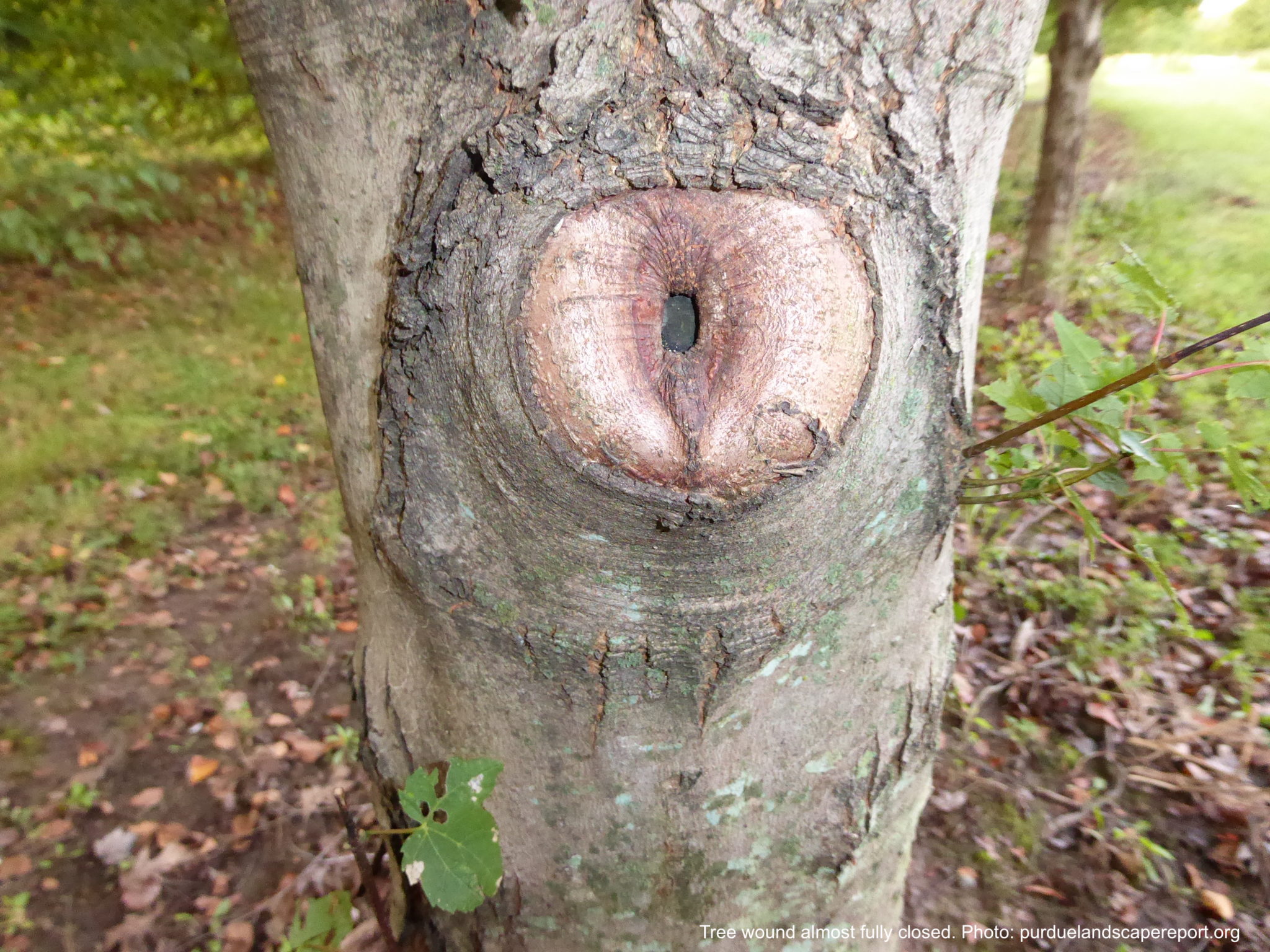 When a tree loses a branch, usually the wound covers over with fresh bark and gardeners usually figure it has healed. After all, when a human is injured—say, a broken bone—, new cells replace the damaged cells and recovery is complete. But that’s not the case with trees.

The wound will close over, true enough, but under the scar, the damaged cells simply die and are never replaced. Instead, when all goes well, the cells around the wound emit chemicals designed to prevent rot in the exposed wood while new cells cover the wound. The wound has not healed, though: it is simply isolated.

This is called “compartmentalization”: the tree “isolates” dead cells prone to disease or insect infestations. But this injury remains a weak point for the rest of the life of the tree and there is always a risk of infection (particularly by rot) even decades later. Hollow trees are simply trees where compartmentalization did not do its job.

What does this change in life of a home gardener? Learn simply that it is better to prune trees as little as possible. And when you do have to remove a branch (and that certainly happens), it is better to do it when the branch is young, because the wound will be smaller and will compartmentalize more readily and rapidly.

Also, cut the branch just beyond the collar at its base (the raised bark that surrounds the base of the limb): this is where there the greatest concentration of insulating cells is found and if you cut just beyond it, the wound will be covered faster.

Avoid leaving a distinct stub: the tree will have a hard time covering it, allowing easy passage to insects and diseases.

And don’t paint over the wound with sealing paint or paste either. This old-fashioned product was once thought to help protect from rot, but we now know it does exactly the opposite and encourages it, actually inhibiting healing by trapping and protecting harmful organisms. If a branch tears off, do cut back to even the wound and leave as small and as smooth a surface as possible, but put nothing on the lesion. Instead, trust Mother Nature: she knows what to do!

Especially avoid self-taught tree trimmers who offer “top” your tree (cut back all its branches). They simply shorten all the branches without paying any attention to where they cut, leaving stubs on every branch. They are charlatans who know nothing about trees. Most trees so trimmed will suffer greatly from such an attack, taking years to recover. Many will in fact die, although this can take a few years. When you need to have a tree pruned, look for a certified arborist or, failing that, at least ask the trimmer what they know about compartmentalization!

Text based on an article originally published in this blog on November 26, 2014.

2 comments on “Tree Wounds Compartimentalize Rather Than Heal”