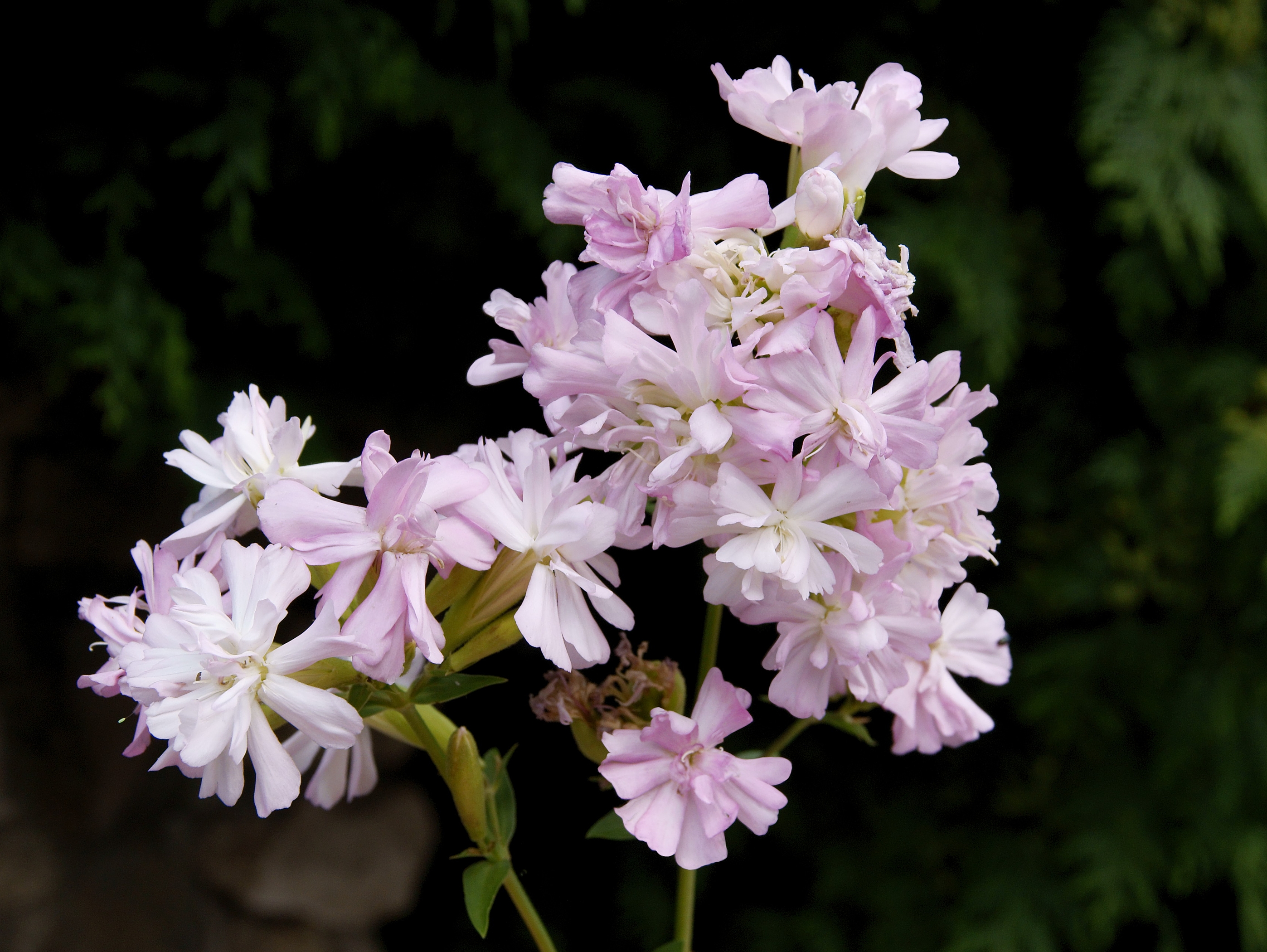 Question: There is a beautiful plant that comes back every year in my garden and in gardens throughout my neighborhood, but which I have never seen elsewhere. It blooms all summer and I always pick plenty of stems to make bouquets for our home. I would appreciate it if you could identify this plant for me. And I think you should present it to your other readers: it’s truly a great garden plant!

Answer: I know this plant well: my great-aunt’s garden used to be full of it!

It’s a bouncing-bet or common soapwort (Saponaria officinalis), a plant in the carnation family (Caryophyllaceae). Yours is more specifically the double-flowered form of the plant, S. officinalis ‘Rosea Plena’.

It’s an old-fashioned garden flower, very popular at the turn of the 20th century, but rarely cultivated today. You often find it in older neighborhoods, a legacy of long-gone cut flower gardens. It may seem amazing that it’s still around such a long time, but then, those old-fashioned plants were generally very tough ones!

Bouncing-bet is indeed a perennial. It reaches about 16 to 32 inches (40 to 80 cm) in height with narrow three-veined sessile leaves. It’s beautiful and very floriferous, blooming from May or June to September or even October. Also, the flowers are strongly and heavenly scented with a clovelike perfume. And as you discovered, it makes a great cut flower you can harvest abundantly, as bouncing-bet always bounces back. The flowers open in the evening and each lasts for three days, but is then replaced by others, ensuring continuous bloom.

The plant is very rich in saponins, from the Latin word sapo for soap, chemicals that give it a soapy, bitter taste. Although the plant is used in small quantities in some recipes (tahini, halva, beer, etc.) and also as a medicinal plant, it is, strictly speaking, somewhat poisonous. But the main attribute of its saponins is that they make a great soap substitute. By crushing a bouncing-bett’s leaves and stems or, better yet, its roots in water and agitating it, you’ll produce plenty of foamy lather that was long used in washing. Most of its names, from the botanical one Saponaria to common ones like soapwort and soapweed, refer to its soapy habit. Indeed, even bouncing-bet, the old name for a washerwoman, comes from its washing ability.

It doesn’t take much to please this plant. In fact, it thrives on neglect. Full sun is best, but partial shade will do and any well-drained soil, whether rich or poor, acid or alkaline, is good enough. And why waste fertilizer on a plant that patently doesn’t need it? It will grow in almost any temperate climate, from mild to very cold (hardiness zones 3 to 9), but not in the tropics, as it does require at least a few weeks of cold during the winter.

Bouncing-bet is generally true to type from seed and also easy to grow from seed, so is usually propagated that way. However, division is obviously also possible.

In addition to the double pink flowered form ‘Rosea Plena’, bouncing-bet offers varieties with single pink or white flowers and double white ones. The double pink cultivar ‘Rosea Plena’, however, remains the variety most commonly offered in nurseries. The single ones are good food plants for sphinx moths.

The plant is “available.” Not all nurseries carry it, but ten to one there is a least one that does somewhere near you. Look for it especially in nurseries specializing in old-fashioned flowers or flowers for cut flower gardens.

However, bouncing-bet does have a flaw: it has proved to be invasive, both by its rhizomes and its ability to reseed abundantly. While native to most of temperate Eurasia, it has been found as a garden escapee in many parts of North America, especially along roads. It would be wise to stop this plant in its tracks by planting it inside a barrier of some sort, like a pot with the bottom removed, in order to block its wandering rhizomes. And a good mulch will prevent it from reseeding.

Hopefully, this article has helped you put a name on an attractive but often forgotten traditional garden perennial.

3 comments on “Rediscovering a Forgotten Perennial”