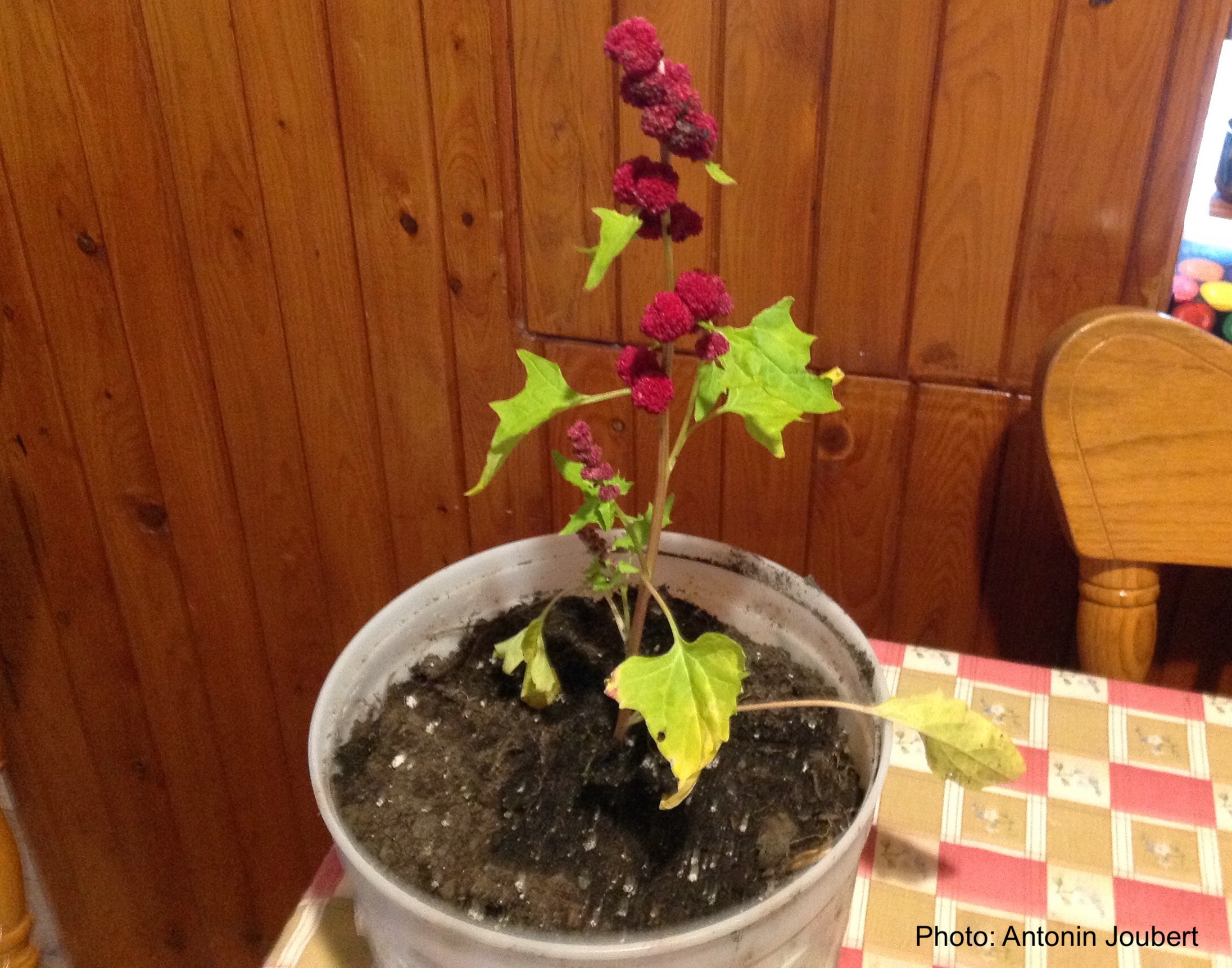 Question: I found this strange plant growing in my vegetable garden. It doesn’t look like anything I know and I’m pretty sure I didn’t plant it. I’ve dug it up to bring it indoors for the winter.

Answer: It’s Blitum capitatum, formerly Chenopodium capitatum, commonly called strawberry spinach or one of several other names: strawberry blite, blite goosefoot, strawberry goosefoot, etc. It’s both a vegetable and an ornamental, cultivated for its edible, decorative clusters of red berries and its edible leaves, but it has never been more than modestly popular and is a rather rare plant in modern gardens.

Bringing the plant indoors for the winter as you did won’t help it in any way: it’s an annual and dies at the end of the growing season. Instead, the way to save it is to collect seed from your plant to sow next spring.

The common name strawberry spinach comes, on the one hand, from the plant’s kinship with spinach (Spinacia oleracea)—both belonging to the Amaranthaceae family; formerly the Chenopodiaceae family—and from the fact that the leaves have a similar sweet-sour taste. As for “strawberry,” that’s even most obvious: the densely clustered red berries do look a bit like strawberries (Fragaria spp.). Many people find the sweet berries taste rather like strawberries too, but I must admit that, to me, they taste more like beets (beetroots), but without the earthy aftertaste.

Your plant may have escaped from a nearby vegetable patch, as strawberry spinach self-sows quite readily: birds and small animals eat the fruit and drop the seeds here and there. As a result, this North American native has managed to naturalize in several places outside its original range, as it is now found in most countries of Europe as well as in New Zealand and Asia. However, your plant needn’t be a garden escapee, because the plant occurs naturally throughout the northern USA and Canada, including Quebec.

Strawberry spinach is a small, upright, sparsely branched plant 8 to 20 in (20 to 50 cm) high with hastate (arrow-shaped, with two spreading lobes at the base) leaves. The leaves can be eaten raw or cooked, preferably when they are still young and tender. The more you harvest, the more will be produced. The tiny flowers, initially green, then pinker and pinker, are clustered tightly in the leaf axils and also appear on the plant’s terminal spike. The fruits are purplish red to deep red when they reach maturity between July or August and October.

It should be noted that this plant, although edible, contains oxalic acid and saponins, two products which are toxic if consumed in large quantities. You should therefore only eat the leaves in moderation (no more than a cup a day). As for the fruits, moderation is also wise if you eat them raw, but in their case, the toxic parts are concentrated in the seeds and if you run the cooked fruits through a sieve to remove the seeds, you can avoid this problem. That way you can produce delicious syrups, jellies and jams that can be consumed without restriction.

Native Americans once used it as a red or pink dye too and is some areas it’s known as Indian paint or Indian pink.

Strawberry spinach is easy to grow from seed and seed packs are quite widely available, especially from sources supplying heritage vegetables. No need to start the seeds indoors; just sow them in the ground or in pots after the soil has warmed up a bit, covering them with 3/16 in (5 mm) of soil. Germination takes about 3 weeks. Alternatively, you can also sow them in the fall for germination the following spring.

Prefer a location in full sun with well-drained soil. However, it’s a tougher plant than most vegetables and will get along fine in poorer soils. In fact, the plant is quite tolerant of neglect in general, certainly more than most vegetables, and therefore makes an excellent choice for the laidback vegetable gardener.

The only maintenance needed during the summer is weeding if competing plants really start to take over or, in times of severe drought, watering. If you don’t want the plant to self-sow, be sure to harvest all the fruits in late fall. If you do want it to self-sow, do the opposite and let a plant or two go to seed.

3 comments on “What Is This Strange Plant?”