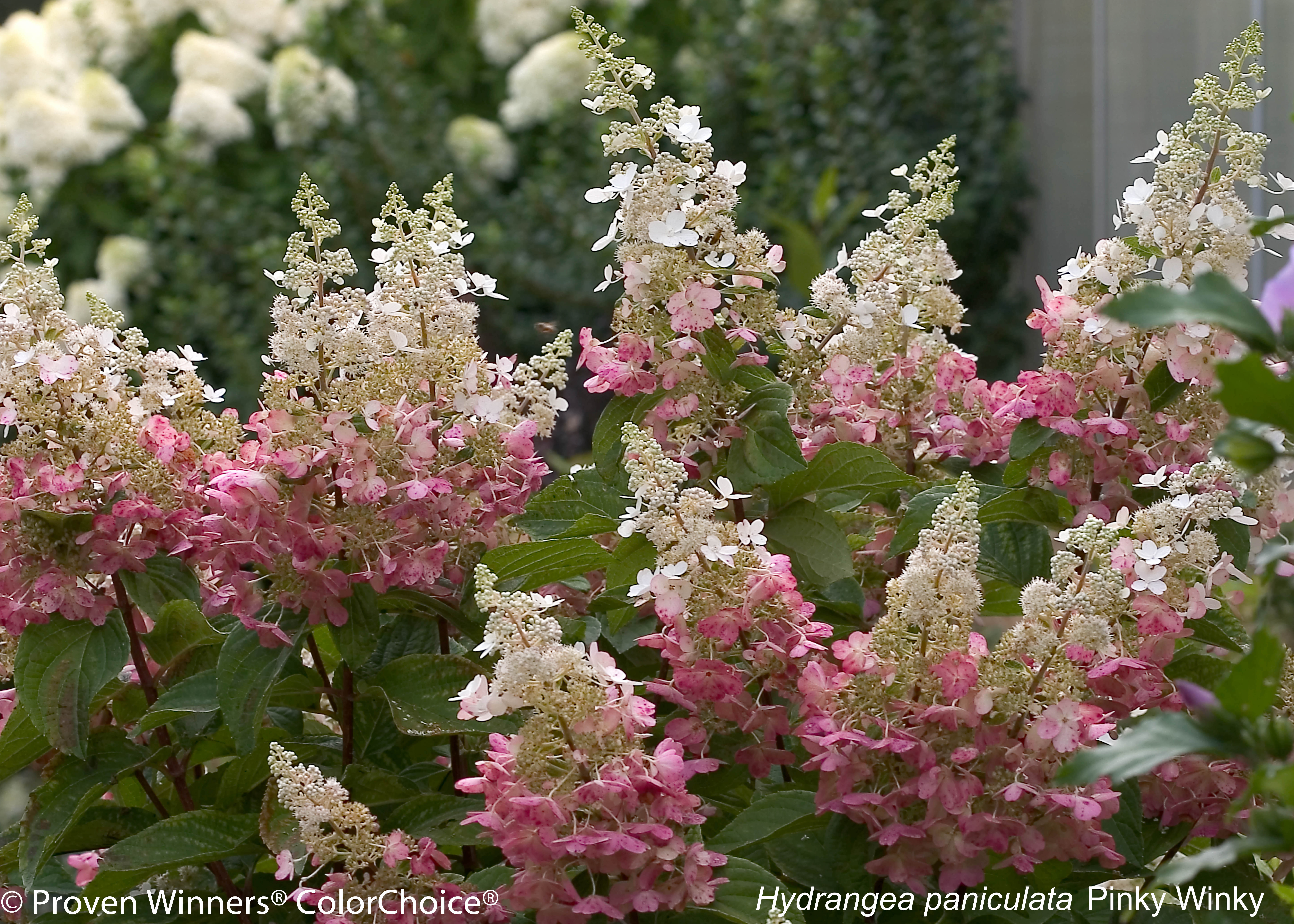 Its name may make you smile, but its effect in the garden is amazing.

Panicle hydrangea (Hydrangea paniculata) is nothing new: it has been grown since the 1860s … well, at least the cultivar ‘Grandiflora’ has. This is the famous Peegee hydrangea (peegee for paniculata ‘Grandiflora’) of horticulturists, known all over the temperate world. Over the past two decades, however, the market has been inundated with dozens of new contenders for the title of best hydrangea for temperate gardens. All of these cultivars are very good, several are excellent, but let me suggest that perhaps the best is H. paniculata ‘DVPpinky’, sold under the trade name Pinky Winky™.

This hybrid (the name is derived from the Teletubbie Tinky Winky, the favorite character of the son of the Belgian hybridizer, Johan Van Huylenbroeck), is more compact than Peegee, but still a good size: about 6 to 10 feet (1.8 to 3 m). However, it can be kept indefinitely at 5 feet (1.5 m) by cutting it back annually to 6 in (15 cm) from the ground in the spring. Since it blooms on new wood (stems produced in the spring of the year), that won’t prevent the plant from blooming abundantly.

The reddish stems are more robust than those of the Peegee hydrangea: the plant remains quite upright, with a somewhat flaring habit, instead of almost bending down to the ground when it’s in bloom like Peegee can. The lightly toothed green foliage has little special appeal, forming just a green mass…, but the spectacular bloom more than makes up for a rather bland beginning to the season.

Pinky Winky begins to flower almost a month earlier than P.G., at the end of July. It forms an elongated panicle made up of fairly large and showy sterile flowers with a lesser number of tiny fertile flowers. The flowers are greenish white at first, then gradually change color until snowfall, alternately turning pure white, pink, purplish pink and red.

The most striking feature of Pinky Winky is that its inflorescence is indeterminate, a trait hitherto unknown in hydrangeas. This means that the panicle continues to elongate throughout the growing season, sometimes reaching up to 16 inches (40 cm) in length. So, while the older florets at the bottom of the panicle have turned almost red in the fall, at the top end there are still fresh white flowers.

Pinky Winky is normally a shrub, but it is also sold trained into a tree form through pruning: a “tree hydrangea” or “hydrangea tree.” The nurseryman simply prunes a young Pinky Winky shrub, removing all but one branch that now acts as a trunk, gives it a pinch to stimulate branching near the top and doubles the price. That can give a single-trunked “tree” with branches starting from 30 inches to 6 feet (75 to 180 cm) above the ground, depending on the branch’s height when pruning began.

Panicle hydrangea is renowned for being easy to grow and Pinky Winky is certainly no exception. It tolerates almost all soils, from acidic to slightly alkaline, provided the drainage is good. Once well established, is very drought tolerant. Full sun is best, but Pinky Winky grows well (although it flowers somewhat less) in partial shade. No winter protection is necessary, except for tree hydrangeas. They may require staking the first 2 or 3 winters in areas of heavy snowfall, until their trunk lignifies fully.

No pruning is absolutely necessary either, but you can prune a Pinky Winky if you want to, either to control its height or to remove faded flowers. Ideally, this is carried out in the spring, after snow melt, so you can enjoy the delightful winter effect of plant’s dried flowers. They look especially wonderful against a background of snow!

The panicles also make excellent fresh or dried cut flowers, so you might want to snip off a few for winter decoration.

With its long-lasting color from July to late fall and dimensions large enough to make a real impact, Pinky Winky hydrangea makes a great choice for a starring role in the landscape. It also works well as the background for a flower bed or as a free hedge. To compensate for its lack of color at the start of the season, you might find it helpful to surround it with spring-flowering bulbs (tulips, narcissus, etc.) as well as perennials that bloom in early summer, such as columbine (Aquilegia spp.), bellflowers (Campanula spp.) and painted daisy (Tanacetum coccineum).

Pinky Winky in a Nutshell