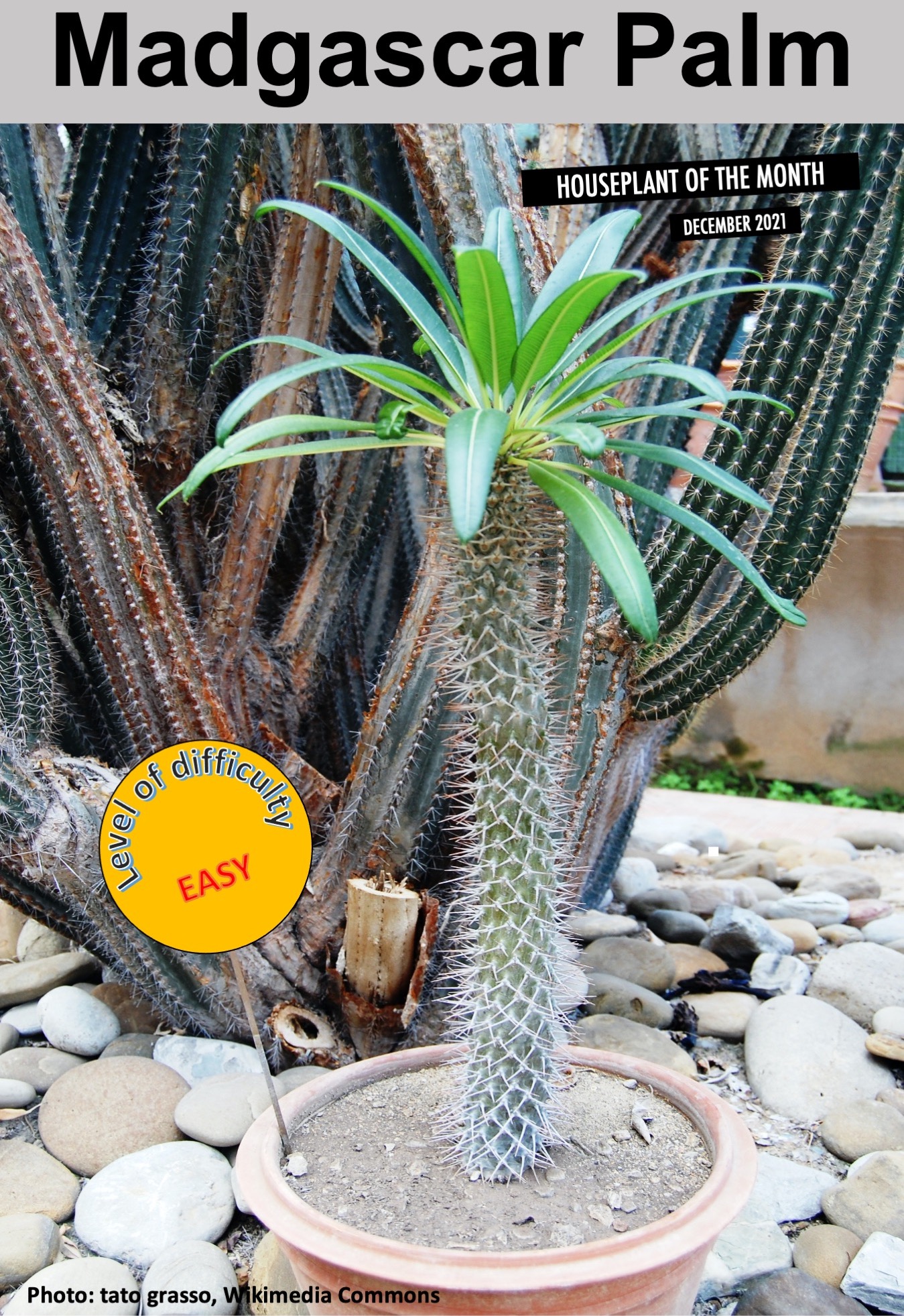 This popular indoor succulent (Pachypodium lamerei) isn’t a palm (Arecaceae), of course, and I personally don’t think it even looks like a palm, other that it has a straight trunk topped with a circle of leaves. But palms have fronds with pinnate or fan-shaped fronds, not lance-shaped entire leaves like this plant bears. So, to me, it’s clearly not a palm … but a lot of people obviously see things differently.

This plant actually belongs to the dogbane family (Apocynaceae) along with such plants as oleanders (Nerium oleander), plumerias (Plumeria spp.), periwinkles (Vinca spp.) and milkweeds (Asclepias spp.). And, like most of its relatives, it is poisonous, although with spines like those that cover its trunk, neither humans nor pets ever tend to get close enough to eat anything. You or pet would be more likely to cause yourselves damage by accidentally stabbing yourselves on a spine than through poisoning. For that reason, do keep this plant out of the reach of boisterous pets and curious children.

What the common name Madagascar palm did get right is that this plant is indeed from Madagascar, that huge island off the coast of Africa. Most of the 25 species of pachypodium are found on that island, growing in arid environments, especially the island’s famous spiny forest, where almost every plant looks murderously thorny. Like the Madagascar palm!

Some pachypodiums, like P. lamerei, form small trees—up to 20 ft (6 m) tall outdoors, but rarely much more than 6 ft (1.8 m) indoors—, but others are shrubs and yet others have ground-hugging or mostly underground stems.

This plant is considered a pachycaul, a term that refers to a tree or shrub with an unusually thick-stemmed trunk, often bottle shaped and unbranched or sparingly branched. Indeed, the name Pachypodium means “fat foot,” as this species (and others) sometimes takes on a bulbous shape over time. (The species name, lamerei, was given by the French botanist Emmanuel Drake. It’s an honorific, derived from the family name La Mère, but no one seems to remember exactly who the name is supposed to honor.)

P. lamerei stores water in tissues in its trunk in order to survive the long periods of drought of its native land, often 7 months and longer. Its spines obviously have a protective purpose, detering predators, but also serve to trap fog and dew, supplying the plant with extra humidity in an environment where every little drop is a blessing.

When you buy your Madagascar palm, it will likely be unbranched. It’s usually only after many years of growth that it begins to branch at the top unless you provoke branching (read more about that under Pruning below) … and that is also when it begins to flower, producing clusters of stunning, deliciously scented white flowers with a yellow center that will certainly remind you of plumeria blooms.

Although the Madagascar palm is often said to bloom rarely indoors, I have to disagree. It’s just that it takes so long to do so: 10, 15 years, maybe many more. Outdoors in a suitably warm climate, it will bloom at a much younger age, but then conditions there are ideal. They aren’t indoors, so the plant takes its time. This is not a plant in a hurry!

If you look carefully at the bark at the base of the spines, you’ll notice it seems smooth and silvery. It has a greenish tinge and carries out photosynthesis, just like the leaves. So, the plant can still photosynthesize even when the leaves are absent … and they often are.

In nature, the Madagascar palm loses its leaves annually with the arrival of the dry season (it may at that season be mistaken for a cactus!), then grows new leaves with the return of moister weather. Indoors, plants seem to vary considerably. Some lose all their leaves, others lose some seasonally but also hang on to a few, and yet still others bear a full crown of foliage all year. You’ll even find mature, branching plants with some branches that are bare and others that are still leafy! Cooler temperatures and reduced watering in winter can induce full dormancy and thus leaf loss; year-round warmth and watering encourage the plant to hold on to at least some leaves.

P. lamerei is actually quite variable the wild, with plants in some areas forming single trunks while others develop clumps, with spines of various lengths, with a naturally treelike or shrublike silhouette, with a bottle-shaped or straight lower trunk, etc. and you may be able to find such varieties through specialist nurseries. The classic indoor Madagascar palm as most often found in garden centers, though, has a single straight trunk, at least in its youth, and spines about 2 ½ in (6.25 cm) long.

There is also crested variety (P. lamerei cristata is one name used for it) where the growing point is curiously flattened and the plant grows in odd shapes similar to a rooster’s crest. Expect to pay quite a bit for a specimen: it’s quite the collector’s item! It needs careful attention to watering to prevent rot, as it is not as tough as the species.

You can also grow other species of Pachypodium, some quite similar in habit to Madagascar palm, others very different. Most of these are protected in the wild and permits are needed for their exportation, although seed-grown specimens of many of them are not unavailable. The ones with small leaves and a short, very thick stem called a caudex tend to be dependent on a distinct summer growing season with reasonable watering followed by a very dry winter dormancy. Care for them in consequence of that need.

Caring for a Madagascar Palm

There is no doubt why the Madagascar palm is so popular: it really is easy to grow, more tolerant of irregular care and neglect than many houseplants and, indeed, many other succulents. It will survive pretty much any care you give it, but still, it does have its preferences.

That also applies to tropical climates where it can be grown in the open: the Madagascar palm seems to grow equally well not only in the arid climates one would expect, but in fairly moist ones and even ones with winter rains. Just make sure it has good drainage, lots of sun and is protected from all but the lightest frost. But since the subject here is how to grow this plant as an indoor plant, let’s look further into that …

Light: Intense light with as much sun as you can supply, such as near a large south-facing window, it is ideal and can result in rapid, symmetrical growth: up to 1 foot (30 cm) per year if other conditions are met. Nevertheless, it does remarkably well in moderate light, although growth can be slow. Such plants have thinner stems and rarely fill out as they mature. Also, under lower light, the plant likely won’t be as symmetrical as in full sun: do give it a quarter turn every few weeks so all its sides receive equal lighting.

Watering: Drench and let dry: always the secret with succulents. This works wonderfully with the Madagascar palm. So, water until the potting mix can hold no more. Do not just give a few spoonfuls of water at a time: that will leave it permanently drought-stressed. Think “when it rains, it pours” and you’ll get it!

Perfect drainage is a must, though. Plants left soaking in water will rot, so empty the plant’s saucer if any water remains.

You can water your Madagascar palm pretty much like any houseplant during the spring and summer, just as the soil starts to dry out. How frequently? That will depend on conditions. Maybe every week or so. Again, is the soil dry? Then water. Is it moist? Don’t.

During the winter, though, do let it dry out much more than that, especially if temperatures are cool. Even once the soil is clearly dry to the touch, wait at least a week before watering. Loss of leaves at that season is a good thing, a sign the plant is following its normal rhythm. You can increase the watering again as spring arrives and fresh new growth starts to appear at the top of the plant.

The stress of going through a long, dry winter every year will help encourage it to develop over time a fattened, bulbous lower trunk, considered highly desirable.

Atmospheric Humidity: P. lamerei adapts perfecting to normal indoor humidity levels. Just don’t put into a terrarium or other closed container where humidity is bound to be excessive.

Fertilizer: Sure, why not! At no more than a quarter of the recommended rate, though, and only in spring and summer. If you intend to repot every two or three years, you could skip the fertilizer, as that would supply enough minerals to meet its needs.

Temperature: Coming as it does from an arid climate where temperatures can hover around 100˚F (40˚C) for weeks at a time in the summer, heat won’t bother it. Ideally, though, you’d give it a cool, dry winter, but not much cooler than 55˚F (13˚C) if possible. It will tolerate short periods below freezing, though damage can occur … but why would you keep your house that cold? When you do keep temperatures cool, the soil must dry out thoroughly between waterings or rot could set in.

Grooming: Leaves come, leaves go and, in this case, quickly turn yellow, then black. Remove them.

Pruning: If you’re tired of this plant’s strictly upright appearance and the years go by with no change to that habit, put on thick gloves and clip off the growing point as best you can to stimulate branching. Or even slice off the top of the plant. That will force the trunk to produce one to several branches and may also (eventually) stimulate bloom.

Note this is one of the rare plants in the Apocynaceae family that has clear sap instead of sticky white latex.

Repotting: Placing your plant in larger and larger pots every 2 to 3 years will give best growth, but if you want to slow it down, stop repotting.

This plant, with its tall, thick, water-filled trunk, becomes very heavy and you may need to repot into a larger, heavier pot just to hold it upright.

Repot in spring or early summer if possible, into a well-drained growing mix. Yes, that can be cactus soil, but even regular potting mix is fine. There must be drainage holes.

Multiplication: Usually, you simply don’t multiply this plant. You buy it as a seedling or a more mature specimen, then just let it grow. And most people are fine with just one. However, it’s not that difficult to propagate.

Problems: Rot, usually starting at the base of the plant, leaving soggy, brown tissue smelling like a rotten potato, is really the only common problem and it’s most likely to occur under either low light or if you keep the soil too moist during cold weather. If you notice signs of rot lower down on the plant, like a suspicious brown patch that is soft to the touch, you can try to save any healthy growth above by taking a tip cutting, as explained above. Don’t delay: rot can spread very quickly.

Insect problems are possible, especially stem mealybugs, soil mealybugs and scale insects, but fairly rare and can often be treated with repeat applications of insecticidal soap.

The Madagascar palm: a spiny but not unattractive indoor tree that might just become the star of your houseplant collection!

5 comments on “Madagascar Palm: The December 2021 Houseplant of the Month”