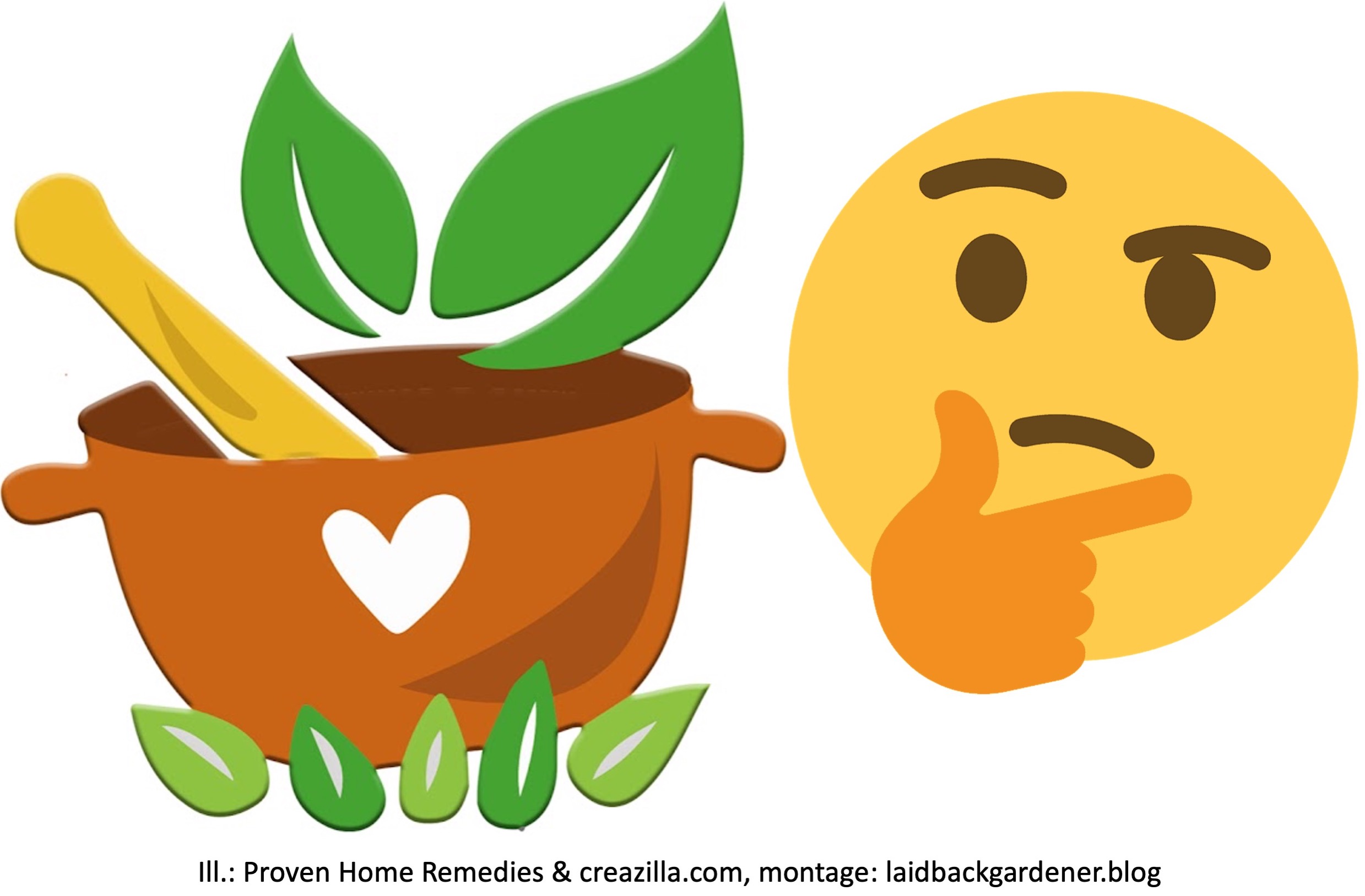 Hardly a day goes by when someone doesn’t send me a message up about some sort of home remedy for a gardening problem, swearing that it works. Or ask me if such a home treatment is really effective.

Usually, I listen politely in the first instance and try to respond to the best of my ability in the second. Whether these remedies work or not, they are generally harmless, at least to the person applying them. So, I don’t necessarily feel the need to burst anyone’s bubble. However, sometimes what I am told is so horrifying that I feel I do have to intervene for the safety of the person involved, their family and their pets.

No One Really Knows

The problem with home remedies is that, in general, no one has confirmed their effectiveness. There is no scientific basis for the belief, so it’s never really sure how effective they are.

To really make certain, you would nee to do a test with a “control plant”: an identical plant on which no treatment was carried out and which can therefore to used to make a comparison. Only then can you get an idea if the treatment really is effective.

Of course, if this test is done just once, it’s still not really confirmed. You have to repeat the experiment on dozens of plants, if not hundreds, and if possible, under very different conditions and on different plants, before you can confirm anything.

How A Made-Up Remedy Spreads

What if I told you, for example, that since I placed my African violet (Saintpaulia spp.) on my microwave oven, it blooms more. And that, therefore, the rays that the oven gives off must stimulate African violets to flower better. This may actually be true … but since I hadn’t confirmed the result on another identical African violet, placed, let’s say, on a counter next to it, receiving exactly the same conditions except the “rays”, I don’t really have any proof that my belief is correct. But I told two of my neighbors about my fabulous results and one of them repeated it on Facebook where Fern Greenfingers, the garden maven and social media influencer, always quick to pick up on anything to do with gardening, true or false, as long it will draw traffic to her site, repeated it in a YouTube video… And, there, just like that, an urban legend (or should I say “horticultural legend”) is born!

But is the fact that I placed a violet in a microwave oven and felt it had produced more flowers proof of anything? It may also be possible that the microwave is closer to the window or the air is more humid there and the new location is causing the difference. Or that, since I use the microwave several times a day and therefore see the violet more often, I notice that it is running low on water more quickly and thus water it more assiduously. Or that the plant was already in bud before I put it on the oven and nature just took its course. Or, or, or … the possibilities are almost endless! But too late: the legend has already been launched and could quite well spread all around the world!

Soap as Insecticide: the Myth that Turned Out to Be True!

But what at first appears to be yet another a horticultural myth sometimes turns out to be true. And the use of soap as an insecticide falls into that category.

Home gardeners have been using soap as an insecticide since at least the end of the 19th century, but for a long time, scientists were more than doubtful that a simple solution of soapy water could be used to kill insects pests. But in the 1950s and 1960s, a few teams of researchers did finally decide to verify the effectiveness of the belief … and thus was born insecticidal soap, a pure natural soap, more effective against insects than commercial dishwashing liquid and much less toxic to plants. Nobody today doubts the effectiveness of insecticidal soap: it has been fully proven.

More Research to Do

The scientific community isn’t always that eager to jump into checking horticultural myths (probably because there are so many of them!), but every now and then, reports do come out about a few homemade treatments that were vetted and some of those have proven to be valid. In other cases, however, the treatment was found to have no beneficial effects. Other treatments have even turned out to be harmful to plants. And in yet other cases, there was some truth to the belief, but also negative aspects that need to be taken into consideration. And in yet others, the treatment did offer a slight positive effect, but so little that it wasn’t worth getting excited about.

Let’s look at some of these “vetted” home remedies here.

The Margarine as a Leaf Shine Product

One common remedy is to rub margarine (or mayonnaise, or motor oil, depending on the source of the legend) onto the leaves of houseplants to make them shine. And it works … at first.

Margarine and the other products either are fats or contain fat, and fats can make foliage shine. The problem is that fats can also clog the plant’s stomata (the pores through which they breathe) and reduce photosynthesis by cutting light and therefore the growth of the plant. They may eventually even kill the leaf so treated. Also, fat is sticky and catches dust, so the plant quickly needs another treatment with margarine (or mayonnaise or…) to remove the accumulated dust brought on by the first treatment and bring back the shine.

As far as I know, neither margarine, mayonnaise, nor motor oil has any real usefulness in horticulture.

The best “leaf shine” for plant leaves is simply to clean them with soapy water to remove dirt and to follow that with a rinse of clean water to remove any soap. That will allow the leaves to show their natural luster.

Cigarettes as a Home Pesticide

According to this belief, you can soak cigarettes (or cigarette butts, or tobacco, depending on who is sharing the information) in water and use the resulting solution to control insects on plants. And it’s absolutely true … but don’t do it!

This is a good example of a case where a home remedy is very dangerous for the user. Yes, tobacco can kill insects because it contains, among other poisons, nicotine. But nicotine in solution is several times more toxic than nicotine in smoke and this concoction could make the person applying it very sick. In fact, in the past nicotine-based insecticides were widely sold (my father always had a bottle of nicotine sulfate on hand at all times back in the 1960s!), but they were withdrawn from the market in most countries following a slew of cases of accidental deaths due to poisoning.

Or orchids. Or pelargoniums. It all depends on who is telling this particular urban legend. You guessed that this one is not true and even if it were true, it would cost a lot less to buy fertilizer to get your plants to bloom more. And the consequences of not taking the prescription for the drug in question could be quite costly too.

Coffee Grounds as a Pesticide

This is obviously a common one, as I often receive messages from people who spread coffee grounds at the base of plants to repel insects, most often to complain it didn’t work. If only it did! And yes, the treatment has proven ineffective on insects that attack leaves, stems and flowers and of very little consequence on soil insects, most of which are harmless or beneficial anyway. Slugs just slide right over coffee grounds, ants move them out of their path. The grounds contain caffeine and other poisonous alkaloids and could therefore be toxic to insects … if there were a way to convince them to eat them. But they don’t. And coffee grounds have no repellent effect, so…

Also, even though coffee grounds might have a slight effectiveness against certain soil insects under certain circumstances, it’s very limited. After a day or so the toxic alkaloids they contain will have broken down into harmless by-products.

Coffee grounds, while useless at controlling pests, are, however, an interesting product to add to the compost bin, because they are rich in minerals.

And no, just to finish up with coffee ground legends, grounds don’t acidify the soil and therefore can’t be used to make soil more acidic for rhododendrons and blueberries. Yet another myth that needs busting!

A Soft Drink Bottle to Keep Groundhogs Away

One legend claims that if you leave a soft drink bottle filled with water on the ground in your garden, the groundhog that’s causing damage it will see itself in the bottle, be frightened thinking that it has seen another larger groundhog, and will flee, never to be seen again. The other explanation sometimes given is that’s the reflection of light on the bottle that scares the mammal away. But field experiments show that groundhogs are not at all bothered by the presence of soft drink bottles, full or empty!

According to this legend, you can mix 1 teaspoons (5 ml) of baking soda in 1 quart (1 liter) of water, adding a few drops of insecticidal soap to make the baking soda adhere better to the foliage, then spray it onto rose leaves to prevent black spot (Diplocarpon rosae). Biweekly sprays, enough to lightly coat the leaves, then repeated from leaf emergence until fall, will be necessary. And this, it turns out, really does work.

In fact, baking soda has been shown to be effective against powdery mildew as well, on several plants. It is now part of the pest control program of many home gardeners.

It is said that a solution of 1 part milk to 9 parts water can prevent powdery mildew on plants. And it seems to be true. This is based on discoveries tested in Brazil at the end of the 20th century. I must admit that, when I first heard that one, I didn’t believe it. I had to read over a few reports to realize it really was a useful treatment. I mean, who would have thought that milk could be an effective pesticide!

Why milk would be useful against a fungus like powdery mildew is not fully understood and, moreover, as of today, the number of plants adequately tested is fairly limited. It’s mostly vegetables that have been looked at at this point. It would take comparative trials on a host of plants before confirming that milk is a good overall fungicide against powdery mildew. However, the technique seems promising. So, for now, go ahead with the treatments on your plants, but make sure to apply it to just one leaf per new plant at first, just to be sure that no damage to the leaf occurs.

And by the way, powdered milk is as effective as whole milk.

Reading This Blog Can Give You a Green Thumb

Many people have told me that, but, unfortunately, it isn’t true. The only way to develop a green thumb is to experiment with plants and learn from both your successes and your failures. Advice from others can always help, true enough, but your real green thumb is between your two ears!