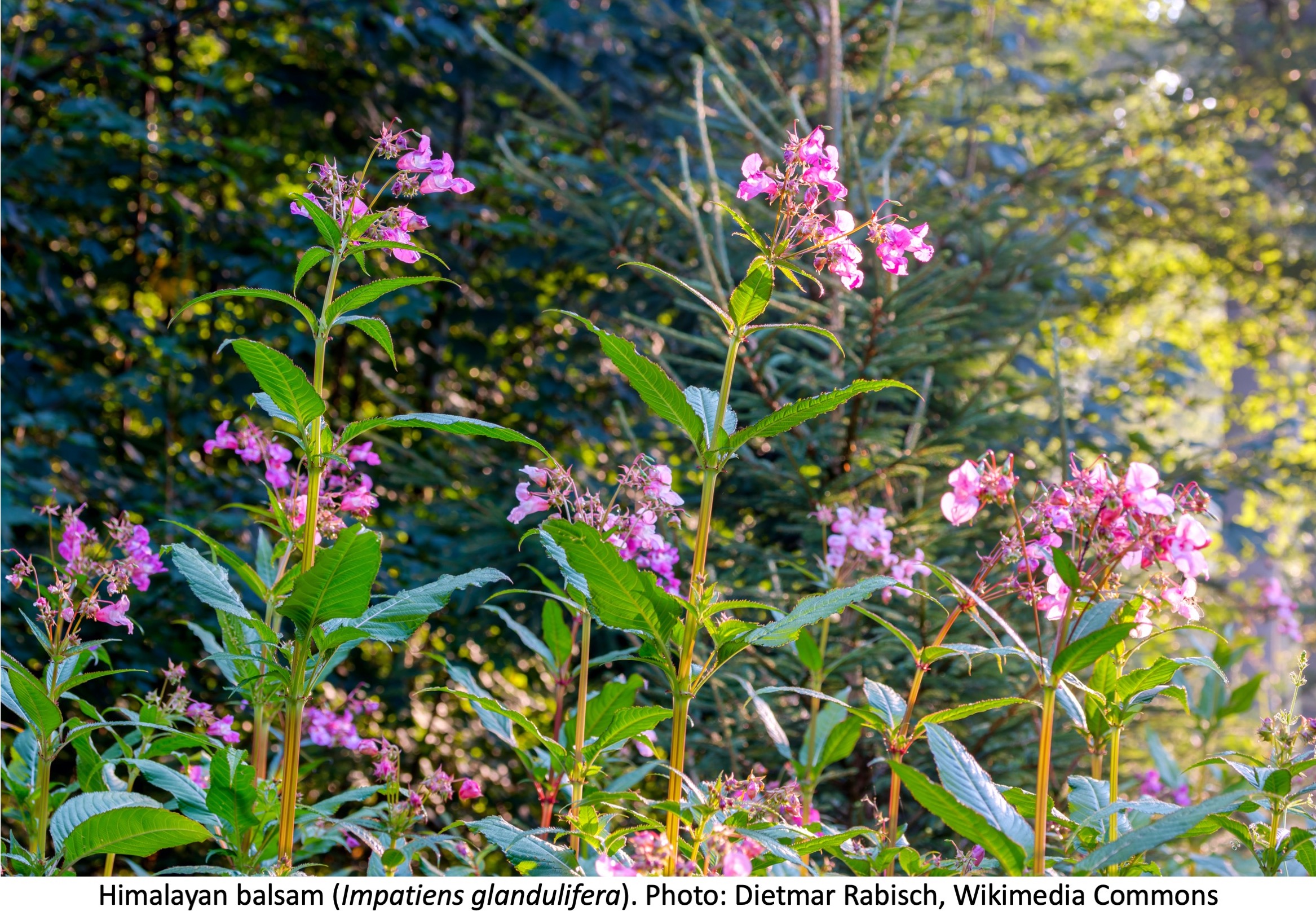 Question: I’m sending you a photo of a very beautiful plant that I would like you to identify for me. I saw it last September at the edge of a forest near Boston, but I can’t find it in my book of New England wildflowers. It’s very tall plant, as tall as my husband (6 ft), with a sturdy, reddish stem. The leaves are long, lightly toothed and usually in groups of three. The flower is pink and resembles that of orange jewelweed. The long seed capsules also resemble those of jewelweed and have the same habit of bursting open when touched, sending the seeds flying everywhere.

I collected some seeds to sow in my garden next summer. Do you have any suggestions on how to grow it?

Answer: You’re a very observant person, because not only did you give an excellent description of the plant, but it is indeed a relative of orange jewelweed (Impatiens capensis). The plant in question is Himalayan balsam (Impatiens glandulifera), also known as policeman’s helmet because of the hatlike shape of the flower.

It’s an annual native to the Himalayas, as the common name suggests. Originally introduced as a garden ornamental, it has escaped from cultivation in many temperate climates, including here and there in the United States, Canada, New Zealand and Japan. I first saw it myself in France and England some 40 years ago, and it seemed to grow everywhere! In fact, it is now widespread throughout almost all of Europe where it’s considered such so seriously invasive that it has been placed on the List of invasive alien species of Union concern. Thus, it is now illegal to grow, transplant or market it anywhere in the European Union and governments there are actively working to eradicate it.

The problem is, this plant self-sows readily in most environments, from dry to moist, sunny to somewhat shady and acid to alkaline. Each plant produces up to 800 seeds a year, giving the plant lots of back-up. In addition, this plant is so tall and grows so densely that it cuts off light to native plants, crowding them out and thus impoverishing the environment. Also, its nectar-rich flowers monopolize pollinators, leaving little for native plants. Finally, its roots, since they have already largely decomposed before winter, leave the soil open to erosion. Therefore, even if Himalayan balsam is very pretty and growing it is still legal where you live, the potential for environmental damage means it’s a plant you’d do best to avoid growing.

I’m therefore going to recommend that you not sow this plant in your garden. I understand that you may feel you’ll be able to keep Himalayan balsam under control and not allow the plant to spread, but it could still become a problem for future generations. After all, you won’t be there forever to ensure weed control and the heirs to your garden won’t necessarily be as reliable as you. In addition, when the seed capsule explodes, it launches seeds up to 15–20 feet (5–6 m) from the mother plant and thus Himalayan balsam can easily leave your property for nearby properties where the residents are not necessarily so attentive.

Especially avoid planting Himalayan balsam near a river or other body of water, as the seeds float and can be carried great distances by the current.

For readers who already have discovered this plant spreading throughout their garden, Himalayan balsam is still relatively easy to eliminate, at least as long as its local distribution is still limited.

First, as mentioned, the plant is an annual and therefore dies in the fall. So, in a sense, the plant self-destructs at the end of the season. However, the species can rely on seeds that have fallen to the ground in the fall to ensure its regeneration. And don’t expect cold winters to kill them. Himalayan balsam was originally an alpine plant and its seeds are very cold hardy. Indeed, they won’t even germinate if they don’t go through a cold period over the winter. But, unlike the seeds of many weedy plants, Himalayan balsam seeds are short-lived. Most only survive until the following spring; just a small proportion for 18 months. So, there’ll be no “natural seed bank” in the soil from which the plant can resprout years later.

So, all you have to do is to pull out the plants in late spring or summer, as soon as you recognize them and certainly before seeds are produced in late summer. (If the seed capsules are already well developed, attempting to control the plant by pulling it out may backfire, stimulating increased seed dispersal!) The root system is surprisingly limited for such a big plant, nor does it grow very deeply, so it’s easy enough to pull out.

You can simply bag the plants you pull out and put them out with the trash, but don’t be afraid to compost them either (as long as the uprooted plants are seedless). Or, let the plants dry out on a tarpaulin or a paved surface so that the roots die. Don’t pile the uprooted plants on damp soil, however, as there is a risk that some of the stems may root into the ground, then come back to life and flower.

If pulling usually works well, trying to control the plant by cutting it back the plant is not necessarily very effective. That’s because, unless you cut it right back to the ground, under the lowest node, it can grow back from the base. That may still allow it to grow back, flower and produce seeds.

If you pulled out all the plants the first year, there won’t be much mopping up to do the second one. Just a plant or two from the few seeds that managed to survive 18 months. Go through your garden and pull those out … and you’ve won the battle!

The Himalayan balsam: it’s beautiful, but too dangerously invasive to be a choice garden plant.

4 comments on “A Beautiful Wildflower That Can Become A Menace ”