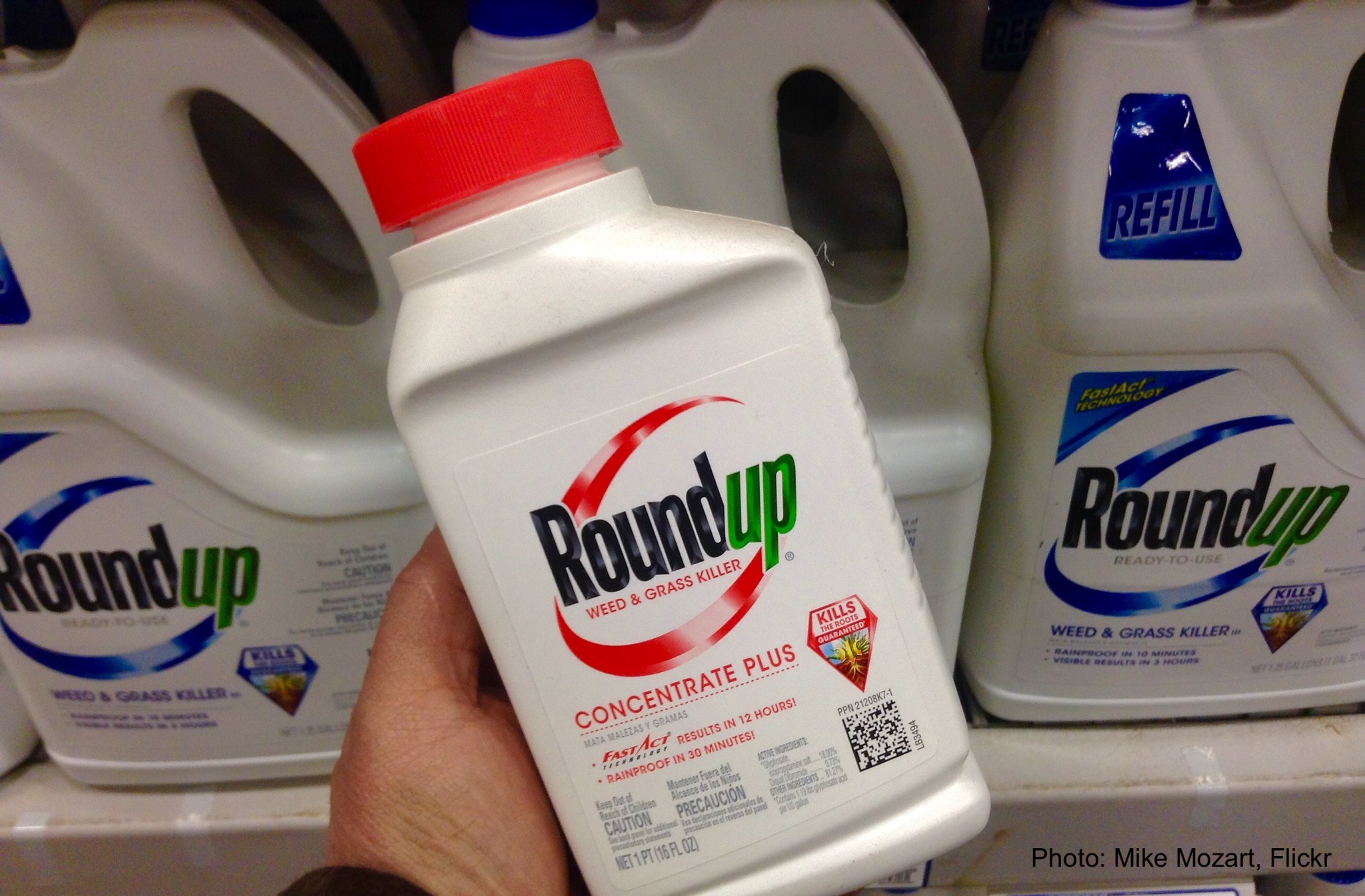 The following article about the popular but often criticized weedkiller Roundup is from the website ConsumerNotice.org, a website dedicated to providing information about harmful products, environmental hazards and preventing personal injuries, and is being republished with their permission. I found the piece very thought-provoking.

Roundup alternatives without glyphosate are available and can be effective. Organic brand options use naturally occurring oils or acids, and some alternatives can even be made with household ingredients. Farmers may find it easier to use different herbicides or farming methods.

Interest in alternatives to Roundup has grown quickly since concerns emerged over the herbicide’s safety. Its active ingredient, glyphosate, is branded as a probable cause of cancer by the United Nation’s International Agency for Research on Cancer. But regulators in the United States have said glyphosate does not pose a risk to people’s health or the environment.

At the same time, more than 13,000 Roundup lawsuits claiming the pesticide caused non-Hodgkin lymphoma or other cancers have been filed in courts around the United States.

Everyday consumers may be in a better position than farmers to adopt alternatives to Roundup. Large farms or landscaping operations may have a harder—and more expensive—time giving up glyphosate-based herbicides.

Roundup Alternatives for Your Lawn and Garden

There are several glyphosate alternatives for controlling weeds around your house. You may need to consider different options for different parts of your yard or garden. Not all options may work in all cases.

Putting down a 2- to 3-inch layer of mulch will cut off the sunlight weeds need to sprout. Any weeds that manage to germinate will suffocate under the weight of the mulch.

A handful of iron-based weed killers have been approved by the American Environmental Protection Agency. Broadleaf weeds absorb iron more easily and in higher amounts than the grass in your lawn. As the iron oxidizes, it kills weeds within just hours after applying it.

Manually digging up weeds by the root may be the most effective way to get rid of them. It is also the most labor intensive.

Several brands of organic herbicides are available in the United States, Canada and other countries. They tend to use naturally occurring oils or acids to kill weeds. These products typically work on weeds after they’ve sprouted. However, they are not usually effective against perennial weeds.

Organic Roundup alternatives include herbicidal soaps that use fatty acids to kill weeds and industrial vinegar, which contains much higher levels of acetic acid than what you have in your kitchen. Acid-based herbicides burn down some young weeds.

Corn gluten meal can kill grass weeds and broadleaf weeds*. To use it, spread 20 pounds for every 1,000 square feet of garden. Wait five days to water the area if it hasn’t rained. It should kill weeds for up to six weeks.

*Editor’s note: Corn gluten meal is a pre-emergent herbicide, useful only in preventing germination. It will have no herbicide effect on existing weeds, but will prevent weed seeds from germinating.

Organic herbicides are most effective when weeds are still small and less effective as weeds get older, according to a study by the University of California Division of Agriculture and Natural Resources.

They were also expensive for large-scale use, costing $400 to $600 an acre in 2010, which was more costly than pulling weeds by hand.

Home Recipe for a Roundup Alternative

If you’re worried about Roundup and cancer risks, you can cook up an alternative using easy-to-find household ingredients. The internet is full of formulas you can make at home, but you should be careful. Even seemingly safer or organic mixtures can kill plants you want to protect, damage your soil or cause you harm.

Researchers at North Dakota State University tested a popular vinegar, salt and soap homemade herbicide formula in 2014. They found it was effective at killing small annual weeds. It didn’t work very well on large annual weeds or perennials. Annuals are plants that only live a year. Perennials are those that live two years or more, coming back each year.

The researchers found glyphosate was cheaper, but the homemade mix, using store-brand ingredients, was still less than $3 a gallon. That made it practical for home use against certain weeds.

The mixture can still be toxic to humans and animals if swallowed. Based on animal tests, the researchers estimated that a gallon of the salt and vinegar concoction was nearly 10 times more toxic than the store brand glyphosate they tested it against. So, it should be stored away from children and pets.

You should also be aware that vinegar may contain glyphosate. That’s because most vinegar is made with corn and most corn in the United States is grown from Roundup Ready seed. Those are crops genetically modified so farmers can continue using Roundup as the crop matures.

“So, the vinegar you are using to spray your weeds is probably made from corn that was sprayed with glyphosate: the very herbicide you were trying to avoid,” the researchers at North Dakota State University wrote.

You might get around this problem by using certified organic vinegar.

Farming Techniques, Other Herbicides and Robots as Alternatives

The first Roundup-resistant weeds cropped up in a Delaware soybean field in 2000 and have been a growing problem ever since. By 2014, at least 24 species of weeds had developed a resistance to glyphosate.

A study in 2008 in the journal Pest Management Science called glyphosate “a once-in-a-century herbicide.” Despite the rise of Roundup resistant weeds, it’s been difficult for researchers to find anything that works as well as glyphosate at controlling weeds.

But Bayer AG, the drug and chemical giant that makes Roundup, promised in June 2019 to spend $5.6 billion over the next 10 years on herbicide research.

One alternative may be biopesticides, a staple of organic farming. They’re made of naturally occurring substances found in plants, animals, minerals, fungi and bacteria. The Environmental Protection Agency reported more than 18 million acres were being treated with biopesticides in 2015.

Some farmers have switched to an older pesticide called dicamba. It can be sprayed on crops that have been genetically modified to be resistant to it while killing the weeds around them. But it’s been blamed for drifting and destroying 3.6 million acres of unprotected crops in 2017 alone.

Crop rotation—changing the crops grown in a field from season-to-season or year-to-year—can break up weeds’ growth and reproductive cycles. Growing cover crops that protect and enrich the soil during the rotation also helps.

New agriculture robots may soon take over mechanical weeding chores or reduce the amount of pesticides sprayed on crops.

French company Naio Technologies has been testing its Dino weeding robot in the United States. Its operator types in instructions, such as field and crop row dimensions, on the four-wheeled robot’s controls. It then uses GPS and cameras to move through the field using cultivator blades to rip up weeds.

The company says the electric robot can cover 12 acres in eight hours on its own. And it could potentially cut labor costs. The New Food Economy, a nonprofit news organization, quoted a farm production engineer as saying one person could manage a fleet of 10 such robots, eliminating the need for 10 people to man a tractor each.

Coupling robots with organic herbicides could be an economically and environmentally friendly combination.

“We see these herbicides eventually being used commercially with camera-based precision applicators that ‘see’ weeds and deliver herbicides only to the weeds, not to the crop or bare ground,” W. Thomas Lanini of the University of California wrote in a report on research into organic herbicides.

The solar-powered ecoRobotix does just that using artificial intelligence and cameras to navigate and to identify weeds as it passes over. Two robotic arms spray pesticide precisely on weeds. And it uses 20 times less herbicide than conventional sprayers.

Why Is Roundup Still So Widely Used?

Roundup became the first glyphosate-based herbicide when it hit the market in the 1970s. Today, glyphosate is the most widely used weed killer in the world. Much of its appeal is that it is cheap and effective, according to researchers at North Carolina State University.

In a 2018 Extension Service publication, weed scientists Joel Neal and Andrew Senesac wrote that glyphosate has several advantages over other weed-killing options. It kills a wide variety of weeds, doesn’t get into the soil and kill other plants, and it’s less expensive than other herbicides.

Source: Massachusetts Office of Transportation PlanningThe scientists said there are effective alternatives to glyphosate, but each tends to have a drawback. They wrote that alternatives “will be, in some way, less effective, less convenient, and/or more expensive.”

Terry Turner has been writing articles and producing news broadcasts for more than 30 years. An Emmy-winning journalist, he has reported on consumer policy issues before the American Congress, the Consumer Product Safety Commission, the Food and Drug Administration and other American federal agencies.

Consumernotice.org is committed to providing high-quality information and resources to empower consumers seeking to identify, avoid and report dangerous products and services.

7 comments on “Alternatives to Roundup”