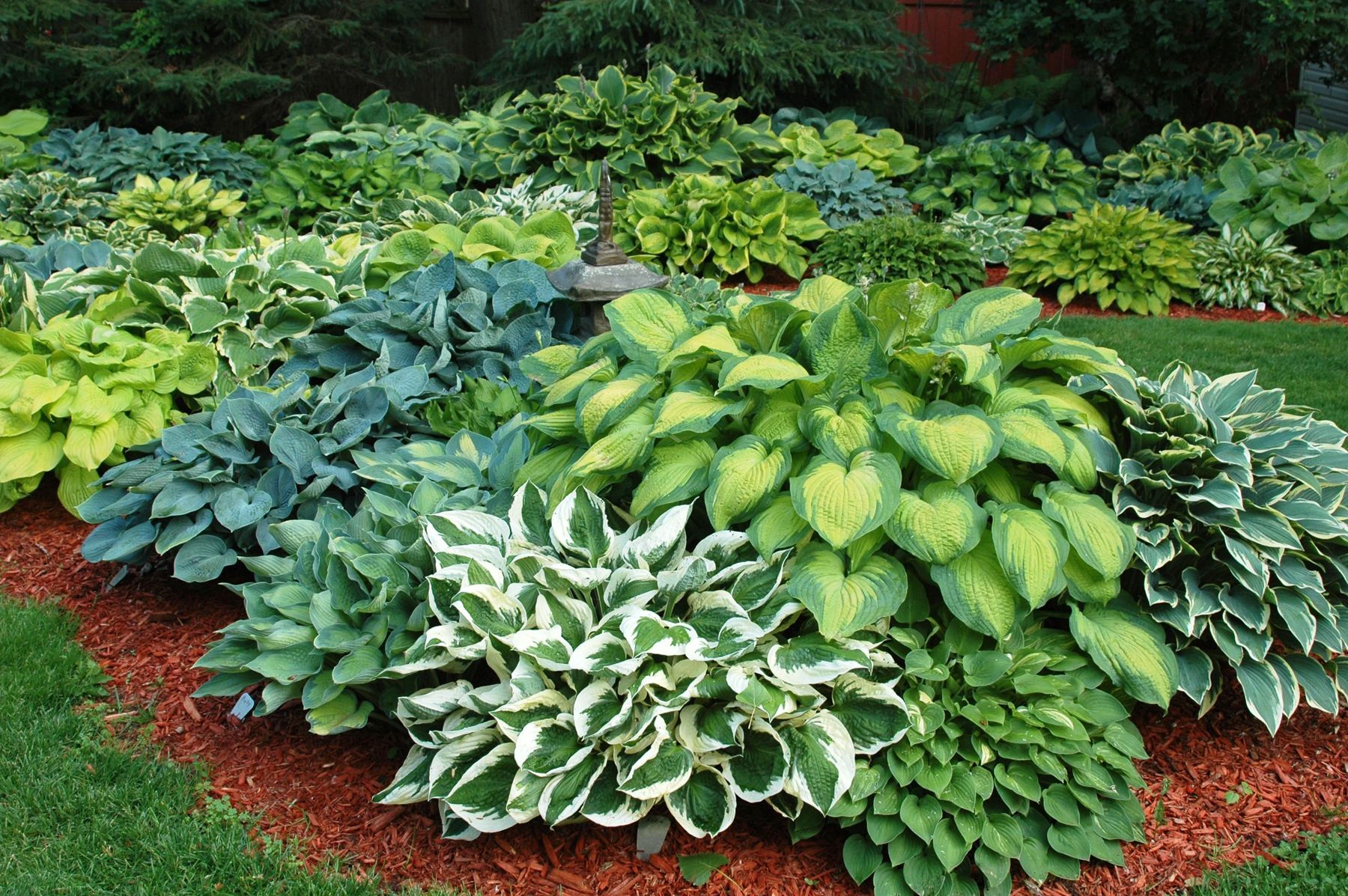 What do you really know about hostas? Photo: http://www.grassrootsdesign.ca

Hostas are one of the most widely grown perennials in temperate climates, but that doesn’t mean that all the information that circulates about them is correct. There are a few myths about hostas that keep being repeated. Here are a few:

Reality: In fact, while most hostas are shade tolerant, but that doesn’t mean they love shade. It’s more like they’ll put up with shade, since they have no other choice (you planted them there and they don’t have the ability to move on their own). In their native Japan and China, most receive some sun and many in fact grow in full sun. True enough, in hot summer climates, their leaves may burn during the summer if constantly exposed to full sun, but in cooler ones, they do fine in a sunny location, especially if you keep them well watered.

In most climates, you’ll find hostas have better color when they receive at least a few hours of morning sun (cooler than afternoon sun). Yellow hostas, especially, are more brightly colored in fairly sunny spots. Blue hostas are perhaps those that look best in shade, as the waxy white powder that colors them tends to fade away more quickly in the sun.

So, in most cases, partial shade is best for hostas, but if you want to grow them in deep shade, that’s all right. Just don’t expect them to grow very quickly!

Reality: Dry shade is that situation found under trees with shallow roots where the trees above absorb most of the moisture, leaving the soil constantly dry. In fact, hostas prefer moist soil and will grow best in soil that is always at least a bit moist, but will tolerate drought if they have to. That doesn’t mean they like it. If they’re kept constantly drought-stressed, they’ll grow slowly if at all. Especially keep young plants moderately moist until they reach their full size.

Mulching can go a long way to keeping hostas in a state of reasonable moisture when growing under trees, but deep and thorough waterings may be needed in some climates or during periods of drought.

Reality: Hostas rarely need dividing. They grow best if allowed to take on their natural, full shape. And that can take years, especially in the case of truly big hostas, like ‘Sagae’ and ‘Sum and Substance’. No harm comes from dividing hostas, but do be aware that it sets them back.

The best frequency for dividing hostas is therefore … never!

(I’ve always felt this myth was likely conceived by jealous gardeners who want divisions of our plants.)

Reality: True enough, some hostas can suffer severe slug damage, especially bargain-basement, fast-to-multiple hostas like the Undulata hostas (‘Undulata Albomarginata’, ‘Undulata Mediovariegata’ and ‘Undulata Univittata’), but others almost never suffer slug damage. Blue hostas (the powdery bloom that covers their leaves seems to put off slugs) and those with thick leaves are especially resistant. Many hosta growers point out specifically which of their hostas are slug resistant: why not follow their advice? And I’ve published a list of slug-resistant hostas: Slug-free Hostas.

Also, do note that holes in hosta leaves are not always due to slugs: hail, fallen branches, cutworms, rabbits and being stepped on can also damage leaves, so you can’t always blame the admittedly annoying little molluscs for every hole you see.

Myth 5: You have to remove hosta flowers to maintain your plants’ health.

Reality: The idea behind this myth is that if you allow a hosta to produce flowers, and the seeds that follow, that will stunt its growth. However, in fact, whether or not you remove hosta flowers makes essentially no difference.

As with many long-lived plants, hostas only put a fairly small amount of energy into blooming and producing seed. You’ll probably see no difference whatsoever in their growth if you leave the flowers in place.

This myth probably originated in the fact that hostas are usually grown for their foliage and their flowers are of only secondary interest or may, in certain cases, even detract from the plant’s overall effect. So why not remove them? And indeed, you certainly can.

However, those flowers also feed bees, other insects and hummingbirds. And there are also some hostas whose bloom is truly remarkable, either in appearance or perfume … or both. Why even bother planting hostas with striking, fragrant flowers like Hosta plantaginea or ‘Fragrant Bouquet’ if you intend to cut off their blooms?

Myth 6: You should never buy hostas produced by tissue culture, as they won’t be true to type.

Reality: These days, almost all hostas on the market are raised by tissue culture. You’d have a hard time finding anything else, even if you go to a specialist hosta grower. The concept of tissue culture is that the grower takes a few cells of a desirable hosta, then multiples the cells under laboratory conditions to obtain thousands of identical plants, if not hundreds of thousands, then grows these on to a saleable size.

Sure, there were few misfires back in the early days of tissue culture, giving plants that weren’t true to type, but the situation has now been greatly improved and certain laboratories have an excellent reputation for producing quality stock.

The truth is that reversions (hosta varieties that return to a previous form) and mutations are possible during any kind of hosta propagation. Just like you’d remove and discard any reversion or abnormal growth from a hosta in your garden, top-quality labs carefully examine and discard any plants that aren’t true-to-type.

If you buy your hostas from a reputable grower, you needn’t be concerned over how the plant was multiplied: the plant will be as labelled!

Reality: Yes, some hostas do become greener and greener as the summer advances, but it’s not because of fertilizer.

Many hostas are “viridescent,” their foliage may start off yellowish or greenish white, but will slowly turn green as weeks pass. This is especially true of yellow and white variegation: it tends to be most intense in spring and will fade and sometimes become greenish as time goes on. Some variegated hostas, like Hosta ‘Undulata Mediopicta’, become entirely green by summer’s end. Among other variegated hostas reputed for their viridescence, although to a lesser degree, are ‘Allegan Fog’, ‘Dancing Stars’, ‘Guardian Angel’, ‘Midnight at the Oasis’, ‘Whirlwind’, ‘White Christmas’, ‘White Elephant’ and ‘Zebra Stripes’.

Also, the powdery waxy bloom that gives blue hostas their blue coloration also tends to wear off over the summer, making them greener and greener.

However, these greenings are due to the nature of the plant, not fertilizer. So don’t hesitate to fertilize your hostas, especially if you are one of those people who removes hosta leaves in the fall (hosta leaves left in place will supply most of the plant’s mineral needs for the season). Fertilize moderately, at no more than half the rate recommended on the label.

You can use the fertilizer of your choice: hostas really don’t much care what formulation you use!

Well, they actually used to be, but over the last few decades, a virus, called hosta virus X (HVX), has started to show up in hostas, plus there are a few other suspected viruses that seem to be slowly moving into hosta culture as well.

The main symptoms are abnormally mottled leaves that come back year after year, sometimes becoming twisted or developing brown spots. There are no home cures for plant viruses. You’d do best to destroy the plant and all the immediate neighboring hostas (the disease can be present, but take a few years to show up, so consider apparently healthy hostas growing nearby to be suspect).

Note that most home gardeners never run into a hosta virus X, as serious nurseries are now well aware of it and quickly cull their fields when it appears, but it’s still something you should be aware of.

Myth 9: The best time to divide hostas is in the spring.

Reality: You can in fact safely divide hostas at any time the ground isn’t frozen. Yes, even in the middle of summer! However, from the hosta’s point of view, the best time is in early fall, four to six weeks before the first frost. This is when the plant has stored the most energy in its rhizomes, allowing the new divisions to get off on the best possible foot when you divide them.

Actually, hostas are edible and are in fact harvested as vegetables in Japan. Spring sprouts, called urui, are even sold in supermarkets. The flowers too are edible.

Be forewarned, though, that hosta leaves contain saponins that are slightly toxic to many pets, like dogs, cats and horses and quite deadly to fish. For more on edible hostas, read Eat Your Hostas.

5 comments on “10 Popular Myths About Hostas”