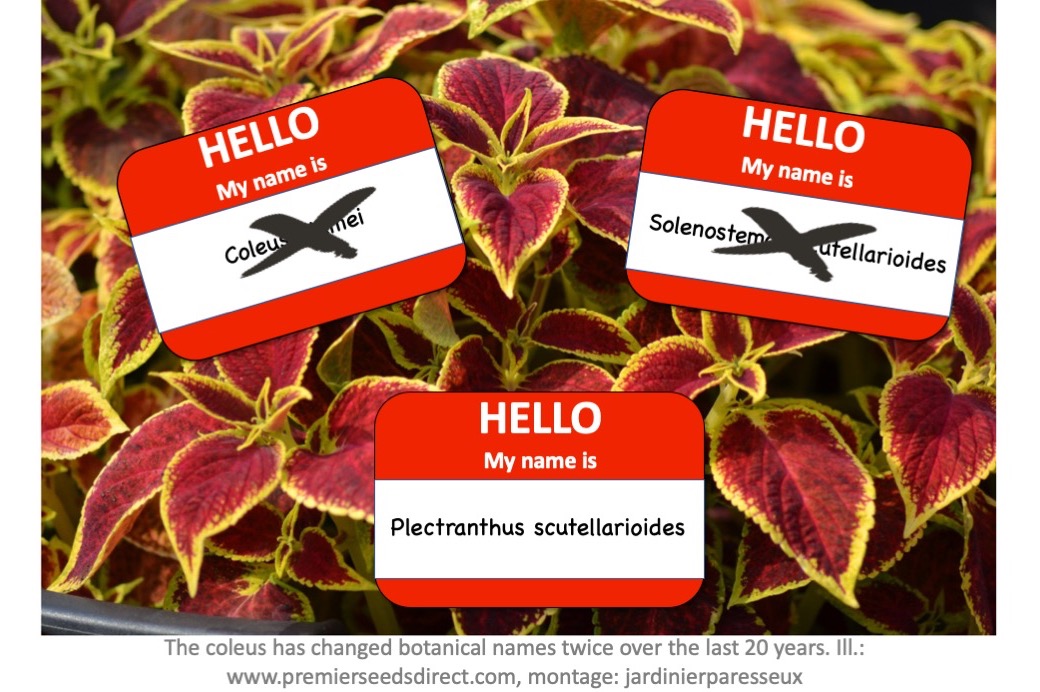 Question: You mentioned in one of your articles that the coleus had a new botanical name. Who decides these name changes? Why has the plant changed its name?

Answer: Some botanists and biologists specialize in naming species: they’re called taxonomists and are practicing taxonomy. Their job is to verify the origins of plants and animals and the links between them in order to classify them and give them appropriate names.

It was the eighteenth-century Swedish naturalist Carl Linnaeus who established the binomial system we use today. It was designed to replace the previous system, where the name of any plant or animal was a description of its characteristics, sometimes 20 words or more long!

According to the binomial system, every plant is placed in a genus, and therefore has a generic name, such as Pinus for all pines and Monarda for all bee balms. Then, to distinguish between different plants in each genus, it also gets a specific name (species name), for example Pinus strobus for Eastern white pine or Pinus sylvestris for Scotch pine.

Since there are two names, this is called the binomial system. Think of it like a surname followed by a given name, Chinese style. The Jones family, for example, could have three children: Marius, Jennifer and Norbert. The name Jones is used to identify them as relatives while the given name tells you which of the Joneses we’re referring to. In the case of Pinus, therefore, there are many species, including P. strobus, P. sylvestris and P. rubra, and their generic names tells you they are related while their species name tell you which one is under discussion.

Theoretically, these names are immutable and the same names are used all over the world. Thus, although the Eastern white pine (Pinus strobus) probably has 50 common or more common names in various languages all over the world (white pine in North America, Weymouth pine in Great Britain, Уайт-Пайнin Russia, etc.), it has only one botanical name. Therefore, whether you travel to Russia, Japan or China, you can use the name Pinus strobus and make yourself understood. I’ve had wonderful garden conversations in Italian and Polish where both parties understood each other perfectly by using botanical names and a few smiles, head nods, and gestures.

So far, so good. But some names have changed over the centuries, usually for logical reasons: this is usually because two botanists gave the same name to different plants or, quite the opposite, two scientific papers published the same plant under two different names. In these cases, the first published name always has precedence, even if one of the names is better known.

Today, though, most botanical name changes occur when a taxonomist finds that a plant was placed in the wrong genus or species. It’s a bit like poor Marius Jones discovering at age 47 that he was switched at birth and that his real name is Heinz von Schmidt.

The main reason that these changes are deemed necessary is because, although Linnaeus and the taxonomists who followed him tried hard to classify plants correctly, that is, according to their nearest relatives, they sometimes got it wrong, largely because they were looking at superficial criteria. Linnaeus believed details of the flower, like its number of petals or stamens or other features, were the best way to classify plants. But botany is undergoing a revolution today, because scientists can now study plant chromosomes (their DNA) making plant nomenclature no longer a question of making the best possible guess, but of actually analyzing a plant in its most intimate details. It is now possible to be more precise than ever in determining the relationships between plants.

As a result, taxonomists are finding that some plants long considered to be close relatives are more distantly related than previously thought while others thought to be very distant relations are more like siblings. Since names are used to indicate the relationship between plants, these findings will necessarily affect some botanical names.

Take the coleus, a popular garden and house plant with multicolored foliage, as an example.

The coleus was originally given the botanical name Coleus blumei and therefore shared its generic name, Coleus, with dozens of other related species: Coleus caninus, Coleus elatus, etc. But back in 2006, a taxonomist decided that genus name Coleus was invalid, that all the plants bearing that name should actually be called Solenostemon, and published a paper to that effect. So, all these plants had to change their names to Solenostemon. The genus Coleus was no more!

Normally, when a plant changes its generic name, it retains its specific name, but with our coleus, there was a complication: There was already a plant named Solenostemon blumei. Since two plants can’t share the same name (imagine the confusion if they did!), it was given a new specific name, scutellarioides, and thus became Solenostemon scutellarioides. The new specific name comes from the fact that coleus flowers resemble those of the skullcap (Scutellaria spp.) (spp. means “many species”).

But things didn’t stop there. Another taxonomist looked at the DNA of the Solenostemon species and came to the conclusion that there was no significant difference between most solenostemons and another genus, Plectranthus. So in 2012, he transferred all but one species to the genus Plectranthus. The correct botanical name for the good ol’ coleus is therefore now Plectranthus scutellarioides.

It turns out that the genus Plectranthusis not unknown to gardeners. Several species are grown as annuals or houseplants: Swedish ivy (Plectranthus australis), Mexican mint (P. amboinicus), white-edged Swedish ivy (P. coleioides ‘Marginata’), etc. And sure enough, they look a lot like a coleus in many, many ways. But that means you’ll have to rewrite a whole lot of labels if you have a big collection of coleus!

UPDATE: The name of the coleus has been changed yet again! As of 2019, it’s now Coleus scutellarioides. Studies show that it is, in fact, not closely related to Plectranthus.

Let’s hope this change is the last one!

Other Changes to Come

The result of these recent discoveries due to greater knowledge about the DNA of plants is that a lot more changes can be expected in plant nomenclature. For example, the genus Aster, which originally contained more than 600 species, is now divided into 11 different genera and in fact all North American species bear new generic names, including Symphyotrichum, Eurybia and Doellingeria. The genus Chrysanthemum has also been completely reorganized. And there are many, many others.

So much for species and genera … but these genetic findings also changing our notions about even deeper family relationships between plants.

At a higher level, plants are also divided into families and subfamilies. For example, the family Pinaceae contains all pines (Pinus), firs (Abies), larches (Larix) and most other conifers except for cypress (Cupressus) and arborvitaes (Thuja), both in the Cupressaceae family, and yews (Taxus), in the Taxaceae family. All grasses are in the Poaceae family, etc. And until recently relationships between plant families remained fairly stable. But this is no longer the case now that DNA can be used to help classify plants.

For example, when lecturing, I always used to tell people that onions (Allium cepa), asparagus (Asparagus officinalis) and autumn crocuses (Colchicum autumnale) belonged to the Lily family (Liliaceae), but that’s no longer true: all these plants did retain their original botanical name, but the onion is now in the Alliaceae family, the asparagus is in the Asparagaceae family and the autumn crocus was moved to the Colchicaceae family. The lily (Lilium), though, remains in the Lily family (Liliaceae) … thankfully!

All these changes are disturbing for gardeners who made the effort to learn the botanical names of their plants, but think of it this way: it’s all being done in the name of clarity and science. And when this extensive review is complete, the new names should last for generations … at least I hope so!