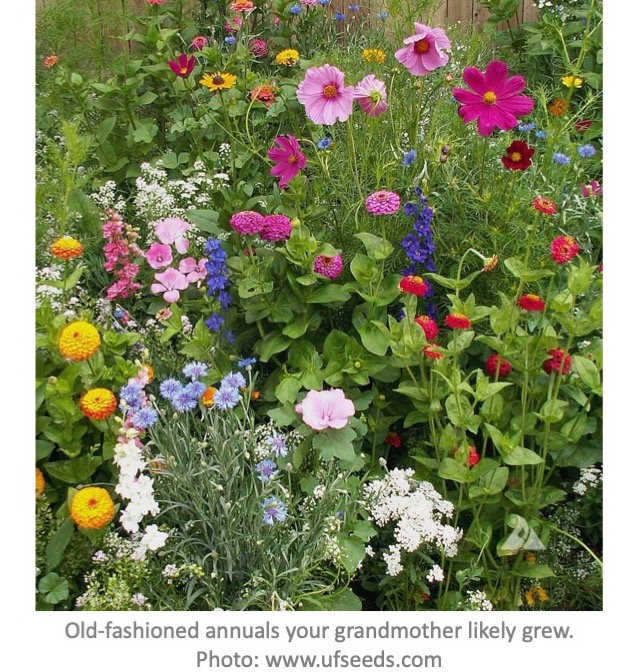 If you could travel back in time to your grandmother’s or great-grandmother’s time, you’d probably be surprised at what she grew in her flower garden.

Annuals were the most popular ornamental plants in home gardens from the 1830s until after the Second World War, but you wouldn’t have found grandma growing today’s ankle-high impatiens or begonias. She grew her rather rangy impatiens (Impatiens walleriana) as windowsill plants, calling them Busy Lizzies, and never thought of planting them outdoors, while the wax or bedding begonia (Begonia x sempervirens-cultorum) was indeed popular in public flower beds at the time, but not in home gardens (few homes had the heated greenhouse needed to grow them from seed).

She did grow snapdragons (Antirrhinum majus) and flowering tobaccos (Nicotiana spp.), but not the neat little dwarf scentless varieties of today, but rather tall, often gangly back-of-the-border types with strong perfumes. Her pelargoniums (Pelargonium x hortorum), which she called geraniums, were not the compact border plants we know, but shrubs she would have overwintered in a cold room. Her pansies (Viola x wittrockiana) had small flowers, not big ones, and she probably called them heartsease rather than pansy.

Of course, there are some annuals we grow today that she’d recognize in a flash. Modern cosmos (Cosmos bipinnatus), nasturtiums (Tropaeolum majus), zinnias (Zinnia spp.) and marigolds (Tagetes patula and T. erecta) may be longer-bloomed than the old-fashioned varieties or produce more flowers, but they’re still much as she knew them. And petunias (Petunia x atkinsiana) of all sizes and shapes were already widely available by the early 1900s.

If the post-WWII effort in hybridizing annuals seems to be mostly dedicated at getting bigger flowers on shorter plants, pre-WWII, scent still mattered.

We’ve all pretty much forgotten that the sweet pea (Lathyrus odoratus) got its name from its delicious fragrance, since most modern sweet peas have no scent it all, but the sweet peas of grandma’s time were all highly scented. Less ruffled and smaller than those of today, they still came in the full range of colours we now expect: reds, pinks, whites, purples and much more. There were no bush-type sweet peas back then, they were all climbing plants, using tendrils to grip trellis supports. And Grandma grew them differently than we do now. The general advice at the time was to sow them outdoors in the fall for early bloom in spring, then to cut them back severely after their first flush of bloom to stimulate a second flush in the fall.

Heliotrope (Heliotropium arborescens) was highly popular in grandma’s day under the curious name of cherry pie. Its perfume was known by all and remains today the scent used in baby powder. It was not the most beautiful of annuals, with its clusters of wishy-washy lavender-blue flowers, but oh, what a fragrance! It was hard to grow from seed, so Grandma would overwinter a plant or two in a barely heated room, then take cuttings for her summer garden in spring. Modern cultivars are more compact and have attractive dark purple flowers, but practically no scent.

Mignonette (Reseda odorata), as your grandmother knew it, had insignificant greenish flowers, but was incredibly fragrant: a plant or two in a flower bed would stop passersby in their tracks. Sadly, most modern cultivars have little or no scent.

Modern gardeners have become rather matter-of-fact about plant names and prefer few-syllabled ones our spell checkers won’t mangle, but in the past, romantic or amusing names held great sway. Kiss-me-over-the-garden-gate (Persicaria orientale, formerly Polygonum orientale), for example, won’t even fit on most plant labels, but you’ve got to admit it is charming. This giant of an annual, from 5 to 10 feet (1.5 to 3 m) high, bears weeping strands of bright pink flowers. It was sown outdoors in the fall for bloom the following summer.

Love-in-a-mist (Nigella damascena) is a fast-growing annual with blue, pink or white flowers in a “mist” of fine filagree foliage. After it blooms, it produces an inflated seed capsule that can be included in dried arrangements.

Love-lies-bleeding (Amaranthus caudatus) is a big shrubby annual that produces long ropes of purplish-red flowers that sometimes dangle to the ground. Grandma knew the secret to growing it: start in indoors only 3 to 4 weeks before planting out time. This gives a young plant that will burst into growth when planted out in the garden.

Four o’clock (Mirabilis jalapa) got its name from its flowers that pop open quite quickly at around 4 pm (5 pm under daylight saving time). The trumpet-shaped blooms, white, magenta red or yellow, often splashed with a secondary color, perfume the night, but close before noon the next morning.

Bachelor’s buttons or cornflower (Centaurea cyan’s) has blue (in the original form) to white, pink, red or purple flowers and blooms in just weeks from spring-sown seed.

Pot marigold (Calendula officinalis) is the original marigold: the word “pot” was only added after the French marigold (Tagetes patula) usurped its name. Grandma grew this as a dual-purpose plant, as its flowers were ornamental, but could also be added to soups and other recipes to replace saffron. It too grows quickly from seed sown in situ.

I’m sure Grandma never realized that those big gaudy poppies she loved to grow were the source of opium, laudanum, heroin and other drugs. In fact, she loved to sprinkle seeds from the beautiful opium poppy (Papaver somniferum) on cakes and biscuits and—my!—didn’t you feel nice and relaxed and sleepy after eating them? The opium poppy, then as now, comes in a wide range of colours and in single and double forms (the latter often called P. paeoniflorum). Sow outdoors just once and it will self-sow annually. The seed capsule is great in dried arrangements.

While you may rarely see these flowers in nurseries these days, they’re all still available by mail from seed houses … which is exactly how your grandma ordered them! So take a trip down memory lane and grow some old-fashioned annuals this summer. Grandma would be thrilled!