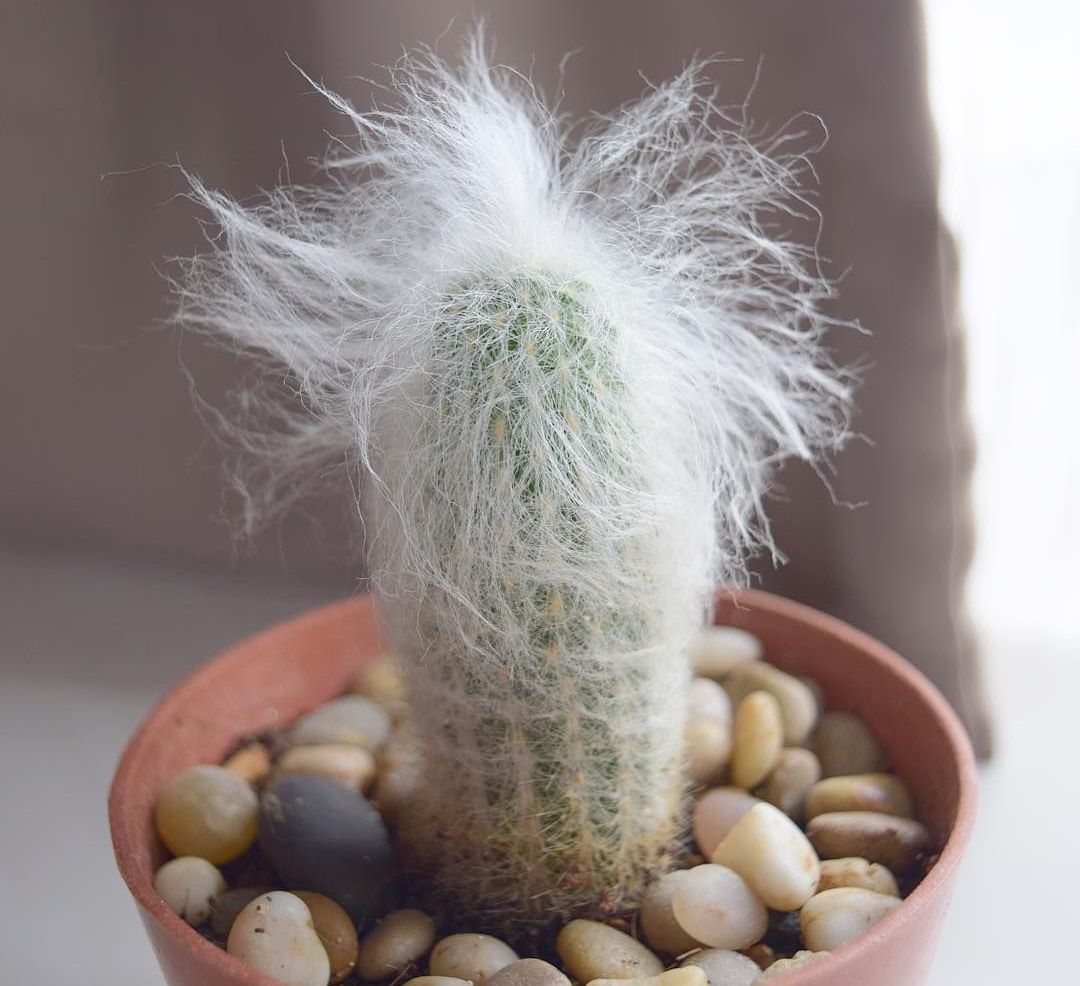 One popular cactus that rarely receives much more than a passing mention is the old man cactus (Cephalocereus senilis). It’s usually sold without a label, mixed in with other cacti and succulents, but still, it’s quite easily identified: a columnar cactus completely covered with long white hairs. Obviously, this fuzzy white covering suggested the unkempt white hair of an old man: even the botanical name says so. Cephalo means head (cereus refers to candle, a reference to its columnar shape) and senilis means old.

The woolly covering of this cactus almost seems to invite you to give it a bit of a hug, but that would be a mistake. Under the fuzz there are sharp outward pointing spines. Ouch!

Since most other cactus have stems that are pretty much hairless, you might wonder why this one has a full head of hair. And there is a good reason.

Where it grows in the wild, in the mountains of Mexico, thus at high altitudes, the old man cactus is subject to extremely intense sun and heat during the day, yet temperatures down to just below freezing during winter nights. The hair helps protect it from both. During the day, it keeps dangerous ultra-violet rays from burning the fragile young cells while the fuzz traps a layer of air between the spines and stem, keeping heat at bay. During the winter, the same air layer traps heat during the day and thus provides insulation from cold winter winds.

On mature specimens, the lower hairs eventually fall off, leaving only the top part covered in fuzz. This type of hairy upper growth is called a cephalium.

I first grew an old man cactus when I was just a boy… and soon lost it to rot. I’d put it in a terrarium where it’s hard to give more than medium light, yet this desert plant prefers full, blazing sun. I had more luck when I grew a second specimen on its own in front of a sunny window. I kept it for about 7 years, until I moved away to study, and when I got back, it was gone. My guess is that, top-heavy as it was, it had toppled over and broken its pot, and no one in my family would have wanted to try repotting such a spiny plant.. At any rate, it had by then become big and unwieldy, not something I’d want to take to university with me.

Rule one with this plant is to give it full sun or as close to full sun as you can. It simply won’t accept anything less. As for watering, keep it on the dry side. Water it abundantly, completely soaking the potting mix, then wait until the soil is essentially bone dry before watering again. If you have spot that is cool to cold but above freezing in the winter (which it will appreciate), it may need no watering at all from late fall through spring. Under warmer conditions, do water it a few times during the winter.

Theoretically, it can take a light freeze… but yours will do much better if you keep it above 50˚F (10˚C) indoors. (Outdoors, it will adapt to arid climates in USDA hardiness zone 9 and above.)

Either don’t fertilize it or do so only very lightly, maybe once or twice a year from spring through summer at one quarter the recommended rate.

If the hairs become dingy, apparently you can clean them by dipping an old toothbrush in soapy water and combing through them. I’ve never found that to be necessary on my plants.

Don’t expect flowers from this cactus. It can take decades to bloom, even in the wild. I’ve never seen the pinkish white flowers, not even in public greenhouses.

Your cute little old man cactus will eventually become a monster (in the wild, it can reach up to 50 feet/15 m tall with a stem up to 18 inches/45 cm in diameter, although that can take a century!). It never branches and most plants remain solitary, but some specimens may eventually form offsets at the base. However, that too is decades away.

When it becomes too big (and again, that won’t be for many, many years, as it’s a very slow-growing plant), cut it back to near ground level, which will force it to produce offsets you can then root and pot up individually. You could also root the top (leave the cut end exposed to the air for several weeks until it has fully healed over).

There are other cactus covered in white hair, most growing under the same extreme mountain conditions as the old man cactus.

The Peruvian old man cactus (Espostoa lanata) is quite similar in its youth, but with golden spines that clearly peek out from the white hair. Grow it much like the regular old man cactus.

The silver torch cactus (Cleistocactus straussii) is a sort of smaller version, with narrower, clustering stems and white hair that is not as long or dense. Faster growing, it will bloom fairly readily indoors, with curious tube-shaped red flowers, but only after 15 years or more.

And you’ll find many other “old man” type cactus offered through specialist growers.

The old man cactus: slow but steady, practically thriving on neglect, it might be just the plant you need to complete your cactus and succulent collection.

1 comment on “How the Old Man Cactus Got Its Fuzz”