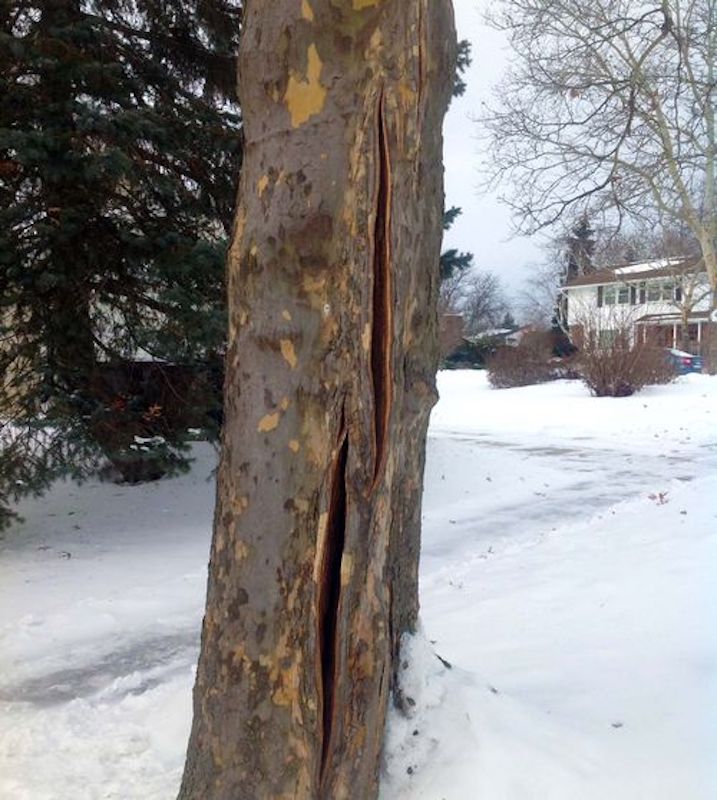 A frost crack is a crack in the bark of a tree that appears during the winter, especially on a fairly young tree growing in a sunny location. It usually seems to occur when a rather warm day suddenly turns bitterly cold. This sudden drop in temperature catches the tree unprepared. The cells of the sapwood, full of sap as the name suggests, then expand rapidly due to the cold, faster than the drier bark outside does, then bang! The bark suddenly splits open. Indeed, sometimes it does so with a loud boom like a rifle shot! At least, that was long the theory behind frost cracks.

Today’s thinking sees the situation as more complicated than that. If sudden cold were the only cause, all the trees in the same sector should suffer frost cracks, but that rarely happens. Instead, although sudden freezing may trigger the most visible symptom, fissured bark, the frost crack may often actually result from undetected internal injuries, such as those caused by damage during transplantation or by mowers or string trimmers hitting the trunk. At least, that’s the current theory.

Minor wounds to a young tree often result in rot (caused by fungi) setting into the damaged parts, then spreading up the trunk, leaving a thin trail of rotten wood inside that is still invisible from the outside. It’s therefore often the rotten wood inside the trunk, which is full of moisture in its early stages, expanding more rapidly under extreme cold than the bark outside, putting pressure on the bark that causes it to suddenly split.

For this reason, the generally recommended treatment for preventing frost cracks—wrapping the trunk with a white or pale spiral or cloth in the winter—is not likely to be very effective. It’s better to choose a healthy tree and plant it very carefully so as not to damage its roots or trunk. And mulch all around the trunk so there will be no need to mow at its base: damage to bark by mowers and trimmers is a major cause of fungal infections in trees. See Garden Tools Can Be a Tree’s Worst Enemy!

Frost cracks can appear on almost any tree, but some species tend to be especially sensitive to it, such as apples, beeches, horse chestnuts, lindens, maples, oaks, sycamores, walnuts and willows.

You can’t really treat a frost crack: once it’s there, it’s there for a long time.

Don’t try to sterilize the wound or apply pruning paint or paste: these actions tend to stimulate increased development of harmful fungi!

If the bark has become detached (not always the case), it can help to carefully remove that part without damaging the cambium underneath.

Otherwise, just let the tree do its job: it will try to seal the wound starting from the edges by forming a callus layer to cover it. It will grow from the bark inwards, slowly covering the wound. Callusing won’t start in mid-winter, though, only during the growing season. If the callus doesn’t completely cover the wound the first year, or if the wound opens again due to another session of sudden cold (a frequent occurrence), the tree will try again the next year, and yet again if necessary. Eventually callus will cover the wound entirely.

Fortunately, most frost cracks do close relatively well and the trees that bear them go on to live long and healthy lives. But the wound—in the form of a straight line from bottom of the trunk to the midsection or even higher—is often still visible even decades later. And much later, when the tree is fully mature, you may well discover it is hollow, not that a hollow trunk is necessarily a problem. (See Hollow Tree? No Need to Panic!)

However, if the tree was already weak or in poor condition before the crack even started, it will likely grow weakly and unevenly, never really thriving. It’s better to remove such poor specimens while they are still young.

Adapted from an article originally published on February 27, 2015.

0 comments on “When Bark Splits Open”