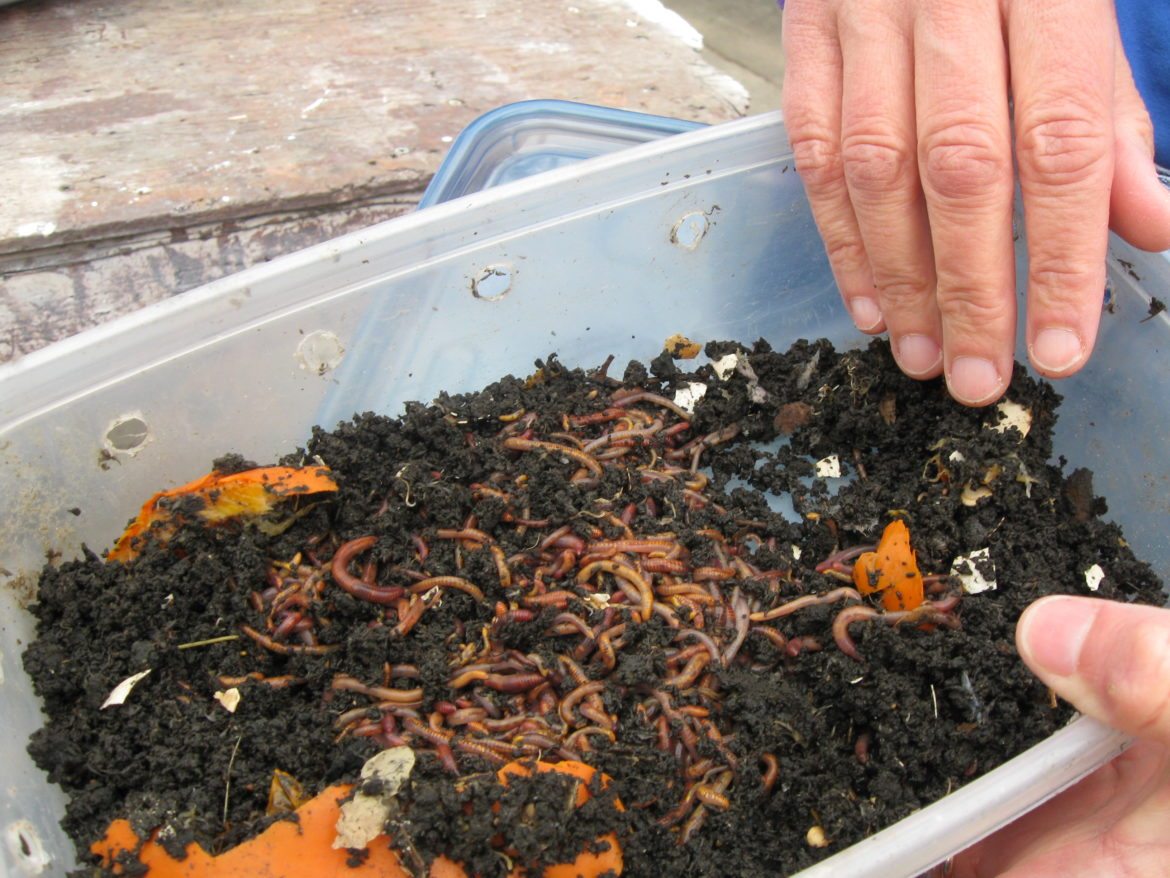 I know it may sound disgusting to some people, but worm composting or vermicomposting (also called vermiculture) is an easy-to-do indoor form of composting. You need little more than a bin, a few handfuls of worms (usually a tropical worm known as the red wiggler [Eisenia fetida]) is used) and compostable material, which you probably already produce in great quantities, and a space where you can carry it out.

And worms really aren’t all that icky, not once you get to know them.

Finally no, healthy worms don’t smell. You can vermicompost in very public spaces and no one well ever notice!

This can be a great project for a nursery school, elementary school or Sunday school: with a bit of guidance, kids can make great worm bin managers.

Let’s make it simple. Buy a worm composting bin and a stock of worms from a local supplier, perhaps one specialized in urban agriculture products. For 75 to 100$ or so, depending on the sophistication of the bin, you’re off to the races! Some cities even supply citizens with worm bins free of charge and direct you to local worm suppliers. In the USA, the USDA Extension Office can be a major help, so check around!

Yes, you could easily make your own bin from a plastic storage container, but why complicate things? Ready-to-use worm bins are available, so let’s just start with one of those.

Your worm bin can come in multiple shapes and forms: square, round, rectangular; on the ground or on legs, etc. It may well look a lot like a Rubbermaid storage container with holes drilled into it for aeration and drainage, a waterproof tray to set it in that will catch the drippings (worm tea) and a lid so the worms can’t escape. Not that they could get very far (the average home is not a viable environment for red wiggler worms!), but I’m sure you’d rather they stayed in the bin.

You’ll find most suppliers offer worms by the pound … and you only need one half to one pound (250 to 500 g) for a family-size worm compost bin. If you didn’t buy enough, no need to worry: they multiple very quickly.

You’ll also need a supply of shredded paper for bedding. Maybe you have a home shredder or there is one at your office. If so, keep a bag or two if it handy. Or tear newspaper into strips. Almost any kind of paper works, but it’s best to avoid shiny paper. And let’s lay that old garden myth to rest: no, the ink in printed paper is not toxic, so recycle all you want! Any time you use shredded paper, spritz or soak and drain it before you use it. You’ll want it moist, but not wet.

The bin is ready and the worms have arrived? Here’s what to do:

Some people feed their worms daily, but when you do that, the little guys tend to stick to the stuff easiest to digest and ignore tougher items. It’s usually best to store up your scraps and feed the worms about once a week.

You can give the worms vegetable and fruit scraps, coffee grounds, cereal, tea bags, bread, etc. Weeds from garden are fine too. They’ll also consume paper. Just avoid meat and other animal products, including milk, although finely ground eggshells are alright. Some people warn that you shouldn’t feed them onion or garlic residues nor citrus peel, but actually you can: just use them in moderation making sure you chop them up finely.

And speaking of chopping up finely, cut up all your scraps into tiny pieces, if possible. (I used to put random scraps into an old blender ( the “compost blender”) I left on the kitchen counter all week as a storage bin, then turn it on, reducing the scraps into near mush, before the weekly feeding.) Worms simply find it easier to digest small pieces.

With a scoop or trowel, dig a hole in the bedding and drop the scraps in. Cover them with moistened shredded paper (this will keep fruit flies away) and put the lid back on. Rinse out your food scraps container … and start saving up more scraps.

When you start to see a brownish liquid (worm tea or worm juice) filling up the the waterproof tray under the bin, remove it and pour off the tea into a watering can. Rich in nutrients, it can be used as a liquid fertilizer for gardens or houseplants. Dilute it in about 2 to 5 parts water.

Some bins have a spigot you can open to pour off the worm tea, making harvesting it a bit easier.

As time goes on, the bin will start to fill up with compost and you can then start to you harvest it. Of course, it will be full of wiggling, surprised worms. You can simply pick them out and put them back into the bin, but if you find that too icky, there’s a way of making the harvested compost nearly worm-free.

To do so, feed the worms on just one side of the bin for about 10 to 14 days. This will to draw them to that side, allowing you to harvest (nearly) worm-free compost from other side. After, switch sides.

Use the compost in your garden, on your lawn, mix it into potting soil, etc. It’s very rich and certainly the best compost you’ll ever produce. It’s probably better than most of the compost you can buy as well!

Fruit flies and fungus gnats love indoor compost and will settle in if you give them a chance, then flutter about and bother your visitors. That’s why it’s important to always cover the composting material with moist shredded paper any time you expose a section, be it through adding new materials or harvesting. That creates a barrier they can’t get through.

Worm composting: so simple and it gives you a regular supply of the best compost in town! What in the world are you waiting for?

5 comments on “Composting With Worms”