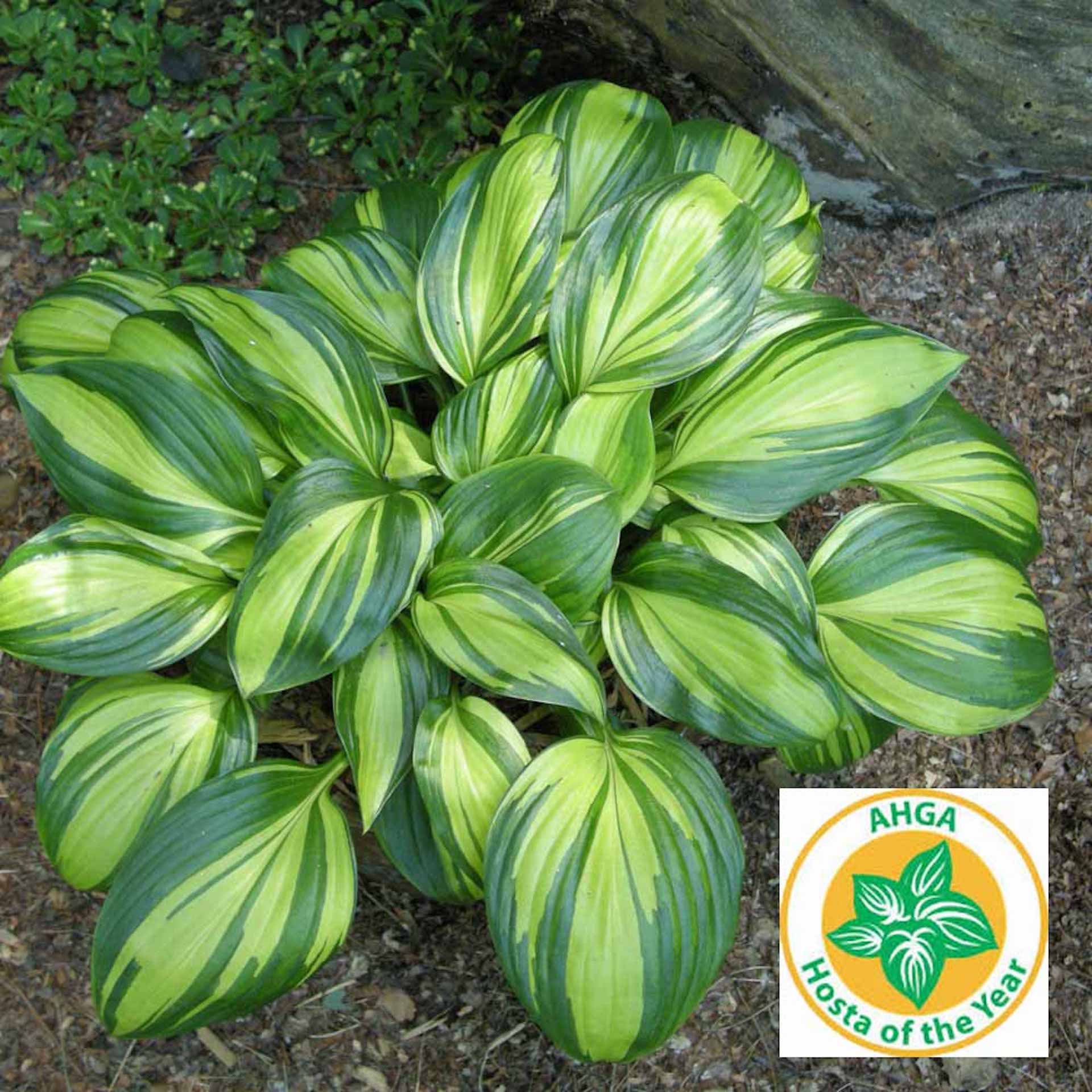 In this new year, there is plenty to look forward to in the gardening world … including award-winning plants!

One of these is the annual American Hosta Growers Association’s Hosta of the Year, issued from an auguste program that rewards hostas of great value for the home garden and landscape. And this year’s winner is no exception: Hosta ‘Rainbow’s End’.

The Association doesn’t award this prize lightly. It can only go to a plant currently on the market that has been thoroughly vetted and has proven itself worthy. The winner is never a new cultivar that might be hiding a few flaws not apparent at first. The plant must perform superbly in many zones and must also exhibit exemplary garden presence and performance, have a long season of appeal in the landscape, have leaves of good substance and demonstrate a greater than average resistance to common garden pests.

In fact, if you’re a host collector, you probably already have Hosta ‘Rainbow’s End’ in your garden: it’s such a striking plant that it has attracted plenty of interest ever since it was first launched back in 2006, after it was discovered by grower Hans Hansen of Minnesota.

The name refers, of course, to the pot of gold supposedly found at the foot of a rainbow.

‘Rainbow’s End’ was discovered as a mutation from another well-known hosta, ‘Obsession’, a rather small hosta, mostly green with only subtle variegation. ‘Rainbow’s End’ is larger than its parent and there is certainly nothing subtle about its variegation! It is instead brilliantly variegated, and not just in center of the leaf, like so many other hostas, but bright streaks of yellow (the gold at the end of the rainbow) race through the otherwise dark green leaf from stem to tip: only the margin remains assuredly deep green! Stunning in early spring, the flames pale to superbly contrasting creamy white as the summer goes on. The shiny texture of the foliage is remarkable: it almost seems to be made of plastic.

It forms a medium-size mound in the garden: about 21 inches (53 cm) wide and 11 inches (28 cm) tall. In late summer, its topped by showy reddish stems 16 to 19 inches (40 to 48 cm) bearing dark lavender, tubular flowers that attract bees and hummingbirds to the garden.

For best color, grow this cultivar in partial shade: somewhere it will get a few hours of sun each day, ideally in the morning. Otherwise, it’s a typical hosta, doing well in most garden soils. It will be quite drought-tolerant once established, but still prefers watering when rainfall is rare. In the fall, just let the foliage decompose on the spot and you’ll have met all its mineral needs. And like most hostas, it’s very hardy: zones 3 to 9, although it may not show its best coloration in areas with hot summers.

You shouldn’t have too much trouble finding ‘Rainbow’s End’. In fact, your local garden center likely offers it. Maybe not in mid-winter, but come spring, it should be front and center in garden centers everywhere. If not, it’s widely available on the Internet from nurseries that sell hostas by mail.

Hosta ‘Rainbow’s End’: it might well become the pot of gold at the end of your garden’s rainbow!