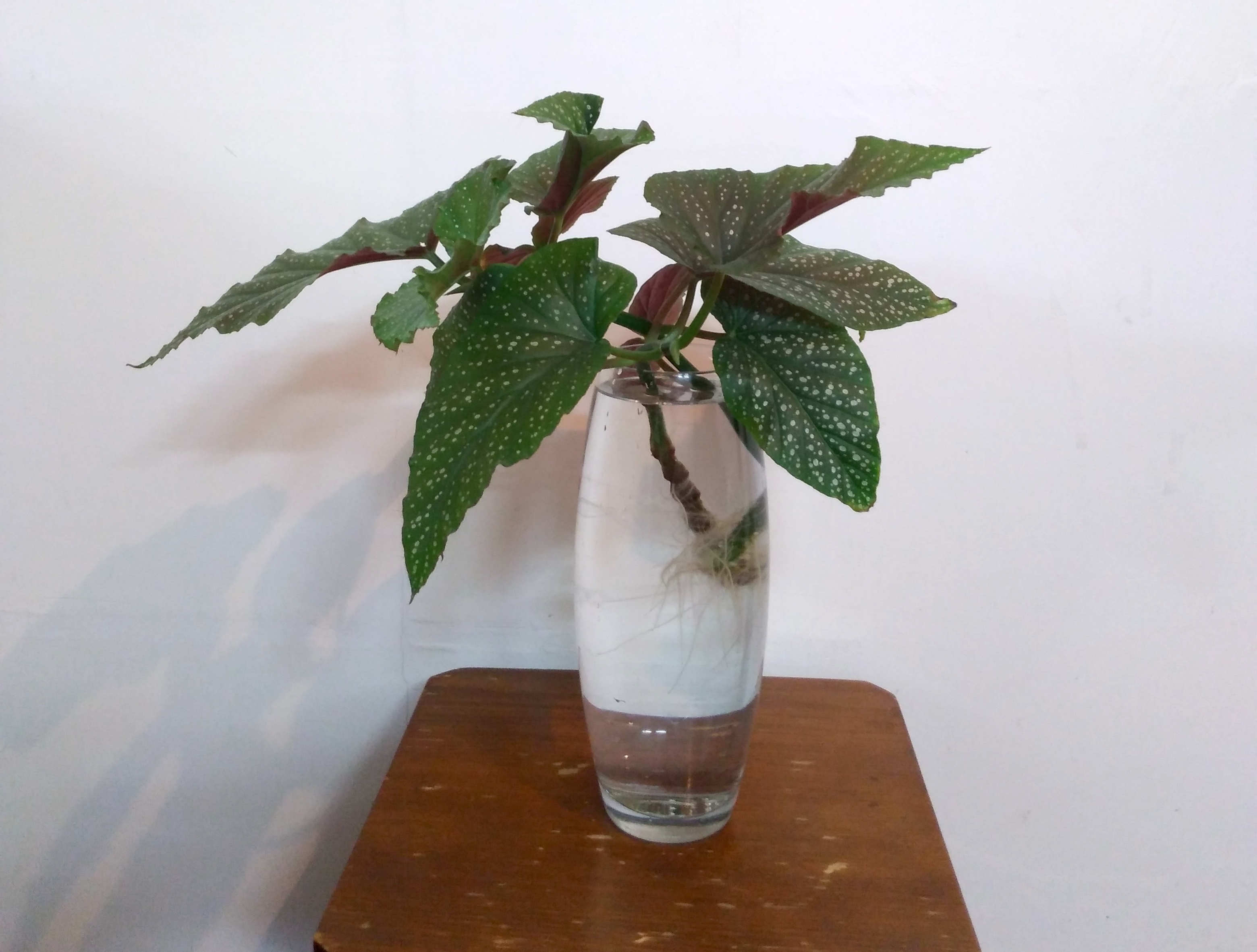 The roots of this Begonia ‘Cracklin Rosie’ are far too long: pot it up without delay! Photo: Behnam Mancini, Wikimedia Commons

For generations, gardeners have been rooting cuttings in glasses of water placed on a windowsill. And it works … sometimes. But it’s still not the best way to root cuttings.

You see, cuttings grown in water get too much of a good thing: H20. Yes, they need moisture to root, but they also need oxygen. And as water sits on a windowsill, it becomes more and more stagnant (oxygen-depleted). Also, most stem cuttings give off their own rooting hormone … that is diluted and therefore less effective when they sit in water. Plus, harmful bacteria start to form on stems sitting in water, coating the stem and new roots in a gooey sludge, while rot-causing fungi, which do best in an oxygen-depleted environment, tend to move in and work their way into the stem. Fast-rooting plants (coleus, begonias, etc.) usually do all right in water, but other cuttings seem to start well, then go downhill. As well they might, given the declining state of their environment.

Secondly, even when the cuttings root successfully in water, people tend to leave them there for far too long. Soon the glass is full of roots that are impossible to transplant intact, especially fine roots, which clump together when you take them out of the water and tend to break when you spread them out as you pot them up. Your newly rooted plant can lose half its roots or more as you plant it and each wounded root that does survive has an open wound that can possibly lead to rot: not such an auspicious beginning!

You’d do better to root your cuttings in a tray or pot of some sort of substrate: it just needs to be well aerated and fairly sterile. Potting mix, seedling mix, vermiculite, coarse sand and perlite are good choices. (Pelargoniums especially seem to prefer sand or perlite.)

Soil fresh from the garden is not a good choice, contaminated as it is with microbes!

You can apply rooting hormone to woody cuttings to stimulate better rooting, but just slip soft-stemmed ones right into a moistened substrate.

You’ll find more information on rooting cuttings in a terrestrial environment in Now is the Season to Take Houseplant Cuttings.

Still Insisting on Rooting in Water?

Old habits die hard and if you wish to continue rooting cuttings in water, that’s your choice. Just don’t wait too long before potting them up. As soon as you see small white or yellow nubs appear on the stem (these are future roots), transfer them to potting soil so they can start their life in an appropriate terrestrial environment. In some cases, that means your “cuttings in water” will need to be potted up in just 3 or 4 days!

Article adapted from one published in this blog on March 14, 2016.

1 comment on “Cuttings in Water: Maybe Not the Best Idea”