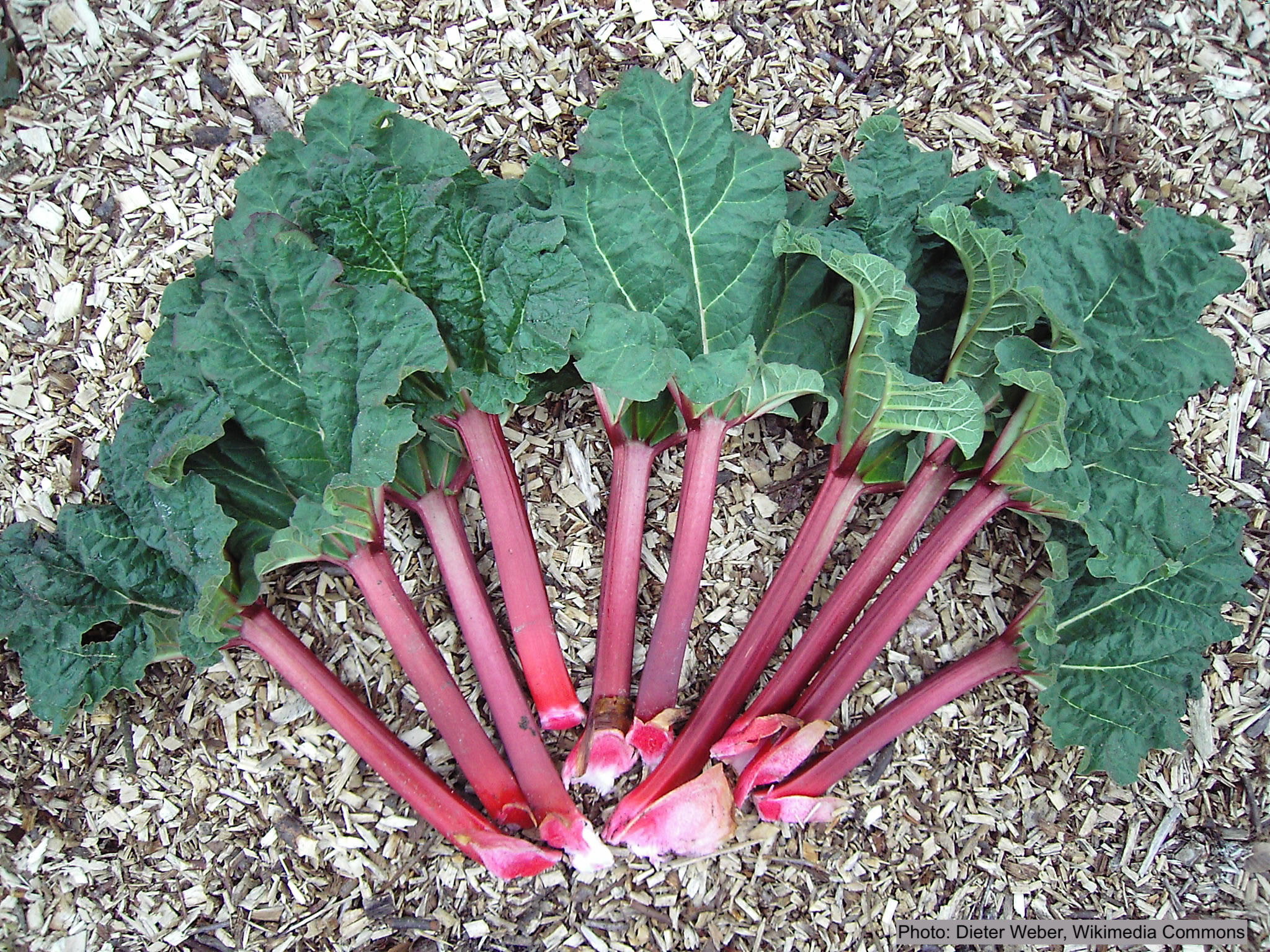 As you harvest your rhubarb (Rheum × hybridum) stalks this spring, you’ll find many websites warning you against putting the leaves in the compost. After all, every gardener knows you can eat rhubarb stalks, but that the leaf blade itself is toxic. And it just seems logical that putting poisonous leaves in the compost would be a no-no. Wouldn’t they poison the very microbes that make the compost bin operate smoothly?

No they won’t, actually. The idea that you shouldn’t put rhubarb leaves in the compost is just yet one more of the oh-so numerous gardening myths that simply refuse to die.

Let’s take a closer look at the situation.

The principal toxic element in rhubarb leaves is oxalic acid (C2H2O4), a product that is toxic to mammals, birds and some insects if it is ingested in large quantities. And that’s why rhubarb plants produce oxalic acid: to help protect them from their enemies.

But oxalic acid is only made up of carbon, hydrogen and oxygen atoms. It’s a natural product and like most natural products, decomposes readily. Soil microbes break it up in no time. Earthworms even have, in their digestive system, bacteria specifically designed to break up oxalic acid. If you simply leave rhubarb leaf blades on the ground, they quickly decompose and disappear. Why wouldn’t they do the same a home compost pile?

Besides, oxalic acid is only harmful in large quantities. Really large quantities. Humans consume oxalic acid all the time. It’s what gives spinach and Swiss chard their tangy taste, notably. And it is also found in tea, chocolate, nuts, parsley and poppy seeds. Our own bodies even produce it.

Besides, it’s a mistake to assume that something harmful to humans is also toxic to microbes. They can, in fact, handle almost any natural poison.

But Will the Compost Be Safe to Use?

Being safe to microbes is one thing, but won’t the compost derived from rhubarb leaves remain poisonous to other plants?

Not in the least. Oxalic acid is simply never poisonous to plants. And when oxalic acid decomposes, it loses any toxic properties. It will actually break down into products plants need: oxygen, water and carbon. In fact, if ever it didn’t break down for whatever reason, plants simply couldn’t absorb it: it’s too big a molecule for roots to handle.

So rest assured: there is no risk that plants exposed to compost made from rhubarb leaves will become toxic in their turn.

What About Other Toxic Plants?

The same goes for other poisonous plants in found in our homes and gardens: monkshood, dieffenbachias, foxglove, jack-in-the-pulpit, brugmansia, nicotiana, etc. They all contain products that are toxic to humans and some animals, a vast range of different poisons in fact… but there isn’t one microbes can’t handle. All will quickly break down in a compost pile, turning into safe compost you can use even in your vegetable garden.

And think about it: potato leaves and stems are toxic to humans and yet generations of gardeners have been safely composting them. Why would rhubarb or foxglove leaves be an exception?

What about walnut leaves? The leaves of walnuts (Juglans spp.) produce juglone, a product well known to be toxic to other plants. In fact, walnut roots poison the ground around them to prevent other plants from taking over their space. This is called allelopathy. But even juglone decomposes in the compost bin. In this case, it is helpful to chop the leaves up before adding them to the compost, as that will help it decompose more quickly. You’ll find more information about composting walnut leaves here.

Plants Poisonous To the Touch

So far we’ve only looked at plants that are poisonous to humans if ingested. But what about plants that cause skin reactions when you touch them, such as nettles (Urtica spp. and Laportea spp.), giant hogweed (Heracleum mantegazzianum), wild parsnip (Pastinaca sativa) and poison ivy and poison oak (Toxicodendron spp.)?

Nettles (Urtica spp.) have long been promoted as an excellent addition to the compost pile. While nettles may be irritating to the touch, they are very rich in nitrogen. They are even considered to be a compost activator. But only put stems and leaves into the compost bin, not roots or seeds. That’s because, if ever the latter escape decomposition, you could accidently spread them to other parts of the garden.

Authorities warn against composting giant hogweed and wild parsnip, but that is mainly a question of safety when handling them and of accidentally moving an invasive plant to a new site. The two plants, in fact, break down quickly in compost and that includes the furanocoumarins that cause reactions in humans. Besides, their foliage disappears in a few weeks if just left on the ground, a sign that microbes like it.

If you are absolutely certain you can protect yourself properly while handling them (add a hat and safety goggles to gloves, long sleeves and long pants recommended for nettle), you can put their leaves and stems (again, not their roots or seeds) in the compost bin. However, it would be wiser to just let them break down where they were cut. Or put them in black plastic garbage bags and let them roast in full sun for a week or so to destroy the furanocoumarins (this is called solarization) before putting them in the trash.

Urushiol, the oily toxic product present on the leaves, stems and fruit of poison ivy (Toxicodendron radicans), poison oak (T. diversilobum) and related plants, like poison sumac (T. vernix), is a very different substance. Slow to decompose, it can persist for months, not only on decaying plant material, but also on the walls of the compost bin and on any tools used to mix the compost. This is one of the very few plants you simply should not put in a compost bin.

If you cut back poison ivy, the best thing to do is to bury it where it falls and not disturb that area for a full year. Any clothes worn should be destroyed and any tools used, carefully cleaned before reusing. Poison ivy is one badass plant!

So, feel free to put the leaves of rhubarb and most poisonous plants in the compost bin, with the exception of poison ivy and its relatives.

Article adapted from one originally appearing in this blog on May 25, 2016.