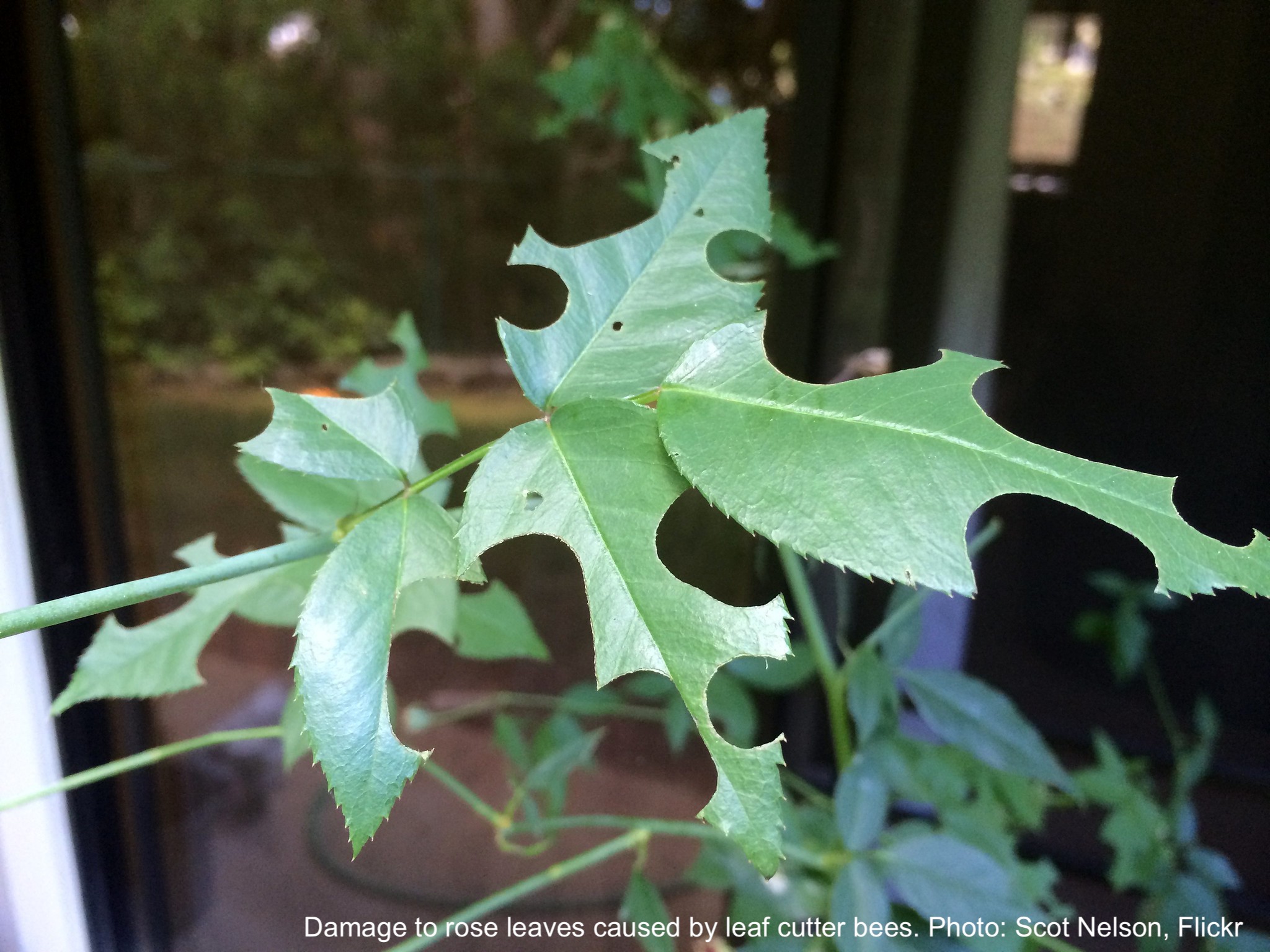 What in the world causes the semicircular holes you see in the leaves of your garden plants, holes so round and neatly cut they look as if they were made by some sort of a punch?

The guilty party is the leafcutter beef. And it’s actually a beneficial insect… if you can get over its leaf-cutting habit. And that’s what I hope to convince you of by the end of this article!

Leafcutter bees (Megachile spp.) are small solitary bees, usually black with hairy bands on their abdomen. There are more than 1500 species, usually 5 to 20 mm in length and they’re found all over the world. And, other than for an annoying tendency to pierce holes in leaves, they are considered beneficial.

You see, with the population of honeybees (Apis mellifera) in decline worldwide, gardeners need other pollinators to help ensure pollination of their plants. After all, up to a third of the plants we eat depend on bees for pollination. And leafcutter bees are among the best bee pollinators around.

Why Are They Attacking My Plant’s Leaves?

Leafcutter bees cut semicircular chunks out of a wide range of plants, mostly those with smooth, thin leaves like those of azaleas, black locusts, ashes, barrenworts, and others. Roses, hawthorns and cherries, all in the rose family (Rosaceae) seem to be particular favorites. And they also frequently cut holes in flower petals too.

Unlike other common leaf-eating insects like caterpillars and grasshoppers, leafcutter bees don’t eat the leaves on the spot. In fact, they don’t eat them at all. They cut pieces out of leaves and petals to prepare a nest for their offspring. Once the nest is well lined with leaf pieces, the female bee heads to nearby flowers to seek pollen and nectar… and in so doing pollinates the blooms. It then adds both substances to the nest: future food for its young. The theory is that the pieces of leaf, which the young never eat, are used strictly to prevent the pollen and nectar from drying out.

The bee then lays a single egg per cell, seals its entrance to protect the egg from predators… and then builds another cell in front of the first one. There may be a dozen cells per nest, even many more. The larvae that hatch feed on the pollen and nectar left by their mother right through the summer. In fact, they only leave the nest the following spring, never to return, as there is only one generation per year.

Leafcutter bees are not aggressive. They rarely sting and when they do, it’s only when they feel they’re being attacked. Their sting is less painful than a honeybee sting and in fact, with some species, you’re not even likely to feel it. Because they are solitary, even if you step on a leafcutter bee barefoot, provoking it to sting you, at least you will only suffer a single sting. There is no swarm to attack you. That’s what “solitary bee” means.

The damage leafcutter bees cause to plants is strictly esthetic. The plant does not really suffer from the attack, largely because it already produces more leaves that it really needs to thrive. Moreover, when the bees cut out sections of a few leaves, this stimulates the plant to produce more. The holes in the leaves will bother you much more than they bother the plant!

Anyway, leafcutter bees rarely stay long on the same plant. After a day, sometimes two, it will move on to “greener pastures.”

You can attract solitary bees (mostly leafcutters and mason bees) as well as solitary wasps to your garden by installing a “bee hotel.” (Note solitary wasps are not yellow jackets or hornets: they are smaller, non-aggressive, great pollinators and no more dangerous to people than solitary bees.) Commercial bee hotels are widely available, made up of various shapes and sizes of drill-pierced wood and hollow stems packed tightly together in a frame.

You can also make your own bee hotel by drilling holes of different diameters, from 3 to 14 mm, in the end of a log or by packing hollow stems (those of ornamental grasses, bamboos, elderberries and perennials are good choices) tightly together. Or just leave a piece of rotten wood lying around.

Put the hotel in your garden near flowering plants and between 1 and 10 feet (0.3-3 m) above the ground (each species has its preferred height). Ideally, the spot would be protected from the rain, but would heat up early in the morning without being in the sun all day, so a site facing southeast is best.

Obviously, solitary bees don’t only live in hotels provided by people! In the wild they nest in various cavities or dig nests in the ground.

Learning to Accept a Few Flaws

Since they are beneficial and not aggressive, plus cause only cosmetic damage, and modest damage at that, would it not make more sense to learn to tolerate leafcutter bees rather than trying to eliminate them? This is the ideal situation for applying the “15 pace rule“: before treating a plant, step back 15 paces: if you can’t see the problem at that distance, it’s probably not a problem worth treating!

You Still Want to Control the Varmints?

Well, if so, I wish you the best of luck! They are not easy insects to eliminate.

The one good way of keeping them out of your garden entirely is to eliminate all the plants that are bee-pollinated, that is, largely those with showy flowers. That’s because, although leafcutter bees do harvest a few leaf parts with which to feather their nests, they are otherwise not much attracted to greenery, but rather seek out flowers rich in pollen and nectar with which to feed themselves and their larvae. A garden without flowers will not attract bees of any kind. It might also be a bit boring.

Usually when you see the holes in a few leaves, it is already too late to react. The bee has already done its damage and has gone elsewhere. But if you catch one in the act (and remember, it will be alone: there will be no others), wait until it leaves, then cover the plant with cheesecloth or floating row cover. Leave this barrier in place for a few days. By the time you remove it, the bee will have gone elsewhere.

Above all, please don’t try to poison leafcutter bees by spraying them with insecticides. Not only will you be killing a beneficial insect, but you may also accidentally harm other beneficials.

Tolerance Is the Best Solution

Really, why not just learn to live with leafcutter bees? They really don’t do that much damage and they are so useful.

Besides, live and let live is the motto of any good laidback gardener!

Want to learn more about bees in the garden? Here’s a wonderful and very helpful article you could take a look at: Backyard Beekeeping 101: All You Need to Know from the web site Porch.com.

Text based on an article originally published in this blog on May 26, 2016.

10 comments on “What’s Cutting Round Holes In My Plant’s Leaves?”