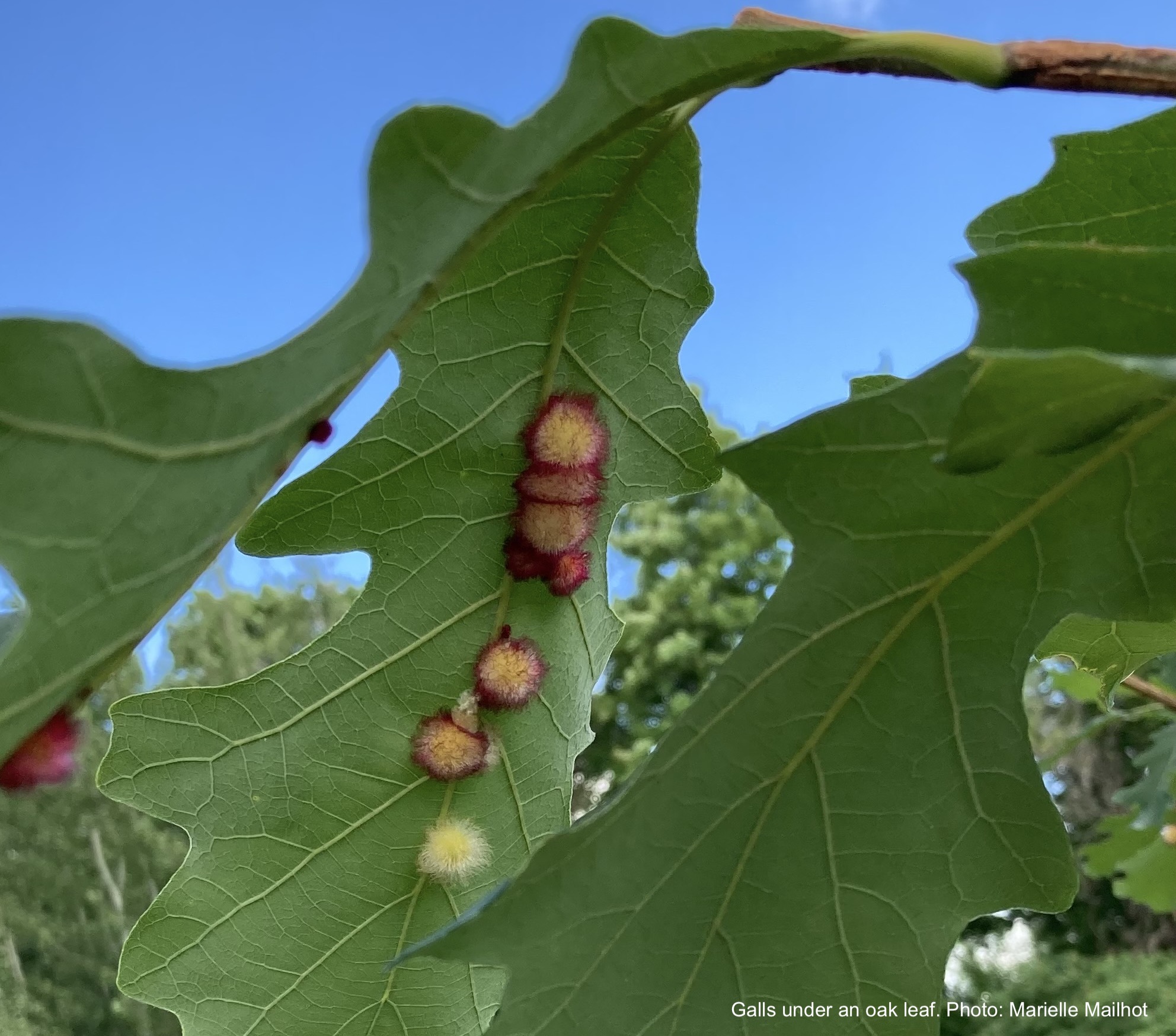 As a gardener, or even just an observant hiker, you’ll often come across plants bearing abnormal growths. They’re usually found on the leaf blade, but sometimes on the petiole. Or you may see them on the plant’s stem or at its tip. These growths are called galls and have various origins. Most are caused by insects (aphids, wasps or flies) or mites. More rarely, they can be caused by fungi, nematodes or bacteria. For purposes of this text, we’ll mostly look at galls caused by insects or mites which, for simplicity’s sake, I’ll simply call gall insects.

Typically, a gall is formed when the female gall insect pierces a leaf or stem early in the growing season and lays one or more eggs inside. She also injects (or the larvae give off) a substance that causes abnormal growth in the surrounding tissue, a tumor called a gall. This gall serves as both shelter and food to the young gall insects: they are protected from wind, rain, and predators and, at the same time, use some of the plant’s cells as food. When the young gall insects mature, they pierce a hole in the gall and leave its confines. What they do after depends on the species: some drop to the ground, others fly away, and others stay on the plant. However, the following spring, the cycle is repeated, on the same or some other plant.

What is important to understand about gall insects is they are generally fairly innocuous. Even when they seem very numerous (and sometimes they seem to practically cover the leaves!), the small amount of tissue they actually consume really doesn’t do the plant any real harm. And they rarely reduce the leaf’s photosynthetic cells enough to be of harm. So, normally, you can simply ignore them or at least just learn to put up with them, especially when it comes to leaf galls, the least harmful of all.

This is a clear case where you should apply the 15-pace rule: If you can’t see the problem at 15 steps, there is no need to treat it.

In fact, this is also one of those cases where the treatment can be worse than the infestation, because the only logical way of getting rid of leaf galls is to pull off all the leaves that carry them and that can practically defoliate the plant when galls are numerous. Even if you were able to get to all the galls (on trees, they can be out of reach), such a defoliation would be more harmful to the plant than the leaf galls ever were.

Pesticides are rarely worth trying on gall insects, either, at least not once the galls are visible. By that stage, the young insects are living inside the plant’s tissue where your spraying is unlikely to reach them.

Of course, if you apply an insecticide spray at just the right time, early in the spring as the leaves form, just when the female gall insect lays her eggs, you might be able to nip the infestation in the bud. But you rarely know if the plant will be infested that year (gall insects are notoriously sporadic in their habits), and secondly, most female gall insects are small enough to be barely visible: it would take a very perceptive gardener to notice them in time to react. And all that spraying with what might well be a pesticide harmful to beneficial insects is not that environmentally friendly!

Some species do overwinter on their host plants and do come back year after year (the spruce gall midge is an example). If so, a dormant oil treatment in the spring is worth trying and could seriously reduce their numbers.

The galls that form on stems and stem tips, such willow pine cone gall, are more harmful to the plant, because they prevent that the stem from developing normally. Fortunately, they are rarely numerous: usually only one or two per plant. If their presence bothers you, just prune them off with garden shears when you see them.

To Each Plant Its Gall

Galls insects are usually very specific: there are literally thousands of species and each one has only one host plant (oaks, roses, willows, etc.). That’s good news for gardeners: you don’t have to worry that galls will spread to all the plants in your garden.

Oaks seem to have the widest range of galls: each year can bring a different species!

And galls come in a wide variety of forms, sizes, and colors. There are oak galls that look like colored bonbons, the surprisingly frothy-looking rose gall, the tiny green bumps that turn red of the various maple leaf galls … and the list goes on and on.

Leaf and stem galls are usually more a curiosity than a problem. Most of the time, you just have to close your eyes to their presence! Or, better yet, open your eyes and learn to enjoy one of the marvels of nature!