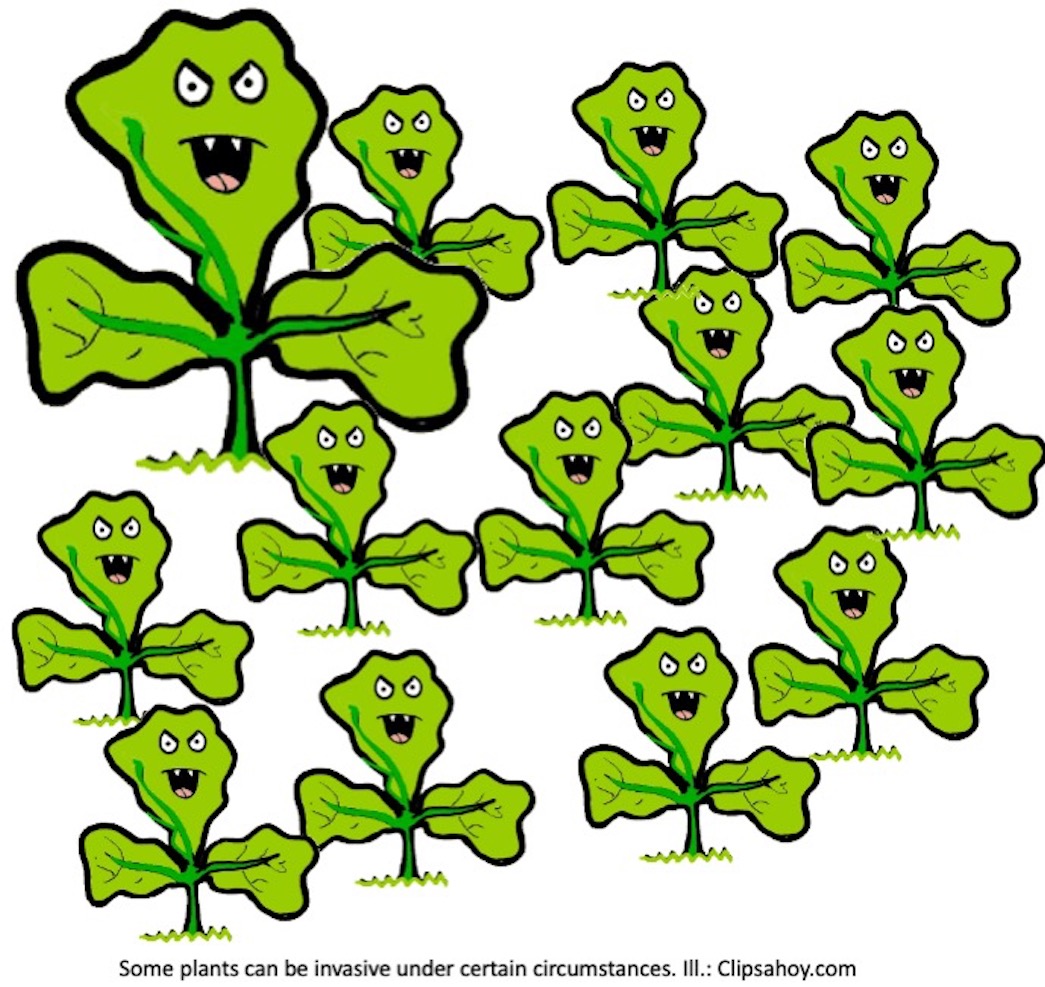 Over the last few months, usually after I’ve published a list of plants for various uses (groundcovers for shade, butterfly plants, etc.), I’ve received a few complaints from readers that one of the plants on the list is invasive and that I shouldn’t be promoting invasive plants. I think it would be worthwhile discussing what an invasive plant is to understand why that criticism is unjust.

So, What Is an Invasive Plant?

From my point of view as a gardener, an invasive plant is one that readily spreads out of control. It can be of any origin, native or exotic. For example, I planted a mayapple (Podophyllum peltatum) in my garden two decades ago and I’ve been fighting to keep it under control ever since. It’s a native plant where I live and, in fact, is considered a threatened species in my province (Quebec), but that doesn’t stop it from being a garden thug. And a plant that spreads rapidly via underground rhizomes and chokes out its competitors, isn’t that the epitome of an invasive plant?

Well, not according to certain government agencies and environmental groups. They seem to have slipped the idea “alien” or “exotic” into their definition, such that it comes out “an invasive plant is an alien plant that readily spreads out of control.”

To my gardener’s brain, that would be an “alien invasive plant” or an “exotic invasive plant.” I fail to see why a native weed can’t be considered invasive. It just doesn’t make any horticultural sense.

Government definitions, I sometimes feel, are designed to confuse, not to enlighten.

Where Is It Invasive?

Then there is the question of where the plant is invasive.

Plants are not going to spread endlessly in environments that aren’t suited to them. At best, they’ll hang on. At worst, they’ll die. So, when someone complains that butterfly bush (Buddleia davidii), for example, is invasive and should, for that reason, be removed from a list of plants gardeners can use to attract butterflies, let me point out that it is certainly not invasive everywhere. It tends to need a fairly mild, fairly dry climate. It’s certainly not invasive where I live. It doesn’t even survive the winter here (USDA zone 3) and we grow it as an annual. It can’t possibly spread.

Other plants that are invasive in some environments and not at all in others include English ivy (Hedera helix), miscanthus (Miscanthus sinensis) and tamarisk (Tamarix ramosissima). Plus, if you accept the definition that an invasive plant is necessarily an exotic one, English ivy would not be considered invasive in Europe, where it is native … even though it can readily spread there.

There are also cases of plants that could be invasive, but are generally grown as houseplants. Pothos (Epipremnum aureum), for example, could be invasive in a humid tropical climate, and so could inch plant (Tradescantia zebrina), but when they’re grown as houseplants, as they usually are, where is the harm? Plus neither is ever going to be invasive in Paris or Poughkeepsie even if, by some miracle, they found their way outdoors.

Of course, there is also the question of sterile cultivars. There are now, for example, sterile cultivars of lantana (Lantana camara) that can be safely grown in climates where lantanas can be invasive (and need I point out they can only be invasive in tropical climates?). Should I ban even sterile lantanas from any list of plants as well? Already, even fertile lantanas are not invasive for more than 90% of my readership which tends to be concentrated in temperate zones where lantanas are strictly grown as annuals.

Any Plant is Potentially Invasive

If I had to ban from my writings all plants that might possibly be invasive somewhere in the world under certain circumstances, there wouldn’t be much left, would there?

I’ll bet that if I were to produce a list of fifty “groundcover plants for shade,” given that groundcover plants tend, by their very nature, to spread a bit, at least forty of them could potentially be invasive somewhere.

And what about useful plants? Many common vegetables are potentially invasive as are a great number of herbs, cereal crops and other useful plants. Should I ban any mention of tomatoes, carrots or wheat from my writings? Where do you draw the line?

Since my blog is read all over the world (and I’m not exaggerating), I’d pretty much have to stop writing about plants if I wanted to avoid mentioning any plant that might be invasive … somewhere … sometimes.

I’m currently considering whether I shouldn’t add to all my articles the following warning: Any plant is potentially invasive. Do you think I should?

Where I live, and where you live too, I assume, there are plenty of warnings about invasive plants you shouldn’t be planting because they are locally invasive. Indeed, some may even have been banned. So, if I produce a list of plants as part of a blog, a list designed for gardeners all over the world and not just your town or state, might I suggest that you mentally subtract from possible use any plants that might be invasive in your area? It would be unfair to my readers to take plants off the list because they are invasive in California and Mexico if they aren’t invasive in Ontario and Connecticut.

I know I’m going to get a lot of flack over this article, but at some point, I have to make this clear. I love writing this blog; it’s a true passion for me, but I simply cannot allow “local interests” to influence every word I write.

And I think adding the warning “Any plant is potentially invasive” to every blog I produce is just plain silly.

16 comments on “What Is an Invasive Plant?”