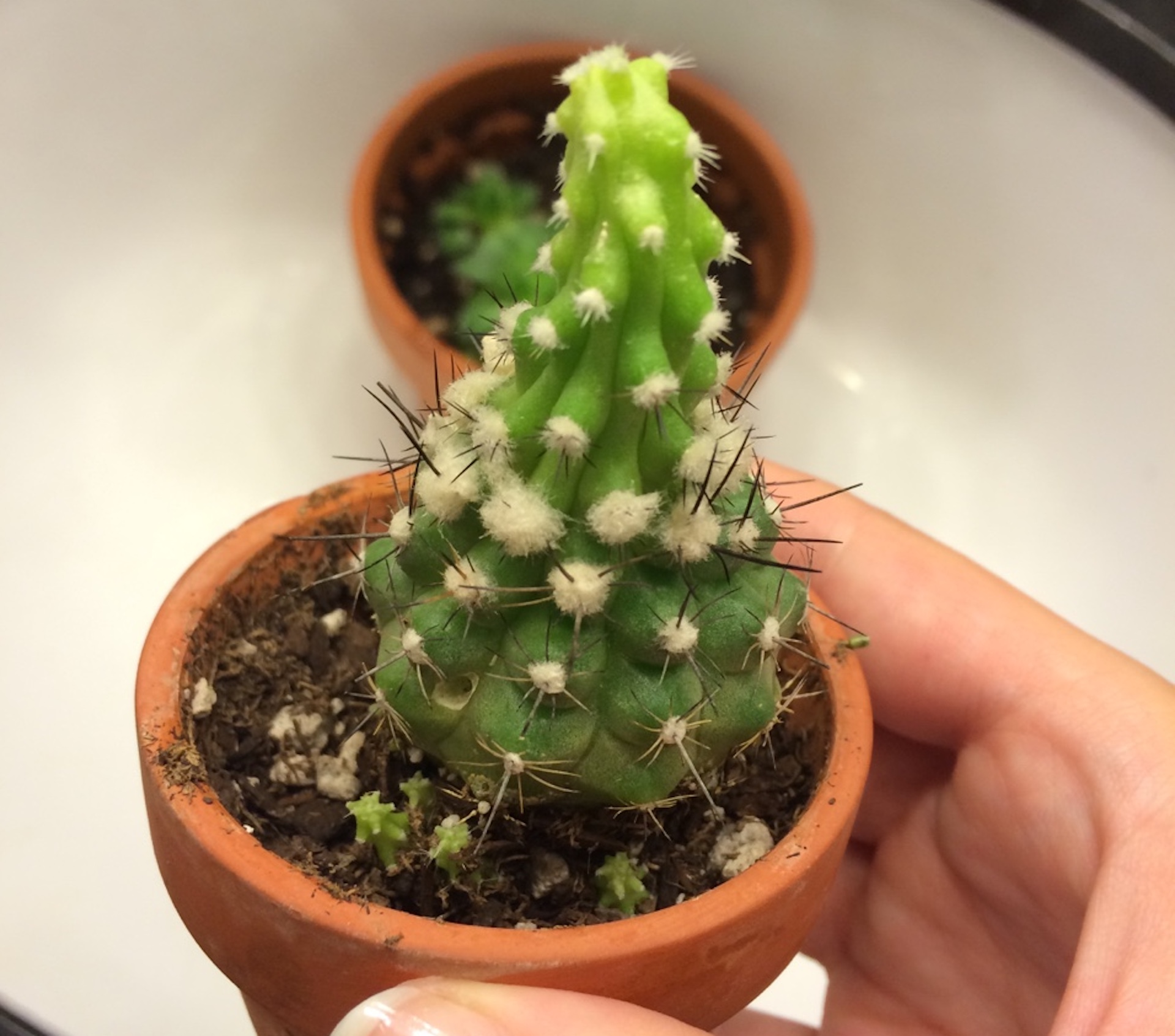 This little cactus is seriously etiolated. It should be short and rounded, not stretching and pointed.

Desert cacti grown as houseplants are more likely to lack light than other plants, because they are, for the most part, full sun plants and sunlight is not always that intense indoors. However, they have their own special way of expressing their distress.

While other plants etiolate very obviously, producing thin stems with well-spaced internodes that lean towards the light and smaller, pale green or yellow leaves, desert cactus have no leaves to compare and their thick stems look nothing like those of other plants, so it isn’t always clear to the novice that something is wrong. But cactus still do etiolate and in fact do so quite visibly … you just have to know what to look for.

When desert cactus aren’t getting enough light, their stem grows faster than normal, often leading their owner to think all is going well. After all, when a plant grows, isn’t that a good thing? But the stem produced is thinner than it should be, and tends to be almost pointed at the tip rather than broadly rounded as it should be, giving a tapered and sometimes even pyramidal effect. The stem may also be paler in color than it was before and its spines may be more widely spaced, shorter or even absent.

In the case of a prickly pear cactus (Opuntia), the pad will be elongated and tubular or tongue-shaped rather than being flat and oval.

Etiolation frequently occurs on cacti that don’t get a winter dormancy period. If they continue to grow in the winter, at least above the 30th parallel, the days will be too short for them to receive the intense illumination that most require. For that reason, any growth produced during the winter will likely be etiolated. Normally, therefore, you should encourage your desert cactus to go dormant (stop growing) during the winter, normally from October to March. Here’s how:

At really cool temperatures, too, your plant will use less water and therefore need little watering. Many cactus that are kept cold need no watering at all from October/November through March!

Even in summer, when cactus should be growing, etiolation can still occur if the plant is not getting enough light. For most desert cactus grown indoors, that means nothing less than a southern exposure.

But My Cactus is Already Etiolated!

Once a cactus has suffered from etiolation, the affected stem will never regain its normal shape. The damage will be visible for the rest of the plant’s life. You’ll even see cacti with an hourglass figure: broad at the base, narrow in the middle because it lacked light for a while, then broad at the top again, because it received better light at a later time. If this continues for several years, there will be a series of expansions and contractions, giving the stem an irregular shape whereas a healthy cactus will normally have a very even stem.

What to do? Chop off the top, below the damaged section … in the spring, that is, when the sun is more intense again. This will force the plant to produce one or more new stems with a normal shape, as they’ll now be growing in intense light.

Or learn to love your cactus’ distorted figure.

And next winter, let your cactus go dormant.

Text based on an article originally published in this blog on January 24, 2016.

1 comment on “When a Cactus Stretches for the Light”