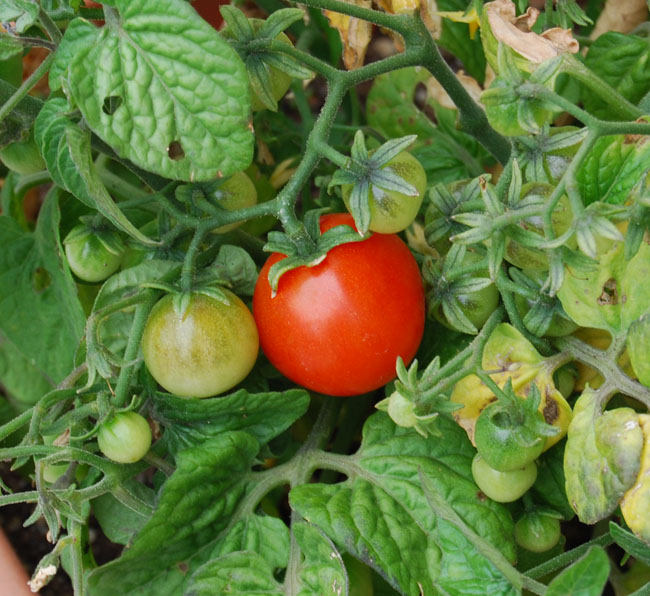 With fall approaching, you need to prepare for that final tomato harvest. Source: ww.tradewindsfruit.com

As fall approaches, days become shorter and nights become cooler. How quickly this happens and when depends on your local climate … and on weather systems that have the annoying habit of moving around. So, knowing that, and you have tomatoes (Solanum lycopersicum) still on the vine. When should you be harvesting them?

Ideally, you’d harvest them at full maturity, that is, when the fruit has taken on its final color, which can be red, pink, yellow, orange, etc., and the fruit is just a bit soft to the touch. But with frost threatening, that may not be possible. So here are a few things you can do.

About a Month Before the First Frost

Tomato flowers produced late in the season, about a month before you normally expect the first frost, will no longer have time to produce even useable green tomatoes, let alone mature ones. Start pinching off the late blooms and tiny fruits that won’t have time to mature so the remaining tomatoes will receive a bit more nutrition from the plant.

Stop fertilizing and cut back on watering as the season nears its end. Fertilizer will tend to stimulate new green growth (useless at this point in time) and take energy away from maturation. A bit of drought stress will likewise enhance maturation … and help concentrate taste.

Knowing When to Harvest

Once tomatoes reach their full size and start to change color (even if that only means they’ve gone from medium green to light green), they will ripen after harvest. This is called the “mature green” stage. They won’t be quite as tasty as tomatoes harvested fully mature, fresh off the vine, but the difference will be minimal.

Still, ideally, you’d let them continue to mature on the plant as long as the weather is appropriate, but do bring them in:

To mature not-quite-ripe tomatoes indoors, you can simply pull up the entire plant and hang it upside down in a dark basement or garage. Then pick tomatoes as they ripen.

Or harvest the individual fruits and place them in a dark spot at room temperature. (The ideal temperature for tomato ripening is 68 °F to 77 °F [20 °C to 25 °C]). Some people wrap them in newsprint, others put them in brown paper bags, others in the kitchen cupboard. All these methods are fine.

Do not place ripening tomatoes in the refrigerator: cool temperatures will stop maturation. Nor in a root cellar. Room temperatures, though, are perfect.

Nor do tomatoes need light to mature and, once harvested, will actually be more flavorful and less dry if they mature in darkness, so don’t line them up along a sunny windowsill like Grandma used to. She believed they needed sun to mature, but she was wrong on this one.

I hope these few precisions will help you decide when it’s time to harvest your tomatoes at the end of the season.

1 comment on “When to Harvest Tomatoes in the Fall”