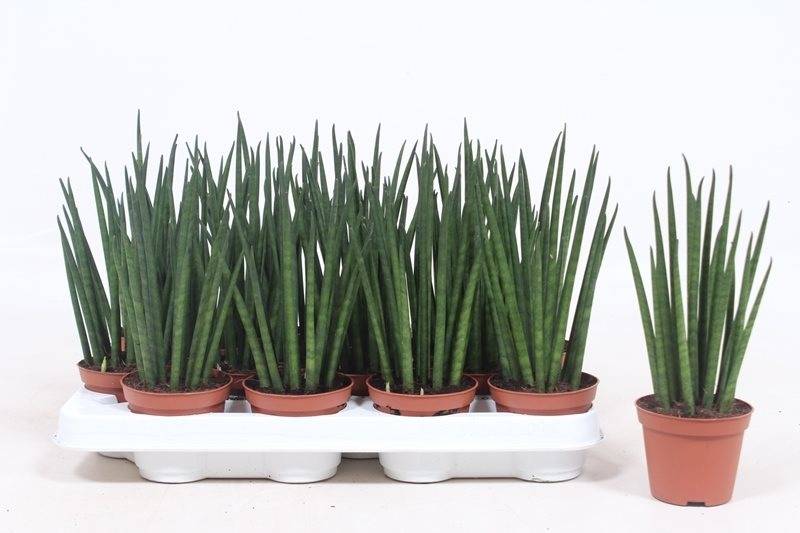 Pots of rooted sansevieria leaf cuttings as found in so many garden centres… but what is this plant’s real name? Source: http://www.florastore.com

You’ve certainly seen this plant around. In fact, it seems to be in every garden center these days. What you’ll see is a pot of short, tubular, pointed dark green leaves with lighter transverse bands and a shallow groove down the middle on one side, only about 6 to 8 inches (15 to 20 cm) tall, popping out of a pot. The leaves are usually densely clustered together, although sometimes placed so as to form a fan. And the pot isn’t always labeled … and even when it is, it’s almost never labeled correctly.

What you’re seeing are leaf cuttings of a snake plant called Sansevieria bacularis, a close relative of the similar, but much thicker-leafed cylindrical snake plant (S. cylindrica). In fact, I personally confused the two when I first saw S. bacularis cuttings for the first time. I really did take them for some sort of miniature S. cylindrica.

Since bacularis is from the Latin word baculum for rod or staff, this new plant could be called the rod-leaf snake plant.

The rod-leaf snake plant is being sold under such trade names as S. Mikado, S. Mikado Fernwood*, S. Fernwood Mikado*, S. Musica (or Musika), even spaghetti sansevieria. And it’s often being offered as belonging to one of two different Sansevieria species: S. cylindrica and S. sulcata (now S. caniculata). However, my sources (listed at the end of the article) insist that the plant in question is instead S. bacularis. If you place S. cylindrica and S. bacularis side by side, you’ll easily see the differences.

The “plant” I usually see is in fact simply a pot of rooted leaf cuttings and will eventually produce offsets leading to very different-looking plant with much taller leaves. Indeed, the rod-leaf snake plant can eventually attain 4 feet to 6 feet (1.2 m to 1.8 m) in height … after many, many years.

In many stores, you’ll find pots that haven’t sold and are transitioning from cuttings into actual plants. You can be sure the plants are S. bacularis by the purple leaf sheaths at the base, something you don’t see on other sansevierias.

Each specimen of the rod-leaf snake plant bears only one or (rarely) two very upright leaves surrounded by five to six short purplish basal sheaths. At maturity, the plant will even bloom, with stalks of purple-lined white flowers shorter than the leaf, if given bright enough light.

S. bacularis is a recent introduction: the Central African native was only officially described in 2010, but seems to have gained popularity very rapidly.

I’ve been trying find out if the cultivar names Mikado or Musica are legitimate (i.e. if they are special selections of S. bacularis) or if they are just commercial names for the plain species, but with no luck. If anyone has more information on the history behind this plant and its multiple names, please let me know. I’ll gladly update this article to include any accurate information.

*Then comes the confusing situation of sansevieria plants labeled Fernwood Mikado or Mikado Fernwood. There is a real S. ‘Fernwood’ (S. parva x S. suffruticosa), developed by the late hybridizer Rogers Weld of Fernwood Nursery in California, but it’s is a very different plant, with narrow leaves that are arching rather than straight and upright and flattened at the base rather than cylindrical, plus each plant produces several leaves, not just one or two. You could mistake a pot of ‘Fernwood’ leaf cuttings for S. bacularis, but certainly not an established plant.

What could be easier? Avoid frost and water it occasionally and it will probably grow!

OK, that was a bit simplistic, but still fairly accurate. Here’s more detail:

Salespeople seem to be telling customers that the rod-leaf snake plant is a shade plant, but don’t believe them. True enough, while it will “hold” in shade, it certainly won’t thrive there. It prefers bright light with some full sun. In fact, full sun all year is just fine, at least at higher latitudes. Under poor light, the leaves on mature specimens will be bendy and will require staking.

The rod-leaf snake plant is highly drought tolerant. Water well, then let dry. If you have to go away for a few months, just water it before you leave. It will be parched, but alive when you get back and will soon recover with judicious watering.

It tolerates both dry and humid air and any temperature above freezing if the soil is dry. If the soil is moist, keep the temperature above 45 °F (7 °C). Plant it in a well-drained mix (you might want to add ¼ parakeet gravel to your usual houseplant mix for extra weight). A heavy pot will likely be necessary to keep mature specimens from keeling over. Outside, it will grow best in arid, tropical climates, although indoor specimens will do fine outdoors for the summer in colder climes.

You can fertilize this plant or not: it doesn’t really seem to care.

And you can multiply the rod-leaf snake plant by division or leaf cuttings. In the latter case, just chop the top off a leaf (that will put an end to its growth, though!) and stick it in a pot of growing mix, watering very occasionally. It will root and eventually produce a new plant, although this can sometimes take a year or more.

The rod-leaf snake plant (Sansevieria baccularis). You’ve seen it and maybe even grow it, and now you can finally put a name on it!

2 comments on “Naming a Mystery Plant”