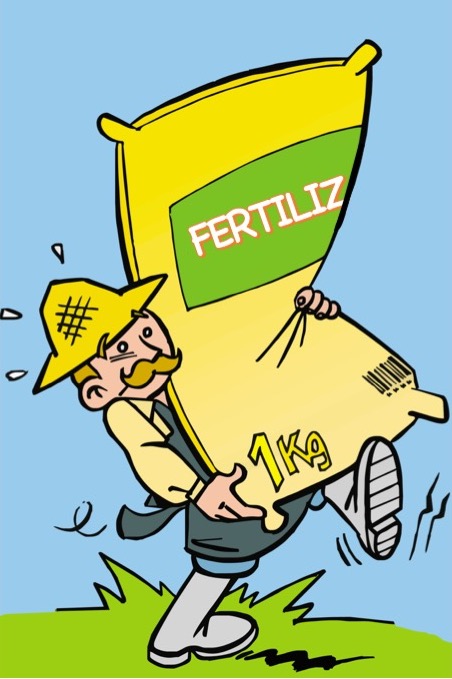 A fertilizer, also called plant food, is composed of minerals plants need for their growth. In a soil where compost or manure is added regularly (both are also rich in minerals), a fertilizer isn’t always necessary. That may also be the case in areas where the previous year’s leaves are left to decompose on the spot. However, in gardening situations where you regularly take minerals away (by harvesting crops, by cutting back perennials in the fall, by raking up and removing fall leaves and lawn clippings, etc.), fertilizers are usually required. That’s why “take-away” cultures, like vegetable gardens and lawns, are usually needier of fertilizer than plantings that are mostly allowed to grow on their own, like shrub borders and groundcovers.

Potted plants probably need the most fertilizer of all, because their confined roots are simply not able to “reach out and grab” minerals in their surroundings the way they’re designed to; plus they are also prone to leaching due to rain and watering, meaning minerals you do add are often quickly washed away.

In most countries, by law all commercial fertilizers must display in large type three figures that represent the percentage of nitrogen (N), phosphorus (P)and potassium (K)*, called macronutrients or major nutrients, that they contain. An 11-12-9 fertilizer would therefore contain 11% nitrogen, 12% phosphorus and 9% potassium.

*In fact, the percentages are of N, P2O5 and K2O, but by convention, NPK is used.

It is usually said that nitrogen is used to stimulate green growth. Thus, a fertilizer rich in nitrogen would be useful for seedlings and leafy plants (foliage house plants, conifers, leafy vegetables, etc.). But that simplifies things far too much: nitrogen is simply the most vital nutrient in plant growth and is used by plants in practically everything stage of their development.

Add too much nitrogen, though, and you could end up with lush, abundant leaf growth, few to no flowers, disease infestations and insect invasions (aphids, for example, are renowned for their love of nitrogen-boosted plants).

The fact remains, though, that nitrogen is the element that is most often missing in garden soils and pretty much every gardener will have to return nitrogen to the soil in one form or another.

Phosphorus is said to promote root development and also stimulate flowering and fruiting. This isn’t precisely true (phosphorous is in fact used in all sorts of ways by plants), but neither is it entirely false. Based on this belief, phosphorus-rich fertilizers are often sold as flower fertilizers, vegetable fertilizers or rooting fertilizers.

On the downside, fertilizers too rich in phosphorus (more than 15%) can negatively affect the establishment of mycorrhizal fungi, beneficial fungi that whose role is also to seek out and absorb phosphorous from the soil. And excess phosphorous flowing into bodies of water is causing environmental problems worldwide. For those reasons, you’ll be seeing more and more fertilizers with little to no phosphorous … and that’s fine where phosphorous is abundant in the soil, as indeed it often is.

Finally, the role of potassium seems primarily to promoting strong stem growth, flowering and fruiting. The commonly held belief that potassium is important in helping in plants resist bad weather, diseases and parasites is probably a bit exaggerated, but, like phosphorous and nitrogen, potassium is so important to healthy plant growth that it is very hard to draw a clear line as to its specific effects.

The belief that potassium boosts resistance has led to potassium-rich fertilizer often being recommended for vegetables and as a fall fertilizer to help plants better tolerate winter conditions.

A fertilizer that includes all three macronutrients (nitrogen, phosphorus, potassium) is said to be complete. If only one or two of these nutrients are present, it is said to be incomplete. Of course, an incomplete fertilizer can still be a good product. For example, if soluble forms of phosphorus and potassium are already present in sufficient quantities in the soil, which is more often the case than many gardeners think, why add more? It may be helpful to have a soil test done to find out if these two nutrients are missing or abundant in your garden soil.

As for nitrogen, pretty much every garden plant will need nitrogen to grow well: it just isn’t very persistent in soil.

Three other elements are of vital importance to plants and even form the basis of their cell development: carbon, hydrogen and oxygen. However, plants absorb them from water or air. You don’t need to add them in the form of fertilizer.

In addition to macronutrients (NPK), plants need secondary nutrients in fairly substantial quantities. Again, they are often already present in garden soils, but when they aren’t, and if you don’t add them in some form or another, their absence can cause nutrient deficiencies, often indicated by a slow growth and yellowing or reddening of the foliage.

The three secondary nutrients are calcium, magnesium and sulfur. Because of their importance, their presence is often highlighted on the label.

Scientists are still arguing about which micronutrients, also called minor nutrients or trace elements, are actually needed for plant growth, but most accept the following: boron, chlorine, manganese, iron, nickel, copper, zinc and molybdenum. Some specialists add selenium and iodine to that list. And it would appear that some plants need silicon, sodium, cobalt or vanadium.

Micronutrients are only needed in very, very small amounts, yet that doesn’t mean they aren’t important. Without them, plants will suffer serious deficiencies leading to poor, misshapen growth and considerably lower yields.

In general, synthetic fertilizers (also known as chemical fertilizers) are very rich in macronutrients, with rates exceeding 15%. 15-30-15, for example, is a synthetic fertilizer. On the other hand, they rarely contain the full range of secondary nutrients and micronutrients. As their name suggests, they are derived from chemical compounds and are assembled artificially. They’re designed to be absorbed directly by plant roots.

Organic fertilizers are derived from natural sources, such as crushed rock, vegetable waste and manures. They are less concentrated than most synthetic fertilizers and rarely do their nutrients exceed a concentration of 14%. A 5-7-8 or 2-3-1 fertilizer would probably be organic. Most organic fertilizers contain a good deal of secondary nutrients and micronutrients. Some, such as seaweed fertilizer and fish emulsion, contain essentially all the nutrients (macro-, secondary and micro-) that plants need for growth and are therefore useful for curing or preventing nutrient deficiencies.

Organic fertilizers are not directly assimilable by plant roots. Instead, they have to be broken down first by soil micro-organisms. They’re often said to “feed the soil,” then the soil “feeds” the plant.

Many gardeners prefer organic fertilizers because they are generally less polluting than synthetic fertilizers.

These fertilizers are composed in such a way as to release their minerals slowly, over a whole season, rather than all at the same time. Thus, a single annual spring application will suffice. There are both organic and synthetic slow-release fertilizers.

So, make your life easier! In most cases, the only fertilizer you’ll need for all your plants is a single all-purpose slow-release organic fertilizer.