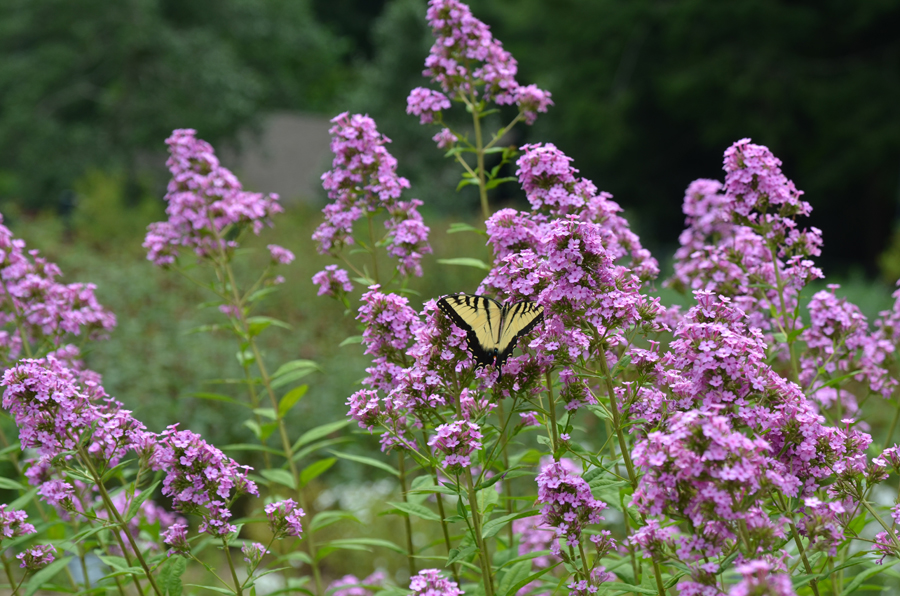 I grow a lot of plants that attract butterflies, but my favorite is a garden phlox called ‘Jeana’ (Phlox paniculata ‘Jeana’). It just seems to outdo, for butterfly attractiveness, all the others; plus it is easily the longest-blooming phlox in my garden: from early August to early October (mid-July to early September in milder climates). Plus, it is disease resistant (no powdery mildew has ever been seen on this one!) and easy to grow.

And I’m not the only one who says so. Although I bought this plant on a whim in a local garden center, simply based on its striking appearance, it turned out I was buying a star.

As I was researching this article, I came across a report from Mt Cuba Center, a wonderful public garden in Hockessin, Delaware, that studied 94 phlox cultivars over a 3-year period and it concluded that ‘Jeanna’ was by far the best phlox at attracting butterflies. In fact, it was rated the best garden phlox overall!

Mt Cuba Center even created a Pollinator Watch Team specifically to understand why ‘Jeana’ attracts so many more butterflies than other phlox. Over two years, they counted 539 butterfly visits to ‘Jeana’ compared to 117 visits to the next-most popular cultivar, Phlox paniculata ‘Lavelle’.

Oddly, ‘Jeana’ is not highly scented (in fact, I can smell nothing), so it’s not perfume that’s attracting our winged friends. And an analysis of its nectar at Mt. Cuba showed it to be no different than that of other phlox. The Pollinator Watch Team concluded that it was probably the density of the flowers that made it so attractive to butterflies. There are many more flowers in a cluster than in typical garden phlox, up to 100, so butterflies can visit a lot more flowers in less time.

I think, too, it would be interesting to test how quickly it renews its nectar after a butterfly visit drains the flower. My personal theory is that it probably gushes nectar like a fountain, explaining why butterflies come back again and again.

And while butterflies adore it, in my garden, it attracts its fair share of hummingbirds, too. Often you see both on the same plant at the same time.

Phlox paniculata ‘Jeana’ is immediately distinguishable from any other phlox because of the size of its panicles (flower clusters)—6 inches/15 cm across!—, the huge number flowers per panicle … and their small size. The petals are half the size of other garden phloxes and the tube behind the flower is shorter too. It’s the mass of flowers makes for its impressive appearance! Individually, the small flowers are out and out wimpy!

As for color, what can I say: it is simply pink, phlox pink, the color of wild P. paniculata flowers, with a darker eye. After all, ‘Jeana’ is not a hybrid, but was chosen from the wild. It was discovered by Jeana Prewitt from a large P. paniculata colony on the Harpeth River in Nashville, Tennessee.

And ‘Jeana’ is a big one. Although the plant label on my plant gave its height as 2 to 4 feet (60-120 cm), Mt. Cuba lists it as 5 feet (150 cm). In my garden, it’s that tall too: a head above any other phlox. It is a sturdy, upright, conical perennial forming a dense clump of narrow, pointed deep green leaves to 4″ (10 cm) long with that characteristic huge cluster of tiny pink flowers on top.

That said, I recently saw a severely drought-stressed ‘Jeana’ that really was only 2 feet (60 cm) high. Although it was immediately recognizable due to its enormous head of small flowers (‘Jeana’ looks like no other phlox!), there was a label near the plant confirming its name. So, expect some variability in ‘Jeana’s height.

All you need are typical garden conditions to grow ‘Jeana’ to perfection: full sun (partial shade is acceptable) and good, well-drained garden soil. It will even grow in clay soils, although a lighter soil is better. Once established, it is reluctantly drought tolerant, but will be much happier if you water it during times of drought. In spite of its height, I’ve seen no signs of flopping. And it’s said to be hardy from zones 4 to 8. I suspect it would be hardy in zone 3 too.

Besides being extremely resistant to powdery mildew, it will tolerate being grown under black walnuts (Juglans nigra), resists deer and rabbits and is not normally prone to insect damage. I’m not sure about Japanese beetle damage, though (there are none where I live, so I can’t check): if any reader has information on that subject, I’d appreciate knowing and will update the article as needed.

If you like it, ‘Jeana’ is easily multiplied by cuttings or division … and makes a great cut flower.

Hey, ‘Jeana’ is just about the perfect garden phlox … except for the absence of perfume, which is a bit of a downer. Well, I suppose you can’t have everything!

I heartily recommend ‘Jeana’, available in better garden centers across North America and soon, one would hope, elsewhere in the world. Try it and see!

2 comments on “My Favorite Butterfly Magnet”