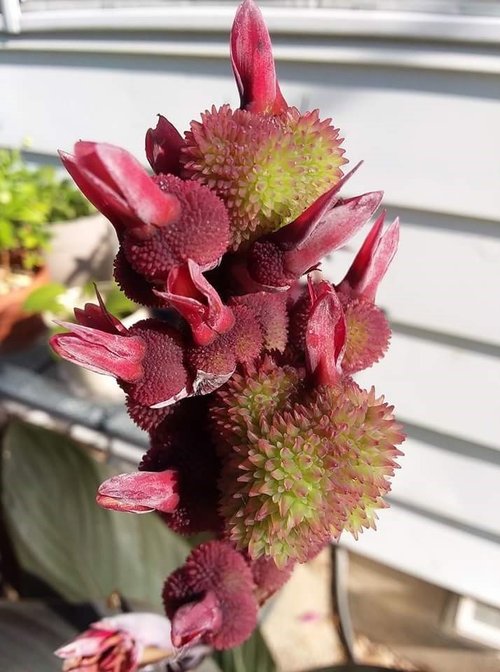 Prickly seed capsules on a canna. Quite attractive, don’t you think? Photo: http://www.houzz.com

Every year, I receive messages from gardeners worried about the spiky round growths their cannas are producing. One said she’d grown cannas (Canna cvs) for years and had never noticed this phenomenon before. Well, that’s not my experience. It happens to almost all my cannas after they bloom.

The fact is that the prickly growths are not symptoms of a disease or pest or indeed a problem of any kind. They are simply seed capsules. Cannas, like the vast majority of plants, produce seed after they flower, at least, if they are pollinated. It just happens that canna seed capsules are rather large and covered with small spines, probably designed to protect the seeds inside from predators. Castor beans (Ricinus communis) produce similar prickly capsules.

There are two things you can do when a canna begins to produce seed capsules: either remove them or let them mature.

If you adhere to the theory that seed production saps a plant’s energy and that it’s best to remove the faded flowers of any plant to help it keep performing, go ahead and remove the seed capsules.

Of course, while this may be true for a few plants (although not nearly as many as you might think), it doesn’t really apply to cannas. Even though cannas seem to grow in clumps, each individual canna stem is actually a separate plant growing from its own underground rhizome. After it blooms, it dies … slowly. So whether you remove the capsules or not doesn’t change anything.

Personally, I find the capsules attractive. Plus I’m lazy. So I usually leave the seed capsules in place until fall.

And that’s the other option: simply letting them mature. They’ll turn brown and open after a few weeks, revealing the large, round, black seeds inside. They are so hard that cannas used to be called Indian shot, because it is said that South and Central American peoples formerly used them instead of lead shot in their guns. (I have no proof that is actually true, but it makes a great legend.)

What to Do With the Seeds?

You can harvest canna seeds when the capsules open, then store them indoors over the fall and early winter in a warm, dry spot for sowing next spring. Do note that modern cannas are all hybrids and thus the seeds you sow will not give plants identical to the parent plant. Still, you ought to get some very pretty plants with flowers of various colors.

For a head start on the growing season, sow canna seeds in February in moist soil and put them in a warm spot (71-75˚F/21-24˚C). The seeds germinate very irregularly due to the seed coat’s hardness, usually over 3 to 4 weeks. One way to speed up germination is to soak them in a thermos of hot water for 24 hours before sowing to soften up the seed coat.

Once they sprout, though, canna seedlings grow very quickly and will give you nice big plants even in the first year. However, they won’t necessarily bloom the first year, especially the taller varieties. They should bloom the second year, though: just bring the rhizomes indoors in the fall and store them in a dry, frost-free spot for the winter, then replant them in the following spring. They should bloom abundantly in year 2.

Adapted from an article originally published on September 2, 2015.

3 comments on “Cannas With Prickly Balls!”