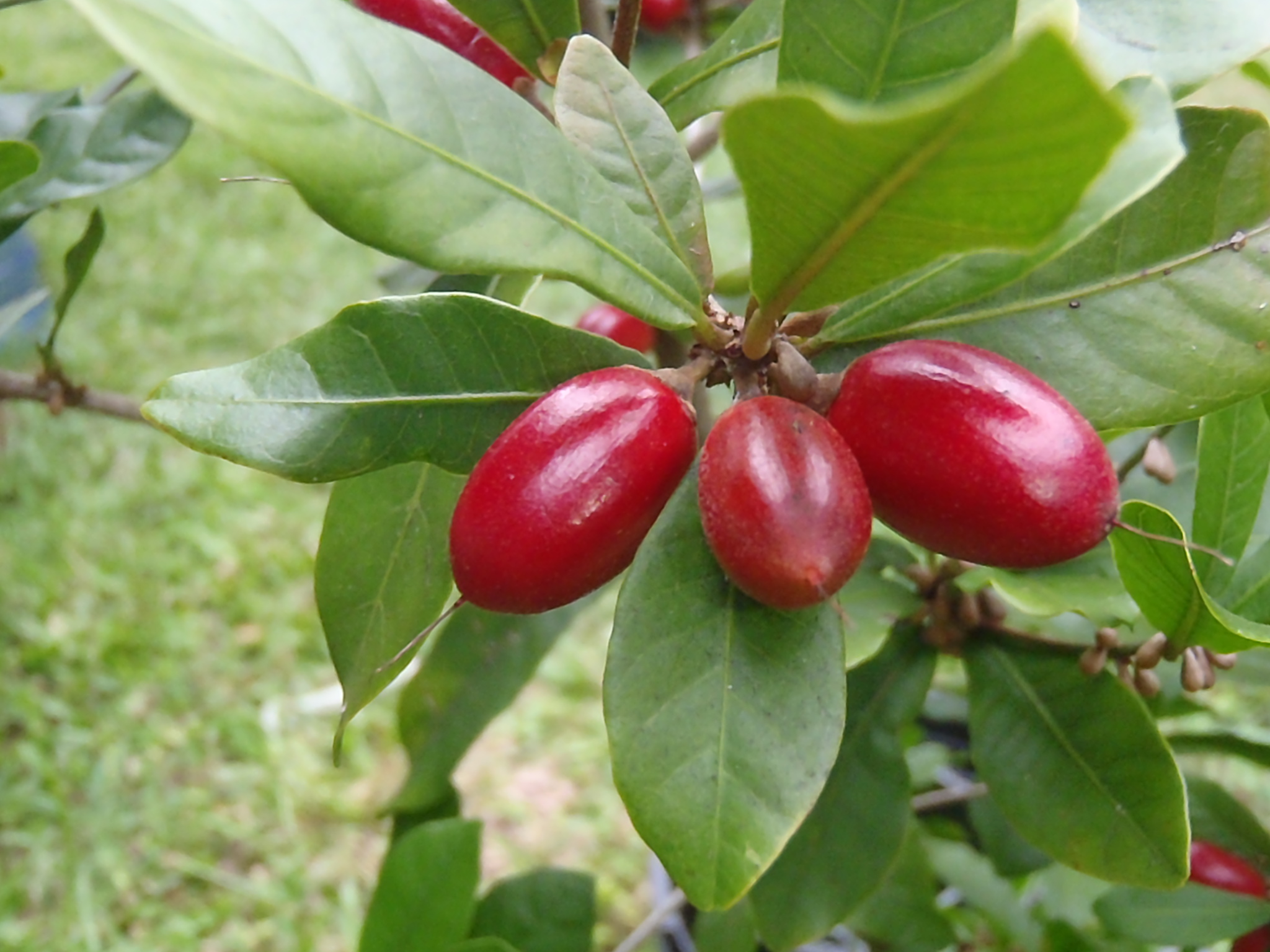 I don’t bandy the word “miracle” about unnecessarily, but there is indeed something quite special about the berry of the plant known as miracle fruit (Synsepalum dulciferum). The small egg-shaped red berry is not particularly sweet on its own, though quite edible. It’s what happens afterwards that is surprising. It contains a glycoprotein called miraculin (yes, that really is its name!) that binds to your taste buds. Then, if you eat something sour or bitter, it activates the sweet receptors, resulting in the perception of a sweet taste.

I once brought some berries to a lecture I was giving about unusual houseplants and had a few volunteers try it (I only had 7 ripe berries to share). I had them munch on the fruit, then bite into a slice of lemon … the sweetest lemon they had ever tasted! You should have seen the amazed look on their faces! I could have had them try radishes, pickles, hot pepper sauce, mustard, grapefruit or beer. (To me, beer drunk after chewing on a miracle berry tastes like champagne!)

Those strawberries you paid a fortune for just aren’t sweet enough? Chew on a miracle fruit and they’ll be heavenly! Sneaking a miracle fruit into your pocket would be the ideal trick when you’re invited over for a meal at your mother-in-law’s whose cooking you simply cannot stand. Or have a child chew on a berry (remove the seed first to prevent any risk of choking) before giving them any bitter medicine.

The effect lasts of miraculin about 20 to 30 minutes, the time it takes your saliva to remove the protein.

There is nothing new about the miracle fruit: its effect has been known for centuries. It’s native to West Africa and generations of West Africans have picked and chewed the berries before meals. The Chevalier des Marchais, cartographer and slave ship captain, wrote about it as early as 1724. Various attempts to commercialize it have generally failed, but it is possible to buy miracle berry fruit tablets on the Internet. But, let’s face it, tablets are nothing compared to the real thing!

Miracle fruit is an evergreen shrub about 6 to 15 feet (1.8 to 4.5 m) high outdoors, though rarely more than 5 feet (1.5 m) indoors, with dense elongated smooth green leaves clustered at the ends of its branches. The tiny ¼ inch (6 mm) tubular brown to white flowers appear sporadically in clusters throughout the year and are not too noticeable. The 1-inch (2.5 cm) red berries, though, are quite striking, looking a lot like coffee berries and with a similar size seed inside (which you can discretely spit out), although the two plants are not related. (Coffea arabica is in the Rubiaceae family, miracle fruit in the Sapotaceae one.)

Miracle fruit is a tropical shrub. In temperate climates, you’ll need to grow it indoors, at least from fall through spring. It likes an acid soil (mix ½ peat moss into your usual houseplant mix), so won’t do well in the alkaline soils of California, but it positively thrives in the acid ones of Florida.

Growing mine indoors, I struggled at first: it seems to need a lot of humidity and the 40 to 50% relative humidity I usually manage to offer just wasn’t enough. So, I learned to stuff it into a large transparent bag for the winter, using stakes to lift the bag above the leaves. With this personal greenhouse and humidity close to 100% from October to March, it now breezes through the winter, probably thinking itself back home in West Africa.

In the wild, it grows in partial shade. Indoors, where the sun’s strength is seriously diminished, I suggest giving it as much sun as you can while avoiding the extreme heat of noon and early afternoon. It prefers tropical temperatures year-round, so avoid temperatures below 60ºF (15ºC) if you can. Established plants are said to tolerate light frost … but they won’t like it!

Watering is “normal”: allow the soil to dry slightly, then water abundantly. I just use plain municipal tap water, direct from the faucet. To keep the pH down, I fertilize with a soluble acidifying fertilizer (one sold for rhododendrons and conifers) at one eighth of the recommended rate from spring to early fall.

Theoretically, the flowers self-pollinate, but just to make sure, I move a little pollen around with an artist’s brush if the plant is indoors at the time of blooming. While it’s outdoors, I let insects do their job. Under my conditions, I usually get two flushes of fruit per year, but other gardeners report 3 or 4. And I’m not talking about bushels of fruit: more like handfuls. I’ve seen this plant in tropical climates and even there it seems to be a rather sparse bearer.

I once found a few scale insects on my plant (I immediately pruned off the affected branch and thus apparently nipped the infestation in the bud) and suspect mealybugs would also like it. Spider mites too, if the air is too dry.

I’ve never tried multiplying my plant (I only have room for one!), but it is apparently fairly easy to grow from cuttings (use rooting hormone) or fresh seeds. Seed-grown plants, though, are probably many years away from producing berries.

Where to Find It

Sometimes miracle fruit plants show up in garden centers: if so, grab one without delay: it’s a fairly rare occurrence.

In the US, you can order a plant via Amazon or from Logee’s or Top Tropicals. In Canada, I got my plant from FloraExotica. In Europe, try AlsaGarden; in Australia, LushPlants.

But don’t order this heat-loving plant in winter: wait until balmier weather arrives!

4 comments on “Grow Your Own Miracle Fruit”