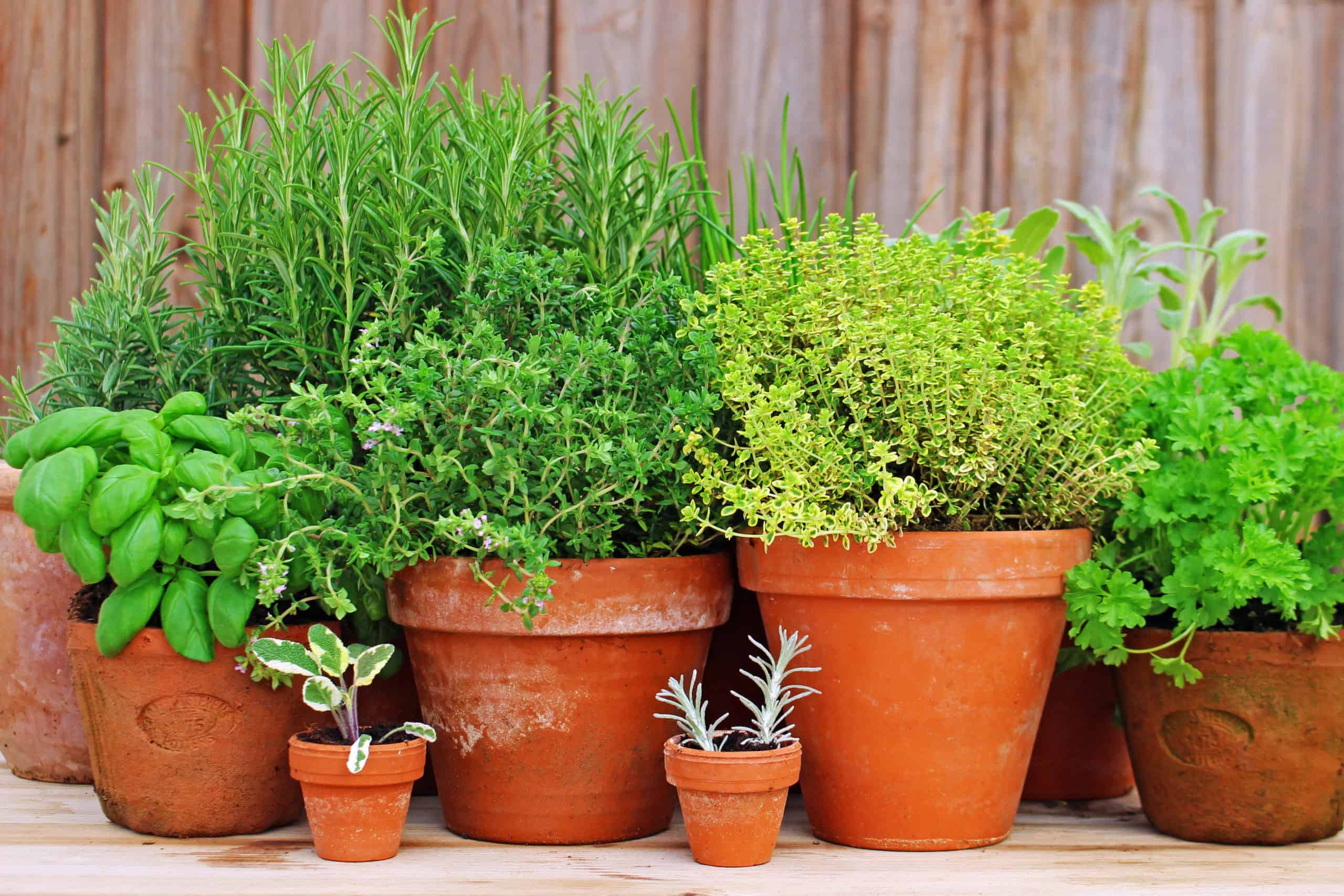 You can grow almost any herb in a pot. Photo: harvesttotable.com

Traditionally, herbs have always been grown in the vegetable garden. But fewer people have an actual in-ground vegetable garden any more. Or their vegetable garden is in a community garden, far from the table. As a result, although fresh herbs remain popular, they end up not used as much as they should be.

The solution? Grow herbs in pots on a balcony, deck or even in a flower box fixed directly under the kitchen window, somewhere they’re always within reach and therefore easier to use in day-to-day cooking.

Here are five herbs that are easy to grow in pots and that will give you something to spice up your meals throughout the summer and even much of the fall.

A fast-growing plant, basil germinates and grows quickly from seed, but if you’re not yet into growing from seed, no problem: potted specimens are widely available from late spring through summer.

The origin of this plant is lost in the mists of time, but it is suspected that it comes from Central Africa, then somehow made it to India before finally conquering Italy in the 15th century.

Its Central African origins influence how you grow it, though, as this plant just hates the cold. Don’t even think of putting it outdoors until days are toasty and nights are warm.

Basil prefers full sun. It tolerates drought to a certain degree, but will be more productive if it’s kept at least a little humid at all times.

Sometimes basil blackens and dies back all of a sudden in the middle of the summer. The cause is fusarium wilt, a disease caused by contaminated seeds or plants grown in unproperly cleaned greenhouses. Therefore, only buy your plants from a reputable dealer. You can also buy seeds of cultivars that are naturally resistant to the disease, like ‘Nufar’, ‘Envigor’, ‘Everleaf’ and ‘Stella’.

Rather than making your basil plant die an agonizing by bringing it indoors for the winter, just let the cold kill it and start new plants by seed in spring … in a warm spot!

It is one of the few herbs hardy enough to spend the winter outside in a pot, even in the coldest climates. So, you can grow this perennial outdoors in the same pot year after year.

Chives prefers sun, but tolerates partial shade. You can let the soil dry out a bit before watering it. This is certainly one of the easiest herbs to grow and it’s very tolerant of neglect.

It’s the only common herb that grows well both indoors and out, so it can be grown as an outdoor plant in the summer and a houseplant in the winter. In mild climates (USDA zones 8 to 10), you can even grow it outdoors all year around! Over time, bay laurel will slowly turn into a tree, but it’s generally sold as a small shrub.

Bay prefers sun or partial shade and well-drained soil. In summer, you can keep its soil fairly moist; in winter, in the house, let it dry a little. Please note that its growth is very slow and—before you ask the question!—no, extra fertilizer will not make it grow any faster!

Inspect your plant carefully before buying your plant, though, as it is prone to scale insects. They look like little brown shields on the leaves and stems and lead the plant to a slow and lingering death.

Slow from seed, but after that, parsley is easy to grow and very productive. For faster results, just skip the “sow it yourself” part and buy a plant or two.

Parsley grows well in sun or partial shade. Keep the soil a bit moist at all times.

This biennial is grown as an annual, because it becomes bitter the second year as it approaches flowering. Sometimes people bring it indoors for the winter, but that almost constitutes cruel and unusual punishment, as the poor plant barely remains alive under the low light typical of an indoor windowsill in winter.

This small subshrub is fairly slow growing at first, so it’s better to buy a plant than try growing it from seed. It prefers full sun, but tolerates partial shade. Water it moderately because it can tolerate a little drought.

If you want to keep this plant over the winter in a pot, you need to live in a mild climate (USDA zones 7 to 10). It will freeze in colder climates, yet doesn’t thrive indoors on a windowsill either. It’s hardier when planted in the garden, to zone 5.

In addition to regular garden sage with its grayish-green leaves, there are cultivars available with purple, golden and variegated leaves that are just as tasty as the original.

And there you go! Five herbs that anyone can grow! Get your balcony garden going right away!

2 comments on “5 Easy Herbs for the Balcony”