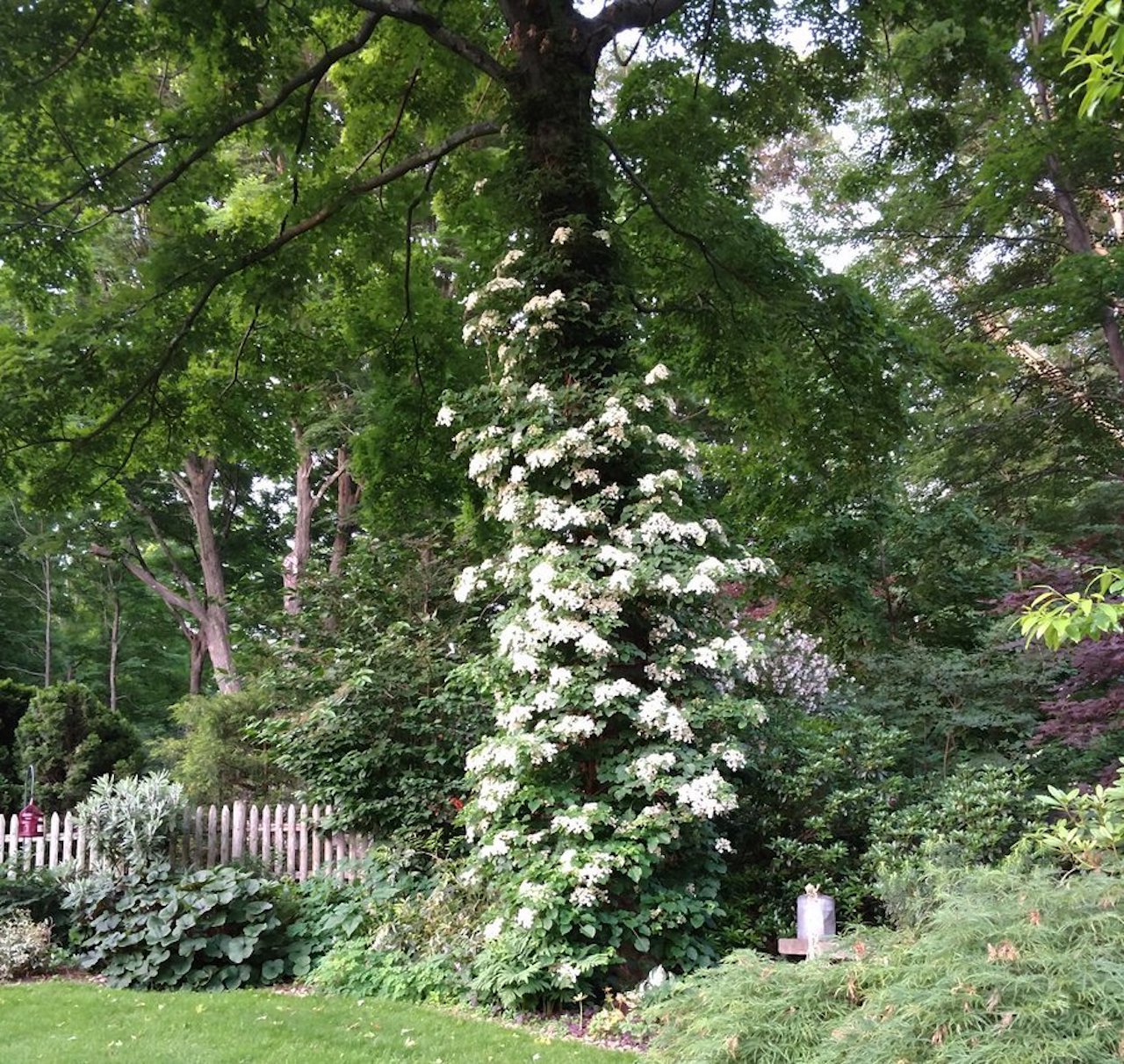 A climbing hydrangea (Hydrangea petiolaris) growing on a tree: nothing could be more natural! Photo: Dave Epstein, @growingwisdom

What is it that gardeners have against letting climbing plants—vines if you prefer—clamber into trees? This is how most of them live in the wild, yet in the gardening world, at least in North America, such a use seems to be considered an anathema. (Brits seem to be more open to the idea while, if you want to see beautiful marriages of climbing plants and trees, try visiting German gardens. German gardeners seem to fully understand the concept!)

True enough, in certain public gardens, there are magnificent specimens of trees decorated with climbing hydrangeas, climbing honeysuckles or clematis, but even so, few gardeners seem to think that the concept could be adapted to a home garden. The belief seems to be that a climber can’t be grown anywhere other than on a trellis, arbor or pergola. Letting a climbing plant grow up a tree, claim many gardening websites, will kill it.

Well, that’s nonsense! True enough, you wouldn’t let an overly aggressive climber loose on a small or weak tree (more on that below), but then, when you garden, you wouldn’t plant a dominating, weedy plant next to a fragile, rare specimen, would you? Gardening is all about marking careful matches. And there are good combos of trees and climbers and bad ones.

Which Climbers to Choose?

Self-clinging climbers—ones with adhesive pads or aerial roots (such as Virginia creeper, Boston ivy, climbing hydrangea, and English ivy)—are the easiest to use this way, although they tend to be quite dominant climbers, best limited to large, fully grown trees. The advantage is that they will climb all on their own, because they cling onto any rough surface and, in fact, specifically evolved to fasten onto bark.

The twining stems of certain other climbers, such as bittersweet (Celastrus spp.) and Dutchman’s pipe (Aristolochia macrophylla), form very broad loops and can thus encircle a tree trunk quite wide in girth, allowing them to therefore climb even massive trees with any other help.

That isn’t the case with all twining climbers. Many, such as clematis and most annual climbers, like scarlet runner bean (Phaseolus coccineus) and morning glories (various species of Ipomea), can only wrap themselves around fairly slim supports: twine, netting, moderately thin branches, etc. Planted at the base of a tree, they often try to climb, then lose hold and slide down: not exactly the effect you want! You need to provide them with wire netting or some sort of cord to wrap around until they reach at least the lower branches of the tree. From there on in, though, thanks to the thinner branches found there, they can then start to climb on their own.

Finally, there are climbing roses (Rosa spp.). As most gardeners already know, they really don’t climb on their own. You always need to tie their rather rigid stems to their support to start them off in the right direction, even when you grow them on a trellis. The situation is no different when you want them to grow up a tree. Afterwards, as with weaker twining climbers, once their branches start to mingle with the tree’s branches, they’ll no longer need your help.

Helpful Hint: When looking for climbing roses to grow on a tree, consider rambling roses. Not that well known in North America, they have taller, more flexible stems than classical climbing roses and are the best types for training up a tree. You’ll most likely find them in specialist rose nurseries.

How to Plant a Climber Under a Tree

Small trees rarely have much of a root system and if you want to plant a climber near their base, that’s usually quite doable. However, if you want to plant a climber at the base of a large, well-established tree, planting at its base is going to be very difficult. Huge roots will likely thwart your efforts at digging a suitable hole; plus conditions will be too dark, dry, and low in nutrients to give the climber a good head start. So, cheat a bit and plant the climber out close to the tree’s drip line (the outer edge of its leafy canopy), where roots will be less dominant and ressources, more abundant. Then direct the long stems toward the trunk, securing them to the ground with stakes if you have to (they’ll usually root into the soil there on their own once they start growing). Once they make contact with the trunk, you’ll see that most of them will start to climb with surprising vigor, as if they had waited all their life for a chance to climb … which is, of course, exactly the situation.

Obviously, you have to be logical in your choice of climber.

If a climber is invasive in your area, such as kudzu (Pueraria montana lobata), Japanese honeysuckle (Lonicera japonica), or Oriental bittersweet (Celastrus orbicularis), all considered undesirable invasive species in many parts of America and Europe; obviously, they shouldn’t be planted. And English ivy (Hedera helix), perfectly acceptable in Europe where it’s native, cannot be recommended in those parts of North America where it self-sows too aggressively. But there are dozens of other climbing plants you can use that nobody considers invasive.

Also, only plant varieties that are well suited to your climate, especially your hardiness zone, and your growing conditions. Not much will come of planting a tropical climber like bougainvillea (Bougainvillea spp.) in the cold North!

However, if you pick carefully, why not plant climbing plants to give your trees a bit of punch? Two plants sharing one space? Ma Nature does it all the time, so why shouldn’t you?

Adapted from an article first published on February 24, 2015.

16 comments on “Yes, You Can Let Vines Climb Trees!”