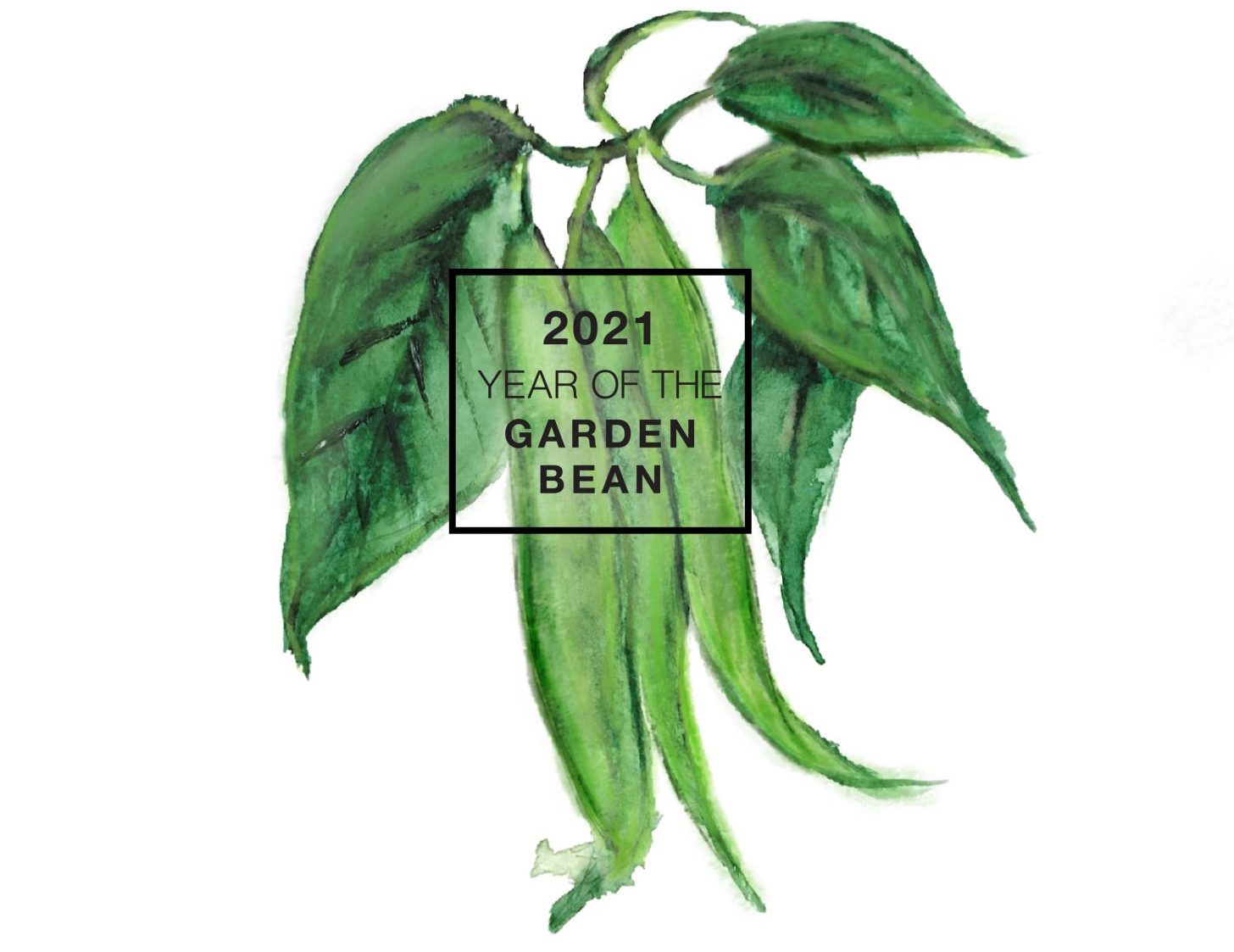 Every year, the National Garden Bureau, a non-profit organization promoting the pleasures of home gardening, selects one annual, one perennial, one vegetable, one shrub and one bulb to celebrate. It’s a great way to discover a new plant or to learn a bit more about a plant you may already be growing.

Let’s look at the vegetable chosen for 2021, the garden bean.

There are many species of beans in cultivation around the world, yet it is the common garden bean, Phaseolus vulgaris, that takes on celebrity status as National Garden Bureau’s vegetable focus for 2021.

One of the earliest cultivated plants, garden beans were domesticated somewhere in central Mexico around 6,000 BCE, then spread both north and south, into South America, as an original member of the original “Three-Sisters”—an interplanting of three domesticated crops: maize, winter squash and climbing beans. These became the three main agricultural crops used for trade and food for Native North Americans.

Christopher Columbus was among the first Europeans to have seen the garden bean. He brought it back to Europe from his second voyage to the New World in 1493. The New World legume was immediately confused with the broad bean (Vicia faba), an Old World legume, and thus given the name common “bean”, although the two plants are actually very distant relatives.

The new bean (P. vulgaris) caught on quickly. By the 17th century, it was already cultivated throughout Italy, Greece and Turkey and reaching Africa and Asia. Today, it is grown all over the world.

Green beans were once referred to as string beans due to the long fibrous thread along the pod seams. The first stringless green bean was developed in 1894 by Calvin Keeney who later became known as the “Father of the stringless bean”. Breeders continue to breed this stringless trait into modern genetics. Other desirable traits include dark green succulent pods, good bean flavor, concentrated fruit set, stress tolerance, and disease resistance.

The garden bean is a highly variable species. Originally a climbing species grasping through twining stems and reaching up to 10 feet (3 m) in height, many modern cultivars are determinate, bush-forming types, no more the 8–20 inches (20–60 cm) tall. All varieties bear alternate, green leaves divided into 3 oval leaflets. Flowers are white, pink or purple and about 1 cm in diameter. They largely self-pollinate prior to opening, but not all ovules are fertilized before the flower does open, so that allows some cross-pollination to occur from insect visits. The flowers give way to pods 3–8 in (8–20 cm) long of variable width. The green, yellow, black or purple pods each contain 4–8 smooth, kidney-shaped beans that range widely in color and are often mottled.

The common garden bean is anything but common! Green beans or “snap” beans as they are also called come in a variety of flavors, pod shapes and sizes as well as a colorful palette of colors.

Helpful Hint: For best growth and productivity, add rhizobial inoculant to the garden soil the first time you grow beans. This product, made up of beneficial bacteria, can be found in garden centers, feed stores and online. It forms small nodules on the plant’s roots that take nitrogen from the atmosphere, unavailable to most other plants, and convert it into a form that bean plants can use for their growth. Once in the garden, rhizobia can survive for years on any green matter mixed into the soil, even if no beans are grown, so only the initial treatment is needed.

A good indication of when to harvest is to reference the days to maturity indicated on the seed pack of the specific variety. Pick green beans when pods are young and tender, just before the seeds begin to swell. Beans will “snap” when you bend and break them. If they are immature, they won’t snap!

Fresh unwashed green beans should remain fresh for up to a week when stored in a reusable container or plastic bag in the refrigerator.

Versatile in culinary preparation, garden beans can be eaten raw, steamed, boiled, stir-fried, grilled or baked. For the best eating experience, cooked green beans should still have a crisp texture and an appetizing bright green color.

Bean leaves and flowers are also edible. Simply add them to any vegetable dish for extra nutrition and flavor.

Green beans pair well with a variety of herbs, spices, and flavors. Parsley, rosemary, sage, savory, thyme, a splash of lemon juice or a pat of butter are very popular additions to bean dishes. You can’t go wrong with the simple addition of garlic and onions. There are some who swear green beans cry out for bacon bits or a dollop of bacon grease added to the cooking pot.

Green beans are bred for eating fresh or processing/preserving. Some varieties are well suited for both. Processing beans, such as ‘Goldmine’, ‘Blue Lake’, ‘Tendercrop’ et ‘Kentucky Wonder’, are better able to retain their beautiful color and texture for canning, pickling, and freezing. If you look forward to gifting out jars of pickled green beans, a processing green bean will yield you the best results.

Beans do cause a problem with flatulence, although the degree varies from one individual to another. Beans contain special sugars called oligosaccharides (particularly raffinose and stachyose) which our bodies can’t digest. They make it intact through our small intestine, then bacteria our large intestine finally break them down, causing fermentation and the production of sulfur-rich gas we release as flatulence.

The good news is that there is an enzyme called alpha-galactosidase, derived from the fungus Aspergillus niger, that, if ingested with beans, will prevent the smelly fermentation. So, take an enzyme pill (Beano is the best-known brand) before you eat and chow down on beans to your heart’s content!

Garden beans contain a toxic compound called phytohaemagglutinin which, although not fatal, can cause severe gastric distress. It is found in small quantities and therefore harmlessly in green and wax beans, as well as in leaves and flowers, but can be found in toxic levels in red kidney beans and, to a lesser extent, white ones. As few as five raw kidney beans can cause problems. The compound is largely destroyed by soaking and cooking, so boiling fresh kidney beans in the pod for 30 minutes before eating is recommended. Dry beans need to be presoaked for 5 hours (the water should then be discarded) before boiling for 30 minutes. Outbreaks of poisoning have been associated with cooking kidney beans in slow cookers, as they don’t heat beans to the boiling point and therefore don’t destroy the toxin.

What Is a Bean?

The garden bean (Phaseolus vulgaris) is not the only plant with the name bean. In fact, it isn’t even the first one to bear that name. The title place belongs to the broad or fava bean (Vicia fava).

Other beans, all in the Fabaceae family, include:

And there you have it: the wonderful, productive, delicious garden bean. Where would the world be without it?

This article was based on the Year of the Garden Bean fact sheet from the National Garden Bureau.

Interested in buying garden beans to grow for yourself? Click the here to shop members of the National Garden Bureau.

2 comments on “Year of the Garden Bean”