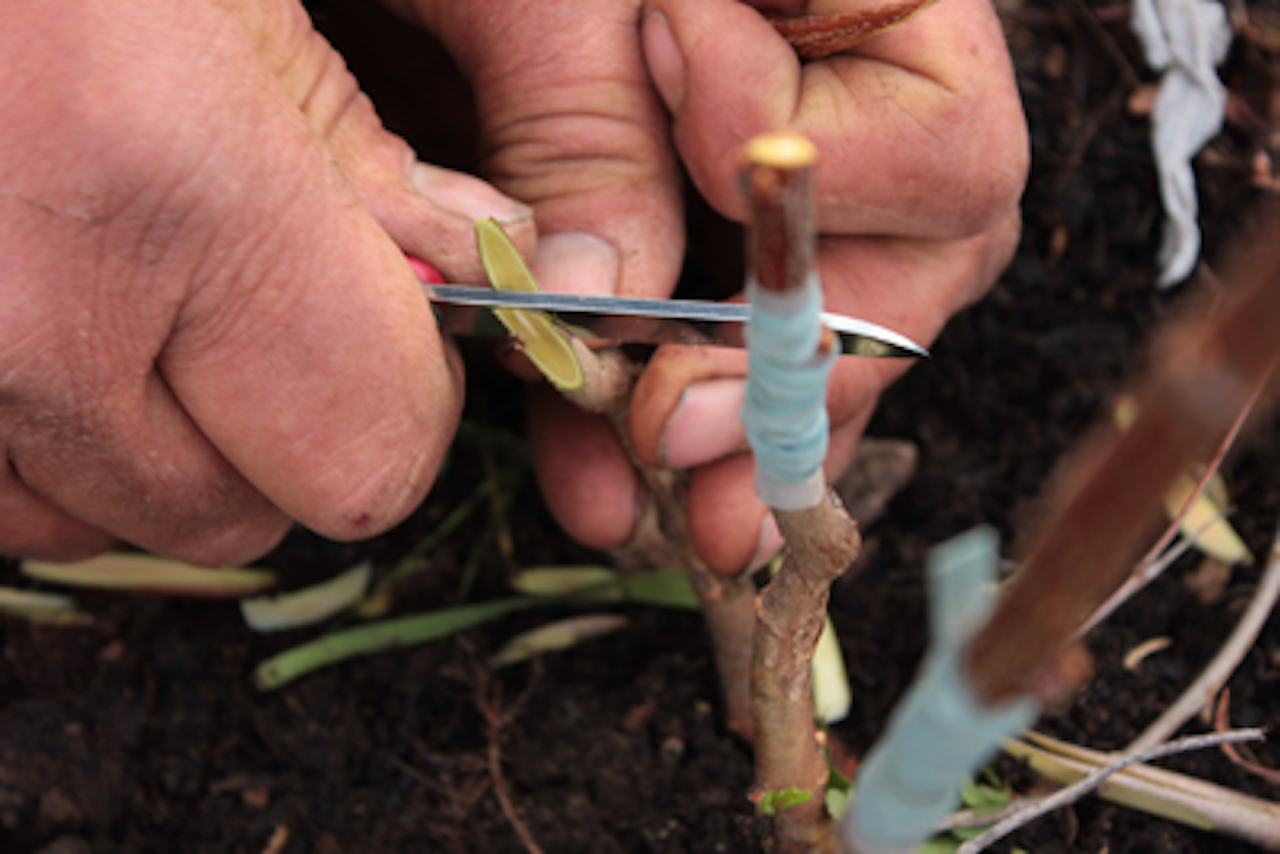 By Véronique Alexandre,
Co-owner of the Hardy Fruit Tree Nursery

Grafting is a technique that has been practiced for thousands of years by many civilizations, particularly in China. It is still one of the most important tree propagation techniques. Grafting can occur naturally in forests when branches of two different trees touch each other, merge, and continue to grow. When people buy fruit trees, they are almost always grafted; especially apple and pear trees. But … what is grafting?

Grafting is used by nurseries for many reasons.

The first and most important reason is to produce a plant variety identical to the original source.

For example, let’s say we have an apple tree of exceptional quality. Here, we’ll use ‘Spartan’ as an example. ‘Spartan’ is such a good apple that you decide you want to fill an orchard with it. But, if you harvest the seeds from a ‘Spartan’ apple and plant them, the trees that will grow from those seeds will not be ‘Spartan’ apples. In the same way that every human being has characteristics in common with their parents, yet is not a carbon copy of them, apples grown from ‘Spartan’ seeds will have some characteristics similar to ‘Spartan’, but they won’t be identical to it. Every seed will produce a somewhat different tree, just as each human being is different from every other, even brothers and sisters. Even the seeds harvested from a single apple will produce trees with different traits.

That’s why grafting is so important: it allows fruit growers to produce exact replicas of a desirable fruit tree.

What is a Graft?

Similar to grafts of human body parts, the grower can take an organ (in this case a bud from the original ‘Spartan’ tree) and insert it into the body (trunk) of a recipient (another apple tree heretofore called a rootstock). Nature does the rest!

Now that the body (tree trunk) and the organ (the bud) are united, sap can travel into the ‘Spartan’ bud and awaken it, and the bud will grow to become the new trunk of the tree. If you look carefully, you can see the scar of the graft (the area where the bud has been grafted). Even after a number of years, the graft scar is usually still visible or else there is an evident change in bark color.

In our own nursery, we only use seedlings as rootstock. This method allows the tree to develop a strong tap root. However, the rootstocks most widely produced on the market are not seedlings: instead, they are propagated by layering, a method in which the shoots of one tree are forced to make new roots. This does work, but it doesn’t result in a strong tap root. Our use of deep-rooting seedlings makes our trees especially suitable for use in clay soils.

Once a tree has been grafted, the fruit it produces will be identical to that of the original tree. You can even use the branches of a grafted tree to graft even more trees!

How Is the Rootstock Used?

The rootstock is the tree onto which bud from the desired variety is grafted, but it’s more than just a source of roots. The rootstock exerts an influence on the tree it supports in many ways.

First, it will determine the eventual size of the tree. Depending on the rootstock used, the final product will be dwarf, semi-dwarf or full-size.

While widely used in commercial orchards, dwarf trees are not appropriate if your goal is for future generations to taste the fruit of the tree you are planting. If dwarf trees are widely used in commercial orchards, it’s largely because the trend in fruit varieties changes about every 30 years—the lifespan of the average dwarf tree. For example, for the past 30 years the ‘McIntosh’ apple has been popular, but ‘Honey Crisp’ is now gaining in popularity.

When choosing a fruit tree, it is vital to select one that is suitable to your local area. If you live in Alberta in hardiness zone 3, you must choose a variety that is cold hardy and appropriate to hardiness zones 1, 2 or 3. Most North American gardeners know this and do pick a tree adapted to their climate. However, what they forget to do is to verify the hardiness of the tree’s rootstock.

For example, take a ‘Norkent’ apple tree hardy to zone 2, but that was grafted onto a rootstock appropriate to hardiness zone 5. Good luck with that! Your tree won’t survive even the first winter, because a tree without roots is no longer a tree! Most rootstocks on the market, even in Canada, were developed in England and produced in the Netherlands, and thus are not appropriate for many Canadian conditions, nor even for the Northern American states.

Do I Need to Give the Graft Any Special Care?

If your rootstock is hardy, the graft will not require any particular care. However, it’s good to know where on the tree the graft union is located.

Any branch that grows lower than the graft union should be removed as its fruits will not be the variety you want. If even your tree is damaged, check whether the damage occurs above or below the graft union. Even if the tree has snapped off above the graft, you have not necessarily lost your grafted variety. It will likely produce a new shoot from above the graft, thus, when it grows back, it will give you the desired variety. If your tree breaks off below the graft, though, you will have lost the grafted variety. True enough, the rootstock will probably recover and continue to grow and eventually bear fruit. However, the quality of the fruit will not likely be as interesting as that of the grafted variety.

Does Grafting Influence the Tree in Any Other Way?

Yes. Grafting influences the time it takes for a tree to produce fruit. An apple tree that is grown from seed (not grafted) will not produce fruit for about 10 years, whereas a grafted apple tree will begin to bear fruit after 4 years. This phenomenon occurs because the bud used in grafting was already mature.

Grafting is also used to control certain diseases. For example, greenhouse tomatoes are often grafted using a similar technique to that used on fruit trees. Some diseases that affect tomatoes are found in the soil, so using a rootstock that has resistance to these soil-borne diseases will allow the grafted variety to grow in complete immunity from the disease. This can happen because only the disease-resistant rootstock is in contact with the contaminated soil.

Grafting is also commonly used in Europe in producing grape vines. This practice began in the 19th century due to a root disease called phylloxera caused by an invasive aphid. European grape vines were badly affected by phylloxera, and it was found that the only way to protect the vines was to graft them on to American vines, as many American grape vine species are naturally resistant to this disease.

This article, along with the accompanying photos, was provided to readers of the LaidBack Gardener blog by the Hardy Fruit Tree Nursery, a Canadian nursery located just north of Montreal in the province of Quebec that specializes in the production of fruit and nut trees adapted to northern climates. Their vision is to provide every individual and farm the possibility of growing fruit trees successfully. They aim to provide clear and simple information through their website so that anybody will be able to grow fruit trees without difficulty. And they ship all across Canada (except to British Columbia) at affordable prices!